The Victimhood of George Takei

In journalism few things prompt greater delight than a juicy yarn of global interest that drops right into your lap. Well, some stories, anyway. The curious case and coverage of actor George Takei, veteran of Star Trek, gay crusader and gushing spigot of innumerable holier-than-thou social-justice tweets would seem to suggest there are rules for some and other rules for others.

Mr Takei, you see, has been accused of groping about in the underpants of a male model who says he passed out on his host’s beanbag after a night of drinking. Given all the ink and pixels and front-page attention devoted to the alleged carnal predations of Harvey Weinstein, Kevin Spacey, Richard Dreyfuss and other Tinseltown titans, you might imagine the actor who played Mr Sulu in Gene Roddenberry’s space operas would be drawing plenty of attention in the local press, as he just happens to be in Australia at the moment and preparing for a lecture tour with his on-stage interlocutor, the potty-mouth Twitter pulpiteer Benjamin Law. It is a sure bet that would not be the case were it Weinstein who happened to be in the country – and the lack of interest is made even more curious by Mr Takei’s giggly admission on the Howard Stern radio show in the US that, yes, he did get frisky with potential lovemates who needed a bit of gentle persuasion. You can hear the interview here. (Warning: severe language alert.)

As of Wednesday, the ABC had covered the harassment allegation – which Mr Takei denies, by the way –only with Associated Press wire copy  while the Fairfax press did likewise via story lifted from the Washington Post. So far, no news editor has dispatched reporters to doorstop the visiting gay icon.

Could the relative lack of interest have something to do with Takei’s politically correct stance on so many issues, from the loathsomeness of Donald Trump to the grim fate of our carbon-plagued planet and the justice of “marriage equality”, a cause to which he has pledged 10% of his lecture tour’s receipts?

Should editors get around to dispatching reporters to doorstop the visiting actor and quiz him about that night, the young hunk and the beanbag, they would be well advised to make sure their minions first read the potted biography prepared by Mr Takei’s Australian publicists. Apart from providing useful background, it might also suggest to some that the 80-year-old actor’s recollections glow with the coloratura of flamboyant gilding. Let one example suffice – although in this instance it is the sotto voce of omission which is remarkable in Mr Takei’s telling of racist oppression (emphasis added):

For the young boy who spent his childhood in an American concentration camp  … California-born Takei and his family were placed behind the barbed-wire enclosures  of  United  States  internment  camps  along  with  120,000 other  Japanese  Americans.  Takei  spent  most  of  his  childhood  at Camp Rohwer in the swamps of Arkansas and at wind-swept Camp Tule Lake in northern California.

The Takei family’s internment, as he puts it, was due solely to racism, in that he, his parents and siblings just happened to “look like the people who bombed Pearl Harbour”. There is no denying it would have been an unpleasant experience to be rounded up in Los Angeles and shipped all the way to remote Arkansas, but there is a bit more to the story than that.

As Takei himself explains 3.15 minutes into the below video, prepared by the Center for Arkansas History and Culture, when asked if they would defend the US against its enemies and renounce any loyalty to the Japanese emperor, his parents’ answer was ‘No’ to both questions. Subsequently, all were shipped to another camp, in Northern California, where US authorities stored the hard cases.

And many internees were very hard cases indeed. While Takei’s press kit references “120,000 Japanese Americans” in “concentration camps”, that’s not the truth or anything like it.

Of those interned, roughly a third were born in Japan, had never been naturalised and remained subjects of Emperor Hirohito. Unnaturalised Germans and Italians were also interned, but if you follow Takei’s selective logic, they’re not worth mentioning because, well, they were white and bad things happen only to people of colour. Some 5,589 Nisei – US-born Japanese-Americans — subsequently renounced their American citizenship and ended up with young George in Northern California’s Camp Thule. Of these, 4,327 US- and foreign-born asked to be repatriated to Japan – this, mind you, at a time when America troops were being killed in their thousands on Okinawa and scores of other Pacific battlefields — conflicts of which, given recent trends in education, a good many members of Mr Takei’s Melbourne and Sydney rainbow audiences will be entirely ignorant. But they will nod in knowing acceptance at his suggestion that Japanese-Americans were locked up solely because of their skin colour and – what’s the favoured term these days? — ah, yes, “otherness”. Daniel Pipes, for one, says that is rubbish.

What audiences also are unlikely to hear is that Mr Takei’s wartime miseries were made much worse by his parents’ refusal to declare their loyalty. While he describes Camp Rohwer as a concentration camp – a description to give any survivor of Buchenwald a good laugh – the fact of the matter is that it was a pretty easy-going place. In the video below, also prepared by the Center for Arkansas History and Culture, a resident of the town recalls how her brother befriended a young internee and would bring him home for dinner.

Mr Takei might even have been a member of the camp’s Boy Scout troupe, whose members are recorded as 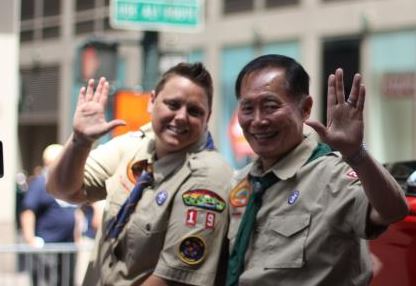 having attended jamborees beyond the wire (above) He has certainly maintained an interest in scouts. That’s him in uniform (right) in later years campaigning for the acceptance of openly gay scouts and scoutmasters. And if he had been older, why he might have left the Camp Rohwer altogether and attended university, as did several thousand students of Japanese background. One was even elected president of the Oberlin College student council while the war yet raged.

There is little chance any of the details above will figure in Mr Takei’s lecture tour, nor is it likely he will advise his audience that all this took place in a different time, under dire and radically different circumstances or that, shortly after the war, Japanese-Americans received compensation for property lost when taken into internment. Decades later, Ronald Reagan authorised payments of $20,000 to each former internee. Any mention of that, however, might disrupt a victimologist’s narrative of how tough it is to be Asian, gay and cursed to exist in the Age of Trump.

Sanctuary for the Testosterone Afflicted