Space Between Their Ears

Recently, we’ve been bombarded with rockets. Well, rocket news actually. First, the lithium showman Elon Musk, Down Under for a bout of mutual admiration with South Australian premier Jay Wetherell, announced half-hour flights to anywhere on earth. When? When he’s got his next-generation spacecraft ready.

All talk fuelled by massive subsidies, the CEO of SpaceX spoke of replacing his current rocket fleet, which so far has only gone up and down, and never threatened a heavenly body. Now he is to send a crewed ship to Mars in 2024. The idea of his BFR or Big F…ing Rocket (which ABC News tastefully didn’t spell out for its viewers) held 3,000 people at the International Astronautical Conference in Adelaide spellbound. Or perhaps not. NASA, for one, was just a little skeptical. It contracts SpaceX to take supplies to the International Space Station, but is building its own rocket system to go to Mars. In the mid-2030s.

Musk’s big problem is cost. He estimates US$10 billion is needed for the BFR project. SpaceX earns fees from satellite launches – 13 this year ­– as well as from servicing the ISS. But if there’s a shortfall, what’s the betting he won’t turn to his favourite project financier, the government?

Then Australia announced its thinking phase was over, and it would definitely create our own space agency. This catch-up with most other developed nations gave everyone a rosy glow of pride. One astrophysicist enthused that by waiting, the smart Down-Underers were able to reduce the huge things in the historic space launches down to the size of toasters. Big savings for a little country. But in all this talk of Mars trips, building a stargate (with a garage stop at the moon!),  it’s been forgotten that the space age began dramatically, without notice exactly sixty years ago today.

In the ’50s, there was not much to do for those of us living in Papua New Guinea, so radio – shortwave radio — gave us a window on the world. The Port Moresby music shop imported the latest Philips multi-band radios. A ready supply of bamboo made it easy to rig aerials, and we soon became expert in tuned dipole arrays. My radio was the most advanced in the Philips catalogue. It had an internal electric motor which whirred to change the frequency bands at the press of the relevant button. (I still have it).

I was scanning the frequencies when a strong signal – BEEP… BEEP… BEEP – suddenly appeared just above 19 megacycles, which at certain times was a good listening area for foreign stations such as the BBC. The signal remained strong and steady, with none of the fluctuations normal in a shortwave signal. When it faded and disappeared after a time, I thought it could be a satellite. When it reappeared on the same frequency about an hour and a half later, I was sure.

The year 1957 was designated the International Geophysical Year, and NASA had announced that it would commemorate the year with its first foray into space, the Explorer 1 satellite. So my initial reaction was that the BEEPS were NASA’s. But if the world had forgotten that 1957 was also the 50th anniversary of the Bolshevik Revolution, the Russians hadn’t.  So searching the airwaves for an explanation I heard a triumphant announcement of the feat from Radio Moscow, and learned that the USSR had got there first.

Sputnik 1, we came to learn, was a polished aluminium alloy sphere, 23 inches in diameter, weighing 83.6 kgs, built from two hemispherical shells bolted together and pressurized with nitrogen gas. It carried two transmitters, broadcasting on 20.007 m/cs and 40.002 m/cs.  The simple signal seemed to be thumbing its nose at the world.

For me, the sequel to the evening’s discovery was shocking, but later hilarious. In those days, there was not continuous telephonic or telegraphic communication between PNG and Australia. OTC, the Overseas Telecommunications Commission, provided the international link, but when it closed down for the night reporters could request a special opening. We would take our copy out to the transmitter station near Jackson’s airport, where the operator would punch it into a tape and send it by automatic morse code.

I thought I had a scoop, and waited excitedly for the morning’s national news bulletin from Australia. Nothing. A few hours later came a telegram from the ABC’s chief of staff in Sydney asking what I had been drinking, and hinting that I had perhaps gone “troppo.”  The official news confirming my report didn’t come out till later in the day. Of course I never received an apology from Sydney. 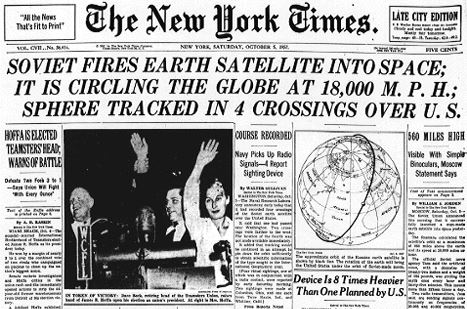 The space race took off in 1957, since when inordinate amounts of money have been expended on increasingly futile ambitions to poke about on far-away stars.  Since nothing out there has been found to be remotely habitable, it’s a great surprise that the populace at large has not risen up in revolt at the cost.

A few years ago I talked with Harrison (“Jack”) Schmitt at the Udvar-Hazy Space Centre in Washington, and reviewed his book, Return to the Moon  for The Australian. Harrison, a geologist, was the last man to walk on the moon, and proved its resource of helium-3 could provide an infinite source of fuel for a fusion electrical power industry. It was the last sensible proposal made for expenditure on space.

The War on Tommy Robinson

Wasting Breath On The Shrieking Left