The surprise announcement to the High Court by his barrister, David Bennett QC ended weeks of unnecessary speculation about his status. Senator Canavan’s Italian citizenship is due to a change to the citizenship rules in Italian law (Disposizioni in material di cittadinanza) n. 123 of April 21. 1983. There really is no excuse for the facts not to have been known, and explained by Italian consulate authorities a month ago.

When Senator Canavan resigned from Cabinet on July 25, he said:

“In the short time available I have not been able to obtain definitive legal advice as to whether my registration as an Italian citizen, without my knowledge or consent, was valid under Italian law.”

He was then under the impression that the issue of Italian citizenship could have been due only to the fact that in 2006 his mother had applied for citizenship and had added his name to the request without his knowledge. It now appears that what might have happened is that when she made her application and it was granted as a mere formality because she already enjoyed Italian citizenship by virtue of descent from her Italian parents.

It might well also have been explained to her that her son was also an Italian citizen. We don’t know, but this is what should have happened if the consulate in Brisbane had been properly aware of the implications of Law n.123 of April 1983.

There is no difficulty establishing the facts with a simple Google search. With three clicks I was able to turn up this flowchart which could have given Senator Canavan the correct answer to his question, last month: 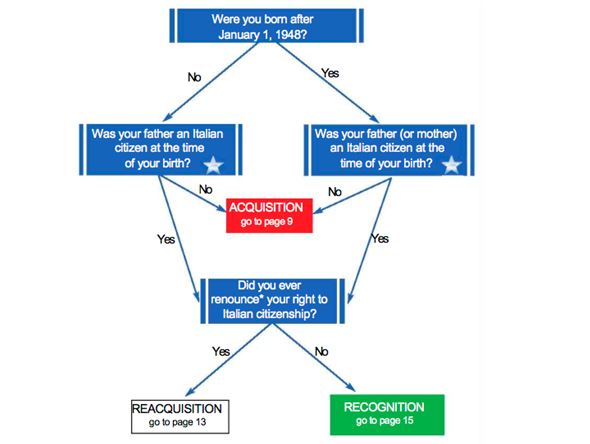 The 1983 law extended the entitlement to Italian citizenship to his mother and, therefore, automatically to him. I’m not at all surprised an Italian consulate seems to have got Senator Canavan into this mess. My own experiences is that there is both an ignorance of the law and a dissonance between consular advice and on-the-ground practice.

In 1986 my wife and I went to Italy for a holiday and house-hunting. We found and arranged to buy a ruined farmhouse in rural Umbria. Returned to Sydney, we completed the purchase by remote control through an avvocato in Florence. Two years later we shipped over some furniture and furnishings and my wife flew there to take delivery. Then we rented the house to friends for a year or so. In 1990 we sold up everything in Australia and moved to live permanently in Umbria.

The Sydney consulate insisted that we had to have a visa to enter and reside in Italy, but local advice was that all we needed was a permesso di soggiorno (residence permit).  Indeed, this satisfied the local authorities. We never did obtain a visa; coming and going over eleven years we were never once asked why we were entering Italy; our passports were hardly ever stamped.

The Portugese were also confused about European requirements. On a Sydney visit we once checked with their consulate on whether we needed a visa to visit Portugal, explaining that we were resident in Italy. “Of course” was the reply. But the visa had a duration of only 90 days, and we weren’t flying from Rome to Lisbon for five months. What to do?

The first advice was that if we couldn’t make the visit in 90 days, we couldn’t go. Then, relenting, we were told we might be able to get a visa from the embassy in Rome. When we phoned the embassy later, they didn’t want to know us, so we went anyway.

Our arrival at Lisbon airport was hilarious. Dutifully, we tried to present our Australian passports at the arrival gate for non-Europeans, only to be waved away. We had been saved by Shengen! Didn’t we understand? Arriving on a flight from Rome meant the border didn’t exist. We were automatically guaranteed entry, despite or irrespective of our Australian citizenship!

Law n.123 of 1983 entitled us to apply for Italian citizenship after ten years residence. We qualified, but declined the kind offer of our village sindaco (mayor) to sponsor us. Italy was a beautiful, fascinating, enchanting place to live for a time, but we didn’t want to take on its responsibilities as citizens.

Geoffrey Luck’s Villa Fortuna, told the story of their 11 year sojourn in Paciano.

God of Man and Cockroaches