How do we deal with North Korea? This is the perennial question, going back to the last decade of the twentieth century. In response to recurring posturing by Pyongyang, successive US administrations have concluded so-called agreements with the rogue state, facilitating aid in return for the regime promising to suspend its nuclear program. As should have been expected, such agreements have proved worthless. Both Kim Jong-il and his son, Kim Jong-un were emboldened and the result is a greatly enhanced and a possibly irreversible nuclear shield.

How often do you hear repeated the popular mantra that Kim Jong-un is a madman likely to start a nuclear war any moment, that he is prepared to risk self-destruction in a final gotterdammerung? Yet, whilst Islamic totalitarians may welcome death in exchange for paradis and 72 virgins, Kim Jong-un, like the communist totalitarians of the twentieth century, is only interested in a socialist paradise in the here and now. Like Stalin and Mao, he is a survivalist.  His ideology is evil and insane but in terms of regime survival, Kim Jong-un is tactically rational. Playing the irrational madman is one of the oldest tricks in the totalitarian rule book, designed to keep adversaries in a permanent state of uncertainty.

Far more likely is that the possession of nuclear weapons is the last line of defence for North Korea. For all the belligerent talk, it would seem unlikely that any rocket fired from North Korea would strike the territory of any adversary, except by accident. Firing missiles directly over Japan, as he did this week, cements the madman image and strategy. The prime aim of Kim Jong-un is to sustain his evil regime and profitably exchange nuclear technology with other thug states around the world.

What is China’s role in this current crisis? There is much, possibly misplaced, hope that China might be induced to effectively restrain North Korea.  Whilst China joined in the unanimous UN Security Council resolution, tightening economic sanctions against North Korea, we await clear evidence that China is fully abiding by its commitment. In any case, there is little evidence  the sanctions will slow Pyongyang’s nuclear program. Instead, the regime, accompanied by xenophobic propaganda, will make the condition of much of the expendable populace even worse. China may be content to play the good cop, bad cop routine,  happy to keep the United States and her allies permanently distracted by Kim Jong-un’s antics. I suspect that China would like to see the United States engaged forever and a day in futile efforts to negotiate some sort of settlement.

(a)  North Korea has to survive as a political entity in alliance with China. Its collapse would create an enormous problem for China which could be forced to take over the territory with its millions of half-starved potential refugees.

(b) China will never countenance a reunited Korea under the auspices of Seoul.

(c)  China will surreptitiously countenance North Korean belligerence to the extent that China’s growing power in the region is unimpeded and American power and influence continue to diminish.

However, if North Korea’s belligerence serves to create an opposite effect, namely a strengthened alliance between the United States and South Korea, Japan and even Taiwan, or worse still, from China’s point of view, a nuclear-armed Japan and South Korea, China’s hegemonic ambitions would suffer a serious reversal. Could the possibility of such an outcome have a crucial effect on China’s relationship with Pyongyang? 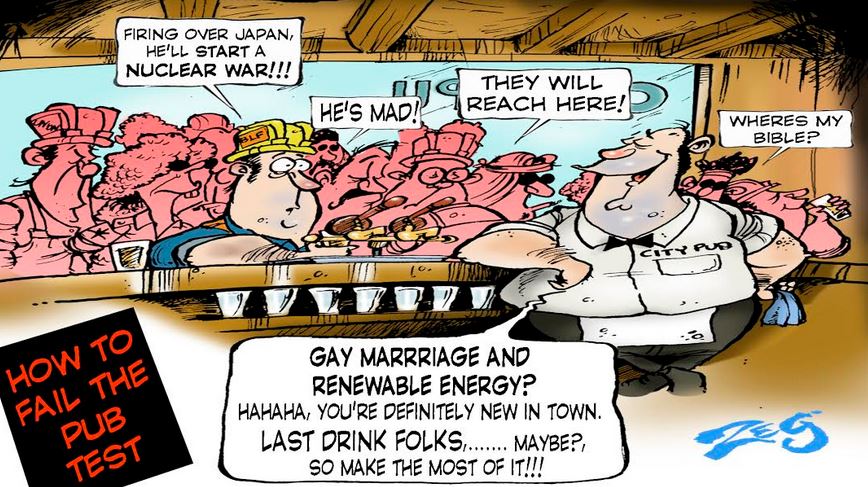 Much speculation has centred on the risks of conflict between the United States and North Korea and the potential destruction and loss of life in a North Korean artillery attack on Seoul. China and North Korea both know that the United States suffers from a humanitarian handicap. Much as the Trump administration would like to take out North Korea’s nuclear facilities, it must find a way to avoid the death thousands in the process. The risks are enormous. There are many reasonable analysts who have judged the price of war with Pyongyang too high to pay.

In terms of nuclear proliferation, the horse, as the saying goes, bolted long ago. In our region, China has both pursued its hegemonic ambitions and in substance, if not in stated policy, allowed the rise of a nuclear armed North Korea. We should deal with the challenge in a broader context. During his election campaign, Trump suggested that both Japan and South Korea could acquire nuclear weapons. At the time, this was taken as a sign of Trump’s isolationism and notion that erstwhile allies could go it alone.

However, the threat of a nuclear armed Japan and South Korea could be integrated into a deliberate strategy in our dealings with China. If China continues to play the rogue card, well, so can the Americans. That China and Russia were so unhappy about the installation of the THAAD anti-missile system in South Korea is eloquent testimony to the potential power bargaining which the United States and its allies could engage in.

In other words, China will engineer regime change in North Korea only if and when her own interests are at stake. In the meantime, we face no good choices.

Why Men Should Have a Say on Abortion

Before We Contract the French Disease