Recently, our elected representatives in Canberra sought public submissions to aid their inquiries into “the status of the human right to freedom of religion or belief”. The offerings — 189 of them and all available here — make for interesting reading, reflecting as they do the positions and passions that theists and atheists alike inevitably bring to any and all discussions of the Divine’s place in a secular world. Given the current flap prompted by Turnbull ally and minister Christopher Pyne’s unguarded explanation of an apparent plan to renounce the election season’s promised plebiscite on gay marriage and legislate that change via the backdoor of a private member’s bill, many will find one submission in particular of immense interest.

The author is Tasmania’s former anti-discrimination commissioner, Ms Robin Banks (pictured), whose six-and-a-half-year tenure ended in January.  Whatever her other achievements, Quadrant Online readers might foremost recall her embrace of the complaint from a transsexual Greens political candidate, Ms Martine Delaney, against the Catholic bishops for daring to articulate in an entirely civil and innocuous pamphlet their faith’s belief that marriage is and should remain a mixed-gender affair. Ms Banks accepted the brief, demanding with the full weight and voice of a government agency, budget and legal department that the bishops show cause why they should be allowed to indulge what they must have assumed in their innocence to be no more than the exercise of their right to free speech.

In proceeding with Ms Delaney’s complaint, Ms Banks accepted the premise that articulating a position with which a gay person disagrees can been regarded as discriminatory and illegal in and of itself.

As it happens, Ms Delaney withdrew her complaint before a formal finding, although some might think her goal had been emphatically achieved: get on the wrong side of a fashionable issue and you will find yourself slandered and reviled, while simultaneously being forced to spend time and money on lawyers — resources the bishops might otherwise have invested in good works.

It’s called “lawfare” and, as Andrew Bolt and Quadrant‘s James Allan have observed, the former from from bitter experience, the end result is largely irrelevant because the process itself is the punishment. Had Bill Leak not been hounded into a premature grave by Ms Banks’ federal counterparts at the Human Rights Commission, he might further have expanded on the point.

Shortly before she departed her Tasmanian sinecure, Ms Banks filed a 17-page swansong with the federal inquiry. Submission #6 can be downloaded and read in full by clicking here. Legal scholars are especially invited to cast an eye over it, as their expertise might serve to reconcile what, to the unversed layman, seems a document written in the bold ink of contradiction. Rather than attempt a summary of Ms Bank’s perspective, thereby risking misinterpretation, excerpts from her missive are reproduced below as screen grabs with, where appropriate, the emphasis of a yellow marker.

The federal government recently stated its intention to make citizenship contingent on passing an english comprehension test. Were Ms Banks’ document the subject matter, these summations of her positions would likely appear on many papers:

Perhaps these conclusions are misguided, so let Ms Banks have the last word. Excerpts from her submission are reproduced below. Click on any image to render it larger and more legible. First comes the assurance that those inclined to a belief in the Almighty have nothing whatsoever to worry about. Bear it in mind as you read subsequent excerpts.

Directly prior to the above excerpt, Ms Banks cites a UN agreement — Article 18 of the International Covenant on Civil and Political Rights — prohibiting religious discrimination except in the interest of “public safety, order, health, or morals or the fundamental rights and freedoms of others.” This seems reasonable enough if, say, the creed in question is the Cult of Kali and Thuggee adherents venerate their goddess by strangling strangers.

However, if we are to go by Ms Banks’ prosecution of Ms Delaney’s gripe against the Catholic bishops, it seems that irritating a Greens candidate of fluid gender with one’s opinion on the legal definition of marriage also violates the “fundamental rights of another.”

The “right” to suppress opinions by those who find them disagreeable, apparently.

So Parson Smith and Father Jones can turn away from the front door of manse or presbytery a same-sex couple demanding that their union by sanctified. Perhaps even turn them away with the advice that headline-seeking provocateurs should proceed to the ever-trendy Gosford Anglican Church, where terminally hip vicar Rod Bower has made a billboard of his eagerness to help out. 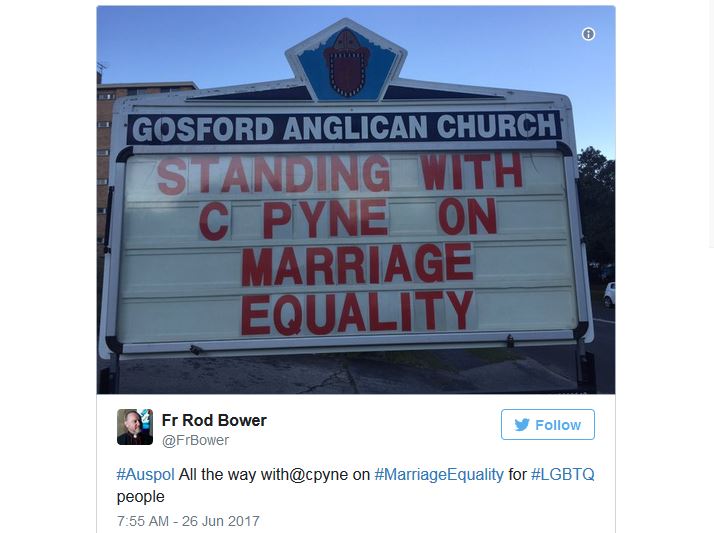 So the issue isn’t that a religious gay wedding isn’t available; the Reverend Bower makes it clear that such ceremonies are readily obtained. No, the real issue is that some clerics won’t countenance such unions. But Ms Banks has said that is OK, they don’t have to go against their consciences. Remember those first excerpts?

Or did she say that? Hmmm.

So, men and women of the cloth are to hold no opinions on what is “morally appropriate”? Surely not, as the advancement of sound morality is their stock in trade. But that is what Ms Banks asserts. To carry that off without a blush she invokes a spurious racial analogy: no known faith nor churchman objects to those of one skin colour marrying another of a different tint.

As for “refusing to solemnise” a marriage “between divorcees”, let’s just say the Catholic bishops had better brace for more lawfare, as their church does indeed prohibit such unions. Yet according to Ms Banks, they shouldn’t. Keep those lawyers on retainer, Your Graces.

Those “goods and services”, of what might Ms Banks be thinking? Keep reading

Now study the paragraph below and be scared, indeed terrified, of its author’s presumptions.

The religious view of morality must submit to “community standards”, most particularly when those articles of faith are “outdated”.

And who gets to define and enforce those “standards”.

The War That Shall Not Be Mentioned