Kill Political Correctness or It Kills Us

It is easy to be cynical about pop singer Katy Perry’s appeal during the June 4, 2017, One Love Manchester benefit concert for members of the audience to touch the person next to them and say, “I love you”. The all-star performance commemorated victims of the terrorist attack carried out after an Ariana Grande show at Manchester Arena on May 22, resulting in 22 deaths (many of the victims young girls) and 119 people injured. Given that only the day before One Love Manchester, Saturday June 3, another terrorist assault, this time in the vicinity of London Bridge, left eight people dead and 48 injured, the all-star concert assumed additional meaning.

Some with longer memories, of course, might have remembered all the way back March 22 when Islamic State sympathiser, Khalid Masood, drove a vehicle into pedestrians on the south side of Westminster Bridge and Bridge Street wounding 50 people, four of them fatally.

Some construed Perry’s plea as foolish, even delusional: “It’s not easy to always choose love, is it? It can be the most difficult thing to do. But love conquers fear and love conquers hate. And this love that you choose will give you strength, and it is out greatest power.”

I, too, was ready to dismiss her “little exercise of love” as utterly facile, and yet she is halfway to the truth. “Love”, courtesy of our Judeo-Christian origins, really is one of the attributes of Western civilisation. That said, we need to add the caveat that love, in the sense of transcending the tribal and acquiring a universal quality, has a post-Christian flavour today. Still, something Christian remains in our increasingly post-Christian worldview. There are those who would contend that we have, by and large, eschewed the religious dimension of our traditional faith – “Love the Lord your God with all your heart and with all your soul and with all your mind and with all your strength” – while maintaining the Golden Rule aspect: “Love your neighbour as yourself”. 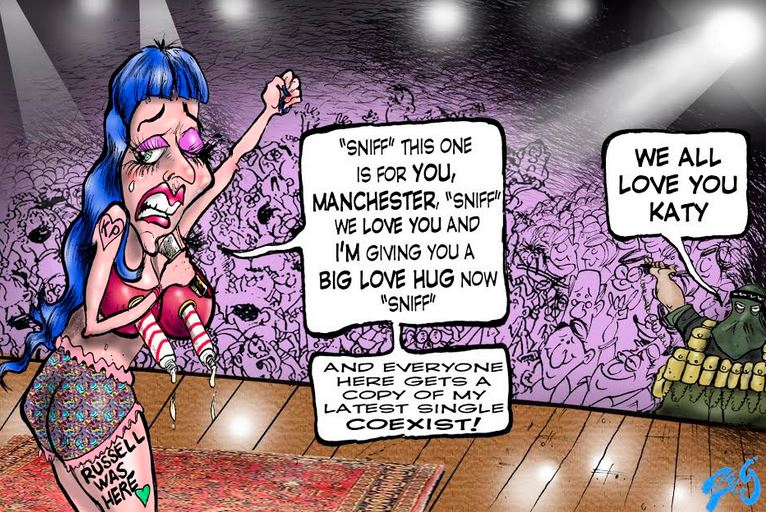 Unconditional love is in the air and I hope some young Muslims, in the United Kingdom, Australia or anywhere for that matter, were inspired by the good vibrations emanating from One Love Manchester and have elected to shun the homicidal tribalism of Sudden Jihadi Syndrome. We can hope.

But I take issue with Katy Perry’s entreaty on two grounds. First, her claim that it is “not easy to always choose love” does not persuade me. The kind of all-you-need-is-love sentiment expressed by the pop diva at the One Love Manchester does not contravene PC orthodoxy and PC orthodoxy, being the dominant ideology of our brave new world, is always the easiest line to take. Consider, for instance, the admonition dispensed by Stevie Wonder in his pre-taped segment: “I don’t care what ethnicity you are, what religion you are. Love really is the way. So anyone who tries to make anyone think that things of destruction has [sic] anything to do with God or Allah, they’re a liar. Yes, I stand with you Manchester.”

I suggest that if Stevie Wonder, or some other showbiz celebrity, had made the following message it would not have received an airing at the One Love Manchester concert: “Islamic revivalism, in the form of Wahhabism and the Muslim Brotherhood, has been the ruination of many young Muslims in the United Kingdom. So anyone who does not address this developing calamity, they’re an enabler of terrorism. Yes, I stand with Manchester.” Now that would have been impressive. Love – at least in the way the PC brigade frames it – turns out to be very “easy to always choose”. The road not taken is the one without cheery platitudes plastered on every passing billboard.

I would also take issue that “love”, of the unthinking and indeterminate kind, is “our greatest power”. It was the West, Robert Irwin argues in For Lust of Knowing, which invented modernity and our prevailing sense of the universal, and the Islamic world has been alternatively playing catch-up (Mustafa Kemal Atatürk’s Turkish Republic) or regressing to the seventh century (Hassan al-Banna’s Muslim Brotherhood) or both (the Islamic Republic of Iran’s quest for nuclear-weapons capability) ever since.

Great Western minds (à la the Orientalists) explored and scrutinised for more than 500 years the Greater Middle East not with dull-witted and incurious PC love but a genuine scholar’s passion to know. Now cultural relativism reigns supreme in the academy and Islam, as the 101-year-old Bernard Lewis noted in Reflections of a Middle East Historian, “enjoys a level of immunity from comment or criticism in the Western world that Christianity has lost and Judaism has never had”.

We can sing and dance and touch the person next to us and tell them we love them just as we love our enemies. But to love our enemies does not mean they automatically cease to be monsters wanting to butcher our innocent children. Candidate Trump was excoriated by the PC brigade for his assertion that America (and by inference the West) should “figure out what the hell is going on” in the Islamic world, and yet there was more honesty and truth in that one line than anything the professorial Barack Obama ever said on the subject or ever will.

Salafi jihadists – that is to say violent jihadists – want to exterminate us because we are non-believers or kafirs. I am not convinced that if I were at a Katy Perry performance, seated next to the likes of Nawaf al-Hazmi, Khalid Masood, Salaman Ramadan Abedi, Khuram Butt, Omar Mateen, Yacqub Khayre, Mohamed Lahouaiej Boulel, Rizwan Farook, Tashfeen Malik, Dzhokhar Tsamaev, Amedy Coulibaly or Saïd Kouachi, that it would be prudent to obey the singer’s directive: “Just touch the next person, touch the person next to you. Make human contact. Tell them ‘I love you’, look in their eyes, say ‘I love you’”. What if the person you touch were adorned in an improvised explosive vest, packed with ball bearings, nails, screws, bolts and other objects to maximise the number of kafir casualties and, worse, their clammy finger was on the detonator?

To be fair, encouragement “to choose love even when it’s difficult” might have had a positive effect on some prospective Islamic State followers, the low-hanging fruit, to paraphrase Tanveer Ahmed, ripe for recruitment by violent-jihadist operatives. Maybe we kafirs should not be squashed like bugs after all. Then again, pop-star idealism might be a case of not just simple naiveté but of self-abasement and dissoluteness in the eyes of nascent jihadists.

What the West requires right now, more likely, is for the political class – along with educators, academics, writers, artists, journalists and, yes, celebrities – to stop hiding behind politically-correct bromides and re-claim some of the tough love of our Orientalist antecedents. Chérif Kouachi, after his arrest for the Charlie Hebdo atrocity, denied he was a criminal: “We are not killers…This isn’t us. We have an honour code in Islam.” Instead of blithely exonerating Islam, the survival of our liberty-loving civilisation depends on us exploring and scrutinising, and making known to the general public, exactly what Chérif Kouachi means by “an honour code in Islam”.

The big lie is not, as Stevie Wonder maintains, that there’s no connection between Allah and violence. The big lie is to claim that there is no connection between Allah and violence. The two previous sentences almost sound the same but actually express totally opposite views. That is the dark magic of PC thinking: it subtly inverts the truth and leaves us feeling virtuous while literally and metaphorically disarming us against our nemesis.