Those with heads still below the clouds and feet firmly on the ground – or simply with heads not in the sand — should be readily able to accept several fundamental truths about Islam and the West.

First, we are at war. The enemy is a soldier, not a criminal.

Second, the enemy and his motives and methods are in plain sight, not remotely a mystery.  What inspires them might be incomprehensible to any sane observer, but the bitter fruits of that inspiration are clear as day.

Third, there are ways to respond other than through vapid hand-wringing, hand holding, candle-lit vigils and impotent head-shaking.

Fourth, it is not too late to act, despite decades of poor decisions in the West.

These truths are clear to me, though plainly not to everyone. There is a broad lack of will to recognise this escalaing war and, more culpable than even that, a refusal to identify an enemy, other than dressing him in palliative euphemism. Why this is so, take your pick.  Academics have sought to instill an unshakable deference before “the other”, also infusing with reflexive horror the very thought of standing up for, or even recognising, the existence and virtues of Western values, especially Judeo-Christian ones. There is also queasiness at the thought of being called to fight a war in an age of comfort, endless distractions and, let’s be blunt, spinelessness. Top off that list with a simple lack of understanding of how to fight back and then, to complete the recipe, add the mandatory dash of “tolerance”, which apparently means we must tolerate the intolerant and intolerable.

The sneering green Left likes to brand all who dispute global warming as “climate deniers”, which is funny when you think about it because temperatures have flat-lined for almost 20 years, the IPCC admits its models have been hopelessly out of whack, and every Flanneryesque prediction of doom by roasting or melting inevitably falls on its face. There is nothing there to deny, in other words, except rent-seekers’ press releases.

But Islam’s propensity to inspire murderous assaults, well that is very much “there”. Blood on the streets of Manchester, London and, as of last night, the Melbourne suburb of Brighton, attests to that. Yet here, where the evidence of a palpable threat is beyond dispute, a virulent denialism flourishes. Often it is encouraged and abetted by those most loud in their climate alarmism. The infamous episode of Q&A, in which junketeering warmist Lawrence Krauss cast aspersions on whitegoods by way of dismissing Islamic butchery, provides a priceless example:

TONY JONES: Lawrence, we see that Trump is stepping back from some of his positions. Will he step back on…? He’s obviously got within his administration people who are serious climate science deniers.

LAWRENCE KRAUSS: Yes, he certainly does.

So let us start, first of all, with the Kraussian doctrine of dismissal by diminution. “More chance of being hit by a falling fridge than by terrorism,”  the great mind pronounced. Tell that to a Coptic Eqyptian, buddy.  True or not — and it most certainly isn’t —  you are still left with the fact that such logic is irrelevant and, ultimately, entirely meaningless.

Then there are those who simply cannot see any evil whatsoever in Islam.  This is the Religion of Peace™ brigade, the ones who insist the threat starts and ends with those “lone wolves”. They swear there is nothing to see here, shrink from appending the label “terrorist”. That would be simplistic stereotyping, don’t you know.  More than that, describing someone as a terrorist poses the obvious question: to what end are little girls being blown up and Saturday night revellers knifed? The answer is so obvious denialists cannot utter it, nor will they sit silent and let others do so. The person who speaks the self-evident truth must be torn down, blitzed with a Twitter storm, made the object of ridicule and shunning.

While it seems hardly believable anyone would think this way, many political “leaders” find it convenient to pay lip service.  The protagonists of this line cast the enemy as a “criminal” and support only law-enforcement responses. How long might World War Two have lasted if every Luftwaffe pilot downed over Britain were to have been put on trial, with attendant costs and delays. Fortunately, in those days, the ability to recognise a war and discern its foot soldiers had yet to be eroded by cant and cowardice.

Whether belief in the caliphate or a tendency to jihadism is the core business of any or all forms of Islam or merely the whacky obsession of the very few doesn’t matter in practical terms. There are people with certain beliefs who are eager to kill us, that is what matters and, just at the moment, the only thing that matters. Seemingly, many of their co-religionists either agree with the killers, support them actively or passively,  give them cover in the Muslim enclaves in Paris, London, Brussels, Manchester or wherever. 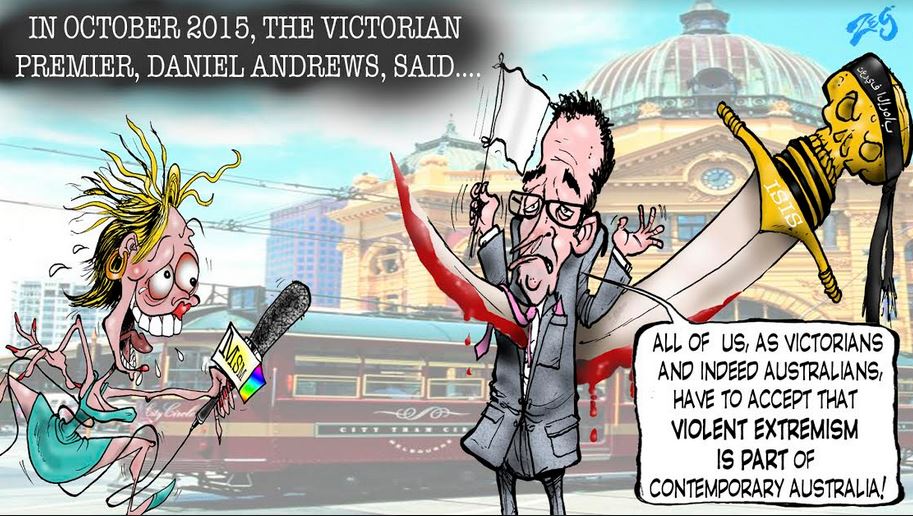 On the other side of this particular debate, those who do see a war (and believe it is worth fighting) often get caught up in the task of rebutting the lone-wolf, malevolent-nutter view of jihadism. Such responses, too, are largely irrelevant.  In the end, it doesn’t actually matter whether or not jihadism is the result of a spurious interpretation of the Koran, or if that reading is front and centre.  Let Muslims and theologians argue the toss on that one. The key issue is that innoents are being killed by those of whose beliefs there can no be a scintilla of doubt. Defining what constitutes a moderate Muslim is a no more than a distraction at the dark end of a cul-de-sac.

Then there are the libertarian/globalist open-borders folk who baulk at border protection measures as an infringement of freedom of movement, who mock walls, either physical or through policy. Libertarians should re-read their Robert Nozick and ponder the first task of government in a minimal state. Or, if Milton Friedman is more to your taste, review his thoughts on the incompatibility of open borders and the welfare state. Sorry, guys, your theorising about a perfect, border-free, libertarian world   isn’t remotely convincing.

Then there are the multicultis who simply cannot recognise that immigrants in Western countries – certainly recent waves – do not assimilate to anywhere near the degree their hosts have every right to expect. This is both a consequence of policy and migrants’ own convenience,finding it more congenial and les challenging to live among their own and transplant their old ways in toto to new lands. Champions of this separatism belong to either the “it’s great to have foreign restaurants here” brigade or adhere to the “we are white and boring” line.  There can be no doubt innovation and technical progress are enriched by the cross-fertilisation of ideas that can come from inter-racial and inter-cultural mixing.  But this happens much, much less than it should in most contemporary high-immigration societies.

Finally, there are the dim-witted politicians who, over the decades, have fallen for some or all of the above twaddle, and who now, like the egregious Merkel, must somehow deal with the smelly parcel of mass immigration they have dropped their own laps. The seething banlieues of Paris and no-go parts of London and the north of England are the catastrophic evidence of their folly. The French priest recently decapitated in his own church a case in point.

Islam denialism has many faces, as we can see.  But its overall impact is to lead the West into a swamp of frozen-in-the-headlights, do-nothing capitulation.  Jihadism loves a weak horse, as no less an authority on the subject than Osama Bin Laden reminded his followers — and us, if we care to listen.

There are strategic and tactical responses aplenty to terrorism and to jihadism. But first we must recognise the plain truths of our predicament. That means calling out and shaming the deniers loudly and clearly and persistently. It should not need to be done, but in this world they have wrought, there is no alternative.

22 thoughts on “The Islam Deniers”

A pronounced dislike for Abbott

The Day the Russians Came