Ever wondered how intensive is green-Left indoctrination in the school system? One example: Australia to Z, a textbook for schoolchildren 12 and upwards, pushing a nakedly leftist agenda. The book is accompanied by the publisher’s massive and even more rabid  “Teachers’ Notes” which seeks to get the kids out on the streets and campaigning on fashionable Left issues.

Studying these tracts, I felt I was missing something. Then it hit me that the class environment must now  be so palpably green/Left that teachers see no need even for a token effort to offer kids a counter-view. “On the one hand” — but there is no other hand. Yet on first principles, roughly half those kids’ parents vote conservative and their taxes pay the salaries of these supposedly non-partisan government workers.

Australia to Z by is Swiss-born artist Armin Greder. The publisher Allen & Unwin touts it as ideal for secondary schoolers. The alphabet-based picture book comprises 32 pages and 40 key words by Greder. But the  Teachers’ Notes by Queensland educationist Dr Robyn Sheahan-Bright run to 6000 words across 23 pages.  Readers can download the .pdf by clicking here. Flip to Greder’s letter “R”. It’s “R for Rupert”, a snarling, eyeless and jowly caricature of the global media tycoon. Sheahan-Bright prompts kids, “What features are particularly pronounced in this portrait? What does this portrait suggest about the subject?”

It seems that Murdoch derangement syndrome is fertilised early. In Orwell’s 1984, Oceanians each day have to watch a film of the Party’s enemies and then do a “Two Minute Hate”. Maybe that’s what teachers are enforcing about Murdoch.

Sheahan-Bright writes, “The opening page features a child draped in the flag, and another hoisting it – both indicative of the fact that xenophobia, jingoism, extreme nationalism, and prejudice are learned at a parent’s knees.” Any mum or dad with patriotic leanings clearly has a lot to answer for. She urges kids to make their own nationalistic cartoons involving black humour or satire –   ruling out any lurking positivism.[i]

The book’s last page sets out the lyrics of Advance Australia Fair. But alongside, as Greder’s ironic juxtaposition, are drawings of a boat-people family greeted with a sign, “Go Back – We’re Full”; three bald, singleted yobbos chanting “Ozzy Ozzy Ozzy”; and another Ocker celebrating with a beer can. Sheahan-Bright views the page as “a salutary reminder that perhaps our founding values are not best served by the current [2015-16] political and cultural agenda.” Her verdict in the Teacher’s Notes is that Greder’s alphabet is  “a disquieting and potent” and “profoundly significant” work. “This is an extremely important text with relevance for readers of all ages. It is also destined to become a contemporary classic,” she rhapsodises. 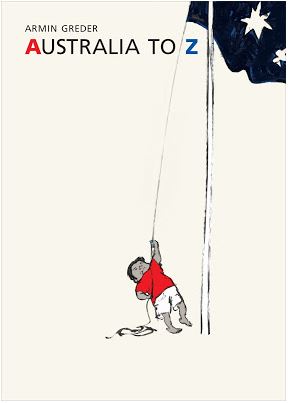 Sheahan-Bright urges teachers to discuss with kids “offshore detention of illegal arrivals and refugees and whether that represents a humane policy”. Another topic suggested is National Sorry Day about European settlement, qua “invasion”. Kids are urged to become after-school activists supporting or protesting an issue selected by the teacher (one can imagine the choices – I don’t think protests against Gillian Triggs would be one of them).

“Create a campaign with your class”, Sheahan-Bright urges teachers. But she adds in an arse-saving aside, “Note, though, that not all students may wish to become involved.” I imagine any such juvenile recalcitrants being herded into a ghetto for wrong-thinkers. Sheahan-Bright says a “concerned group” can do protests via public demonstrations, media advertising campaigns, billboards, and street graffiti. Kids are to research the legality of such modes – “sometimes graffiti artists become well-regarded and even famous for their protests”, she says. Internet sites she recommends include Chilout – Children out of Immigration Detention; “The Facts About ‘Boat People’ – the Government and media are Lying’; GetUp!; and “The 25 Greatest Australian Graffiti Writers”. No site that she lists puts the case for secure borders.

Alphabets are thought to be the province of young children, she writes, “but here the format has been used to engage with adult concepts and topics in a cryptic and powerful way”, referencing “our sometimes myopic foreign policy and our national insularity.” Greder includes drawings of tradies and laborers, whom Sheahan-Bright finds confronting. In S for Stubbies,  for example, there’s a tradie in a bar in shorts, with a stubbie of beer.  “What does the combined image suggest about our culture?” asks Sheahan-Bright,  fishing for negatives. 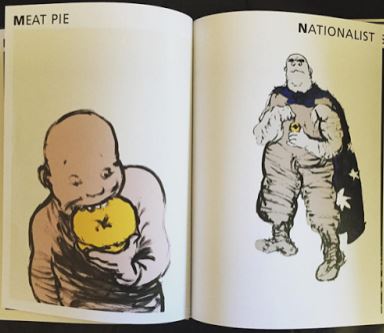 Y for Yakka shows a road-laborer type swinging a pick. Sheahan-Bright for some reason decides “this image has a threatening aspect to it. What does it suggest about work? Or about this worker?” Maybe she’s never met a laborer. As for Greder, he writes, “I am fortunate: I have a pension that keeps me afloat and saves me from having to waste time on what is commonly called work.”

For “N for Nationist” the workaphobic artist has  drawn a bald, fat, squint-eyed thug with beer can, draped in the Australian flag and wearing military boots. The preceding page, “M for Meat Pie” shows a juvenile version of the thug, about six years old, shoving a whole pie into his craw. As our teachers’ guider puts it, the adult thug is suggestive of “how this child may develop”. A pie is ominous food, apparently.

“F for Footy” shows two thuggish players in a rugby tackle. “What does the body language suggest about the game of football?” asks Sheahan-Bright, clearly no fan of what she calls our “national obsession”. As “D for Digger”, Greder shows a Digger in a flag-draped coffin with a mourning wife and child, “potent symbols of war and nationhood”, says Sheahan-Bright. (My own take is that when Greder happened to be born,  in 1942, his neutral Swiss homeland was waxing fat while Hitler plundered Europe). 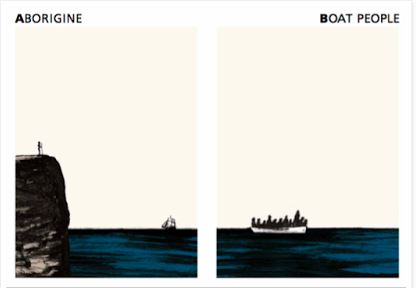 “X for Xmas” involves an Ocker in shorts and singlet, wearing plastic antlers, who is about to slaughter a turkey with a knife. Sheahan-Bright wants kids to write a story interpreting the image, but hints at no countervailing Christian narrative.

Stepping back a bit. and in all fairness, the 75-year-old Greder is an excellent stylist in charcoal, in the tradition of Germany’s Kaethe Kollwitz or our own Noel Counihan. He arrived in 1971 and taught tertiary-level art for 20 years.  He has authored and illustrated many books – at least one involving a grant application – and he’s won prestigious awards. An earlier Greder book, published in Italy, was about what he calls the suffering of the Palestinian people at the hands of the Israeli government. He further glooms, “I am a pessimist, agreeing with the Spanish author Perez Reverte that the best of the twenty-first century is that we won’t be around when it ends.

According to Sheahan-Bright, his alphabet book shows “how we as a culture might appear to those from other cultures”. This is a bit rich: Greder’s cultural qualifications as an immigrant date from 46 years ago.  He now lives in Lima, Peru, from which remote outpost he opines on our Australian repugnancy.

Dr Sheahan-Bright herself is an icon of the national and Queensland  writers’ community, a former deputy chair of the Australian Society of Authors, former member of the Australia Council Literature Board and in 2012 was recipient of the Children’s Book Council’s  Nan Chauncy Award for Outstanding Services to Children’s Literature. She’s vice-president (Australia) of the International Board on Books for Young People (IBBY) “which helps to build bridges to international understanding through children’s books.”  Australia to Z would build a somewhat rickety bridge, methinks.

Not content just with Armin Greder’s book, Sheahan-Bright recommends further alphabet-based agitprop to kids, namely “A is for Activism” and “ABC’s of Anarchy”. From those kids can learn that   “L is for Liberation Front”,  and “Z is for Zapatista”. My own thought: B is for Brainwashing.

[i] However, the cover of the Kindle version I am using merely shows one child straining to hoist the flag, with no perjorative element. I don’t know if the publisher has changed the cover or opener to tone things down.

The Road to Earthly Perdition

Hard-Wired for Indolence or Industry?