I Left the Liberals? No, the Party Left Me

Last Saturday, the State Council of the New South Wales Liberal Party upheld the decision of the State Executive to suspend former MP Ross Cameron for four and a half years. His crime? He spoke freely of newly installed NSW Premier Gladys Berejiklian’s opposition to the introduction of plebiscites that would give all local branch members their say. Cameron should wear this suspension as a badge of honour.

For the rest of us — or, rather, those who yet remain within the party — immediate resignation would be a rational and principled response. For reasons which largely escape me, there are still some good people who faithfully maintain their memberships. Cameron’s martyrdom for suggesting that things revert to the way they once were should be the final straw. What does the Liberal Party stand for, they might ask themselves, now that its bosses not merely spurn rank-and-file democracy but actively and brazenly scorn it?

Full disclosure: years ago, I was a member. Indeed, I was more than that. I served as a branch president, a delegate to federal and state electorate conferences and to the State Council. In that distant past, my local branch could boast of more than one hundred members — a sampling that could rightfully and truthfully be described as representing the diversity of views held by the Liberal supporters who accepted the how-to-votes we handed out on election days.

In those days party members had serious debates about policy. What we did not have, at least in my area, were factional heavies breathing down our necks. I was involved in the preselection contest for the seat in which I lived way back in 1973. It was an open contest with a large number of candidates. Before the day of the vote, a number of us on the preselection committee submitted questions to all the candidates. Their written replies were circulated, studied and weighed. On the great day when we voted, all the candidates gave speeches. We then held exhaustive ballots until only two candidates were left.

Truly, merit won out. Little did we know that we had chosen as our candidate in the seat of Bennelong a future Prime Minister, John Winston Howard. What a contrast with the fixes now imposed on local branches by the Michael Photios dominated state executive. 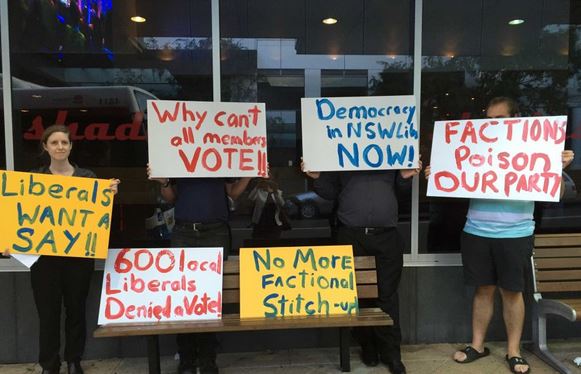 Were I still a paid-up Liberal, I would be ashamed to be a member of what is now the desiccated husk of a once-great party. I suspect that the Liberal Party will stagger to the next election like the walking dead. The next elections, both federal and state, will be cathartic events. And yet, if I look beyond the likely Labor victory and unsettling prospect of Bill Shorten, PM, there is the faintest light of hope in which to discern the future of the non-Labor side after the drubbings to come. Here I look across the Pacific for precedent and, ideally, for hope of revival.

Canada illustrates the fate of once great parties. For years, the Progressive Conservatives, an oxymoronic product of an essentially centre-left Canadian electorate, had functioned as the centre-right alternative to the centre-left Liberal Party. It produced prime ministers such as John Diefenbaker and later, during the 1980’s, Brian Mulroney. Kim Campbell, who succeeded Mulroney as leader of the party and prime minister, led the Progressive Conservatives to a total wipe-out  in the 1993 elections, winning precisely two seats in the Canadian House of Commons. The rival right-wing Reform Party, led by Preston Manning, emerged as the official opposition. Out of the Reform Party and elements of the old Progressive Conservatives, there emerged the new Conservative Party. Under the leadership of Stephen Harper, the Conservatives won the 2006 elections and governed with a fair degree of success for the next nine years.

As for Australia, we can be certain of only two things. One, Bill Shorten will win, but he will have no genuine mandate, the basis and core of his appeal being that he is not a Liberal. Whatever his majority in the House of Representatives, we may be sure that the ideologues in his cabinet will quickly alienate the majority of Australians. An unjustified moral superiority plus unlimited access to taxpayers’ money always brings that arrogant result.

The second thing of which we can be certain is that the non-Labor side will go through a painful period of reconstruction. Pauline Hanson’s One Nation and Cory Bernardi’s Australian Conservatives become the wild cards in the pack. This pair of outsiders overlap, particularly in terms of their perception of the cultural and civilisational challenges, but differ markedly on matters economic. For my money, if one were to place a premium on intellectual coherence, the bet would be on Cory Bernardi as the chief driver of the conservative reconstruction. On the other hand, Pauline Hanson gives voice to the often contradictory impulses of conservative working-class voters. We will see.

Best of all, the factional heavies in the Liberal Party will be history.

I very much doubt that Ross Cameron will have to wait four and a half years before he resumes a constructive role on the conservative side of politics.