Unlike Leak, It’s 18c That Deserves to Die

Trigger Warning: If you are so fragile as to be easily hurt or offended, this article is not for you.

Here’s an IQ test for you. Look at the Bill Leak cartoon below. The context is the role police officer Chris Hurley played in the death of Aboriginal man Cameron Doomadgee on Palm Island. I’m providing the context because, without it, Leak’s cartoon are subject to gross misinterpretation, drawn in response to news events of the day. Incidentally, just briefly, because of the poor handling of that case, my father, Colin Dillon, Australia’s first Aboriginal police officer (among many other accomplishments), resigned in protest from his position as a senior advisor on Indigenous Affairs with the Queensland government. But more about my father shortly.

Do you think Bill was suggesting in that cartoon that all white policemen are a danger to Aboriginal people? Was he generalising or stereotyping (the official term favoured by victim brigade)? Of course not.

Now consider what happened in response to his cartoon of August 4 last year, reproduced below.

The chronically offended accused Bill of stereotyping and racism, even though there were no such complaints about the previous one. Do stereotyping and racism only run one way? Those who only see a stereotype in the second cartoon, but not the first,score highly for a different type of IQ, their Inconsistency Quotient.

So why the shouts of “He’s stereotyping!” for that second cartoon? Why the inconsistency? Simply, because this one painted an inconvenient truth. 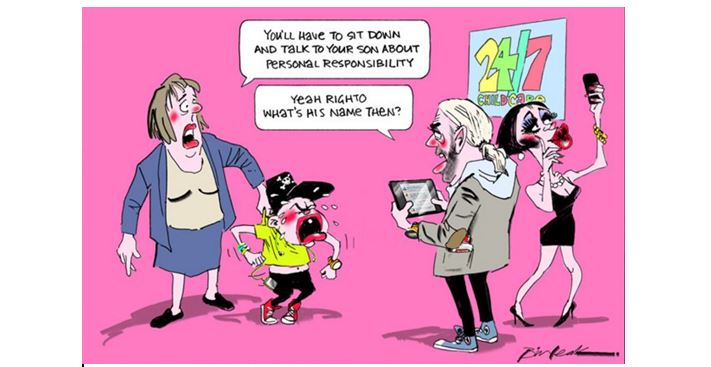 This cartoon mirrors the second one — note that the caption is identical — and those of us who recall recent history will grasp at a glance that Bill drew it in response to the criticism he copped for the previous one. Do you think he was suggesting that all white parents are neglectful of their children? Was he suggesting that all white kids are brats? Nobody accused Bill of generalising or stereotyping this time.

But there are inconsistencies, even with the criticisms about that 4 August cartoon. Why didn’t we hear, “He’s stereotyping employed Aboriginal men as policemen!”?

Now speaking of Aboriginal policemen, let’s return to my father. When I learnt on that morning of August 4 that Bill was being branded a racist, after picking myself up from the floor after a convulsion of laughter, I phoned my father to ask if he would  mind providing some encouragement to Bill, having already emailed Dad the cartoon in the wee hours of the morning. He wrote back that he had seen it and agreed with the cartoon’s message. After he contacted Bill to express his approval and upport, he sent me this email:

Contacted Bill and told him it was a brilliant cartoon and that he has my unequivocal support and backing in all that he does in producing cartoons that are merely trying to depict and illustrate to those in ivory castles, as well as the moron brigade, what the real state of things is in the Indigenous world, the things that they choose to ignore and sweep under the carpet.

I also told him to stay strong, not be deterred in any way from delivering his messages in the best way he knows how, through his incredible and artistic skills as a brilliant cartoonist. I advised him he could use my name anytime and wherever he felt it appropriate to let his detractors know that I fully support him in all he does.

Just recently I met a charming lady, Monica, who is a truck driver. She drives a road train from Sydney to Darwin every week and has done since 2001. She spends most of her time in remote Australia. She had this to say about Bill’s 4 August cartoon:

A good percentage of my workmates are Aboriginal. They’re the ones that are waiting for me to arrive in Darwin between 5 and 6am so they can start their day. Bill was never talking about them. He was talking about the kids I see every single week wandering the streets of Katherine at 2.30 on a Tuesday morning. I see kids as young as 8 walking alone at that time, just kicking a ball around. Their lives are over before they’ve even started. It breaks my heart. And for the record not one of my workmates were bothered by his cartoon.

But I think most people — those who are not “morons”, as Dad put it — know this already. It’s only the victim brigade that needed to give Bill’s genius a racist spin. I know from many conversations with Bill that the plight of neglected Aboriginal kids broke his heart as well. Of those who chose to be offended (yes, it is most definitely a choice), Monica had this to say:

They feel that having “change the date” tantrums and calling everyone racist is enough to fix the real problems facing Aboriginal people. No one is winning. I would love nothing more than to charter a 747 and take these inner city lefties to the places I go, at the times I’m there. They can hand out Invasion Day flyers and see if it helps these poor people.

There were many attacks on Bill and his alleged racism, both at the time of August 4 cartoon’s publication, and more recently after the unfortunate passing of my great mate. I have written about the pathetic attacks previously here in Quadrant and in The Australian. More recently, Chris Mitchell provided an excellent defence of Leak’s cartoon and his character.

Perhaps the worst criticism came from New Matilda, here author Amy McQuire commences with, “You’re not supposed to speak ill of the dead. But then you’re also not supposed to demonize a people on the basis of their race”. Of course, there is no evidence presented in her article that Leak was demonising Aboriginal people. Having started low, McQuire goes downhill  from there. Her mental gymnastics are really something:

“We saw that in his many cartoons branding Aboriginal men as violent and neglectful, and women as battered and bruised; all of them portrayed as if they did not love their children, or each other.”

Of course McQuire does not provide the context which inspired Bill — the Four Corners faux expose of an innocent Aboriginal boy being brutalised in a child-detention centre that would help her New Matilda readers better understand the cartoons — allowing, of course, that the sort of people who read and write for that website are either capable or willing to engage in rational thought and analysis. But even without the context crucial for understanding the drawings of a newspaper cartoonist, anyone interested in Aboriginal affairs knows of the shockingly high rates of violence and child abuse. Bill was not just pulling these images out of thin air.

McQuire’s rant should be read for the mindset it epitomises, the one that says of domestic violence and child abuse that it is much easier and far more convenient with “I’m offended!”, rather than “I’m ashamed this stuff goes on.” She also mentions Ms LaToya Rule, a member of Warriors of the Aboriginal Resistance (WAR), who staged a recent protest when the ABC’s Q&A touched down in Adelaide. She quotes Ms Rule as saying “Bill Leak will be remembered as a racist, sexist homophobe.” Reports on Ms Rule’s brother, Wayne Morrison, suggest why she perhaps prefers to focus on Bill Leak, rather than look in her own family’s backyard. Then comes this from McQuire:

You might coil back (sic) from Ms Rule’s comments, but remember that Aboriginal people had the very same reaction to his cartoons. While the media wants to paint Leak as a freedom of speech warrior, his work ironically contributed to the silencing of a people who are rarely afforded his large media platform.

If people do “coil back” from Ms Rule’s comments, it is likely because they have the honesty and intelligence (not much of the latter is needed, by the way) to recognise the depiction of Leak as a racist as a total and absolute nonsense. The idea that he had a hand in the silencing of anyone is an even greater absurdity.

My hope is that I don’t need to write another piece about the slanders heaped on my mate Bill. I loved him like a big brother and miss him every day, when I still feel like giving him a call but know his phone will never again be answered. No, grief isn’t the reason, it’s because Bill was nailed to the cross of 18C  to be tormented by his critics and the creatures who have the Human Rights Commission a taxpayer-funded cudgel to beat down anyone they — take that to mean the Left — does not like and needs to silence.

Section 18C is an obscenity. Unlike Bill, it needs to die, the sooner the better.

Anthony Dillon identifies as a part-Aboriginal Australian who is proud of both his Aboriginal and non-Aboriginal ancestries. Originally from Queensland, he now lives in Sydney and is a researcher at the Australian Catholic University. For more, visit www.anthonydillon.com.au

8 thoughts on “Unlike Leak, It’s 18c That Deserves to Die”

Journalism? Not At Their ABC