The new citizenship test for intending migrants will probably be window dressing. Clearly it is aimed at Muslims, which is entirely appropriate. They are the ones who have problems fitting in; wherever they go in the West. But asking people to commit to certain values and eschew others is close to worthless, unless combined with a lie-detector test. And I doubt the ABC would agree to that, if you get my meaning.

Maybe it’s time to reconsider something tangible like dress standards. My club has them and they work well. You always have the choice of staying out. It’s a question of how the matter is approached.

To be clear, within the confines of prevailing standards of decency, people should have the freedom to dress as they wish in purely public places. But the key phrase is ‘as they wish’. Our values are not consistent with any group of women being forced to wear what they would not freely choose to wear. The intolerant cannot be tolerated when it bears down on a vulnerable group of our fellow citizens.

In this case it is plain that the face of intolerance puts many women in unattractive clothing they would not freely choose to wear. We know this by applying self-reflection. We personally, would find it intolerable to dress from head to toe in black serge (or in any other colour) when walking on a hot Australian summer’s day. We also know this from looking at pictures of the way women chose to dress in Egypt, or in Afghanistan, or in Iran in earlier times when free of Islamic religious strictures. Empathy and common observation tells the tale. (editor: the picture below is of Cairo University students in 1978. Not a hijab to be seen.) 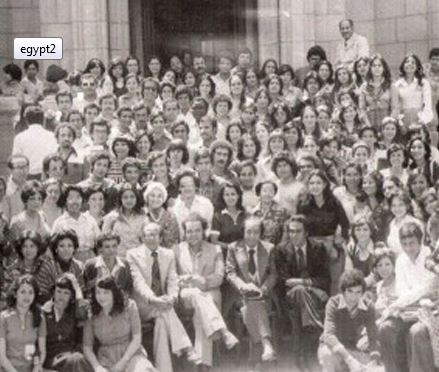 It is an affront to our value of gender equality to acquiesce to a particular group of women being forced, pressured or cajoled into wearing dowdy coveralls. We owe it to Muslim women in Australia to do something about it.

Dutton’s toughened migrant entry criteria could require would-be Muslim women migrants to agree to a dress code broadly consistent with modern Australian standards. Or, better and less intrusively, maybe it should be a case of broadcasting loudly and openly in advance: “Please don’t apply if you want to wear a burka because refusal often offends.”

If that is too high a price to pay to enter one of the best, if not the best, country in the world; so be it. Of course, this would get the usual suspects – orchestrated women in scarves, left-wingers, greenies – into the streets with protesting placards. But the counter would be to present the policy as pro-women.

I wonder how those Muslim women who yearn to be liberated feel when so-called feminists ratify their subjection at the hands of a patriarchal religious culture. Women who dress in skirts, high heels and have stylish hairdos should not reach the false and naive conclusion that there are millions upon millions of women out there who prefer to be draped head to toe in a shapeless bag. They are not aliens. (editor: Cairo University, 2004. Cover up, girls. The misogynists of “the most feminist religion” insist you dress as ordered.) 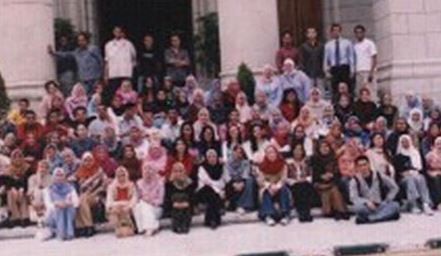 Taking away a right is always contentious. But in this case, if it were possible to take away one right from Muslim migrant women — to dress in a specific way in specific places — it would serve to give them and their daughters, and their daughters in turn, much greater freedom express themselves as they wish. It would give them greater opportunity to integrate into the broader Australian community. It would be a good bargain for them, as it would be for the broader Australian community.

It would also give a positive signal to Muslim women already resident in Australia who wish to break free of oppressive cultural or religious practices. It is not politically feasible to do as Ataturk did and ban the hijab in all educational institutions and in the public service. Imagine Buckley’s chance of getting that through and then divide it by a sextillion (or whatever huge number you prefer). However, creating a supportive environment which encourages as many Muslim women as possible into the mainstream is important in breaking down barriers.

Look at it all another way. Short of stopping Muslim immigration entirely, the best option is to ensure, so far as possible, that those who come in will fit in. Mothers, wives and daughters in burkas is a sure sign that ain’t gonna happen.

Rocky dawn of that Asian Century