When President Trump addressed CIA agents as one of his first acts he received generous ovations. I know. I listened to them. At one point he talked about his inaugural crowd size and (accompanied by engaged laughter) the dishonest press. His critics pounced. Wailing at his temerity at being off-point and self-indulgent in front of the Memorial Wall where stars honour the CIA fallen. They had a point, but deliberately overlooked the very positive result he achieved by reassuring the intelligence community of his support. His critics are in a permanent crouching mode.

His first week was active to say the least. He signed five Executive Orders and nine Memorandums, all in keeping with his campaign promises. And he found the time in his eighteen-hour working days to give at least three sit-down interviews, to meet with major manufacturers, with union leaders and with British PM Theresa May. But, into this overwhelmingly productive week, he also injected talk not only about the crowd size at his inauguration but also about the likelihood that millions of people voted illegally robbing him of the popular vote. His critics pounced again.

And many of his supporters, how do they respond? They say he would do better to avoid queering his own pitch. They want Trump without Trump; Father Christmas without soot on the carpet. They should understand that the soot is an integral part of the territory.

Apparently, Donald Trump doesn’t like the idea of coming second in anything. He likes to tell us, in various ways, that he was right or did an excellent job. To his critics, who include most of the media, the Democrats and many Republicans, he is a narcissistic braggart. Again, they have a point. But he is a lot of other things too. And his narcissism, in my view, is an armoured shield; the key to his unique ability to withstand the dark forces which have taken over American society — its media, schools, universities and public services — as they have all Western societies.

Have you noticed when someone in the public eye is labelled pejoratively that we are meant somehow to infer that the case is closed? That there is nothing more to be said; that he or she can be filed away under whatever is the pejorative label. It is ridiculous in the general case and in Trump’s case particularly ridiculous. Here we have a unique and talented human being

I have heard him described as a loving and supportive father and as a warm, caring and humorous friend. He is obviously a very good businessman, who can come back from the brink, and reality-TV-show entertainer extraordinaire. And, so far, judging by the quality of his appointments and his resolute action, he is showing distinct promise of being a formidable political leader. It is early days of course.

But, leave all this aside, he is impervious to criticism. The nervous Nellies in his own party must be quaking in their boots. He simply does what he says he will do and says what’s on his mind. This is beyond normal behaviour among the political class. Maybe Margaret Thatcher came closest but the dark forces are stronger now than then. Conservatives in power are used to bowing and scraping before the altar of political correctness and doing their best to hide themselves from the rapacious left-driven media. Trump simply takes the fight on in a way which before him was unimaginable. 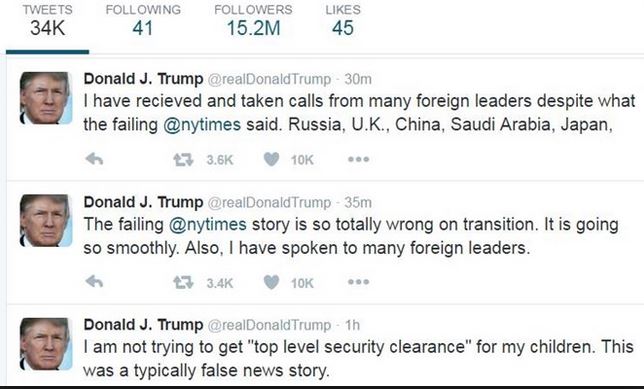 It is said that social media helps him to circumvent the MSM. It does, but that is a small part of the story. He stares them in the eye and tells them how dishonest they are and then doubles down on it. Who besides Donald Trump would do that? Of course, he is simply telling the truth. They are patently dishonest; pimping the truth for their national-self-loathing political agenda. Knowing this must arm him. But what really arms him, I think, is his narcissism. He has such self-regard that criticism rolls off his broad back.

People who support much of Trump’s policies but are troubled by his personality have to ask themselves a question. Who else can save America and provide a beacon of hope for the rest of the Western world? If not Trump, then who exactly? There is no one. There has only been one leader without flaws. Two thousand years on we have yet another flawed leader in a long line. But fortunately, as, say, with Winston Churchill, we may have hit another timely jackpot. He won’t save us from our sins but he might, just might, claw us back from the brink of cultural suicide.

Join the baying crowd and throw brickbats, or the Jeremiahs who will be disappointed if he doesn’t self-implode as they prophesy, or the pompous know-alls at the Murdoch press who seem oblivious to the mess we are in and the dire need for a disruptive force. Alternatively, give Trump the benefit of the doubt. If the hard-heads in the stock market can do it, maybe you can too.

The Lockdowns, Their Beneficiaries and Consequences