Long ago, when the bloom of youth was yet upon my cheeks and adventure in my heart, I carried aboard a jet bound for San Francisco a letter from Mum to be opened once the flight was airborne. It was all good advice … don’t drink too much … behave yourself … don’t drink too much … be polite to police officers … don’t drink too much. Sound counsel in every respect, the note concluded with an admonition that today seems both quaintly dated and sadly so, ‘Be a good ambassador for your country.’ Alas that former SMH opinion-page editrix Lisa Pryor (left) was  not similarly encouraged to avoid bringing Australia into disrepute. It might have stayed her hand from tapping out  the embarrassing missive that appears in the New York Times international edition.

Doctor Pryor’s topic (for a genuine, pill-prescribing doctor she has made of herself since leaving Fairfax) is Donald Trump’s presidential victory or, to be more accurate, the utter catastrophe of Hillary Clinton’s defeat. Times readers are alerted early to the newly minted medico’s fragile emotional condition, which has seen her dissolve in tears “many times, in the shower, in the car.” It would be presumptuous for one other than a physician to recommend an increased dose of the psyche-smoothing medications that she elsewhere notes have done her a world of good, but all that bawling really does suggest a suitable case for stepped-up treatment. Likewise a visit with her optometrist, as it seems she has quite some difficulty reading the charted results of survey questions. But more on that in a tick. First, the paragraph that says so much, not about how Americans “let us down” by rejecting a corruptocrat hypocrite in favour of a vulgarian tycoon, but about the author and the US publication whose front page is moist with its contributor’s latest weepings.

The election of Mr. Trump feels like a sudden plunge after a gradual decline. Already he is goading China, befriending President Vladimir V. Putin, disregarding climate change and refusing daily intelligence briefings because he’s “a smart person.” None of this, we fear, will end well for any of us.

What you mean “we”, white girl? Moving in the circles she does and re-tweeting with approval the asininities of Crikey!’s Bernard Keane and others, it might well be that  she has never met anyone other than the sort of people who still regard the SMH as a serious publication, a very small congregation indeed.  Were she to get out more it would come as a surprise to learn that some of her compatriots are actually quite pleased to see a bull at the door of the Washington china shop, as the American enterprise has been running in the red for far too long and could do with a top-to-bottom renovation and re-staffing. The paragraph above, representing as it does the cognitive dissonance of the New Establishment, makes the case.

“…a sudden plunge after a gradual decline”

So Obama’s eight years of profligate spending, of fecklessness and impotence, haven’t lifted anyone’s boat, yet US voters must be held to account for electing the man who noted as much and tapped his nation’s dyspepsia.

Much as Churchill goaded Germany, perhaps, by noting that it was intimidating its neighbours and laying claim to their territories?

As opposed to Mrs Clinton’s quite explicit promise that, were Moscow to be even suspected of cyber hacking, she might feel inclined to respond militarily. Now what was that about “goading” again?

Hypocrisy is the oil that keeps both the Left in general and mainstream media in particular running smooth, but even by that oleaginous standard this tossed-off critique is a gusher, appearing as it does in the Times. The ailing US publisher’s largest shareholder (17%) is a Mexican gentleman by name of Carlos Slim. Along with telecommunications and retailing interests, one of the mainsprings of Slim’s fortune is the cement business. What a pity that, when Pryor was featuring Tim Flannery’s hopeless prophecies on her SMH pages, he didn’t tell her that cement production is responsible for 5% of the greenhouse emissions that keep him awake at night. 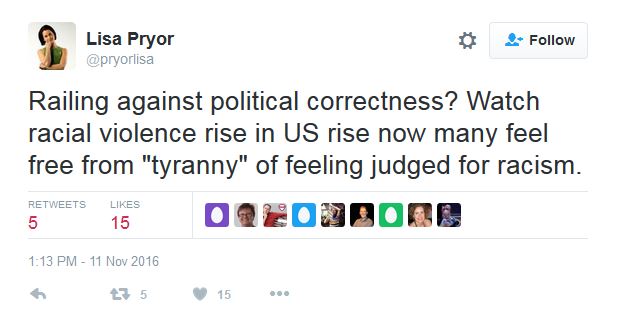 But wait, as they say in those late-night TV ads for miraculous kitchen doo-dads, there’s more! And just like those same ads, Dr Pryor’s column offers a two-for-one bonus. Not only do we see a luvvie appalled that common folk don’t think and vote the way their betters would wish, in Pryor’s quoting of a Lowy Institute survey we have a classic example of the selective eye. Here’s the mood she assures Times readers prevails in Australia:

Strictly speaking there is not much wrong with that paragraph. The  survey does indeed present all but one of those figures. There are, however, a number of other findings in Lowy’s latest charting of public attitudes which Dr Pryor would have been well advised to mention, for example:

Australians, or so one gathers (but not from Dr Pryor’s essay), are sympatico with Trump’s view that China could do with a little push-back. And then there is this:

Perhaps because she neglected to notice that section of the Lowy report, Pryor is able to suggest without blushing that “no longer can it be assumed that Australia will always pick the United States over China, if forced to choose.”

Assumed by who? Assumed by people who omit relevant details, apparently.

Now that Dr Pryor has traded her career at a dying newspaper for the company of patients whose prospects, one can only hope, are somewhat brighter, she is undoubtedly paying greater attention to the dosages she specifies in her prescriptions than to the numbers she opts to brandish in support of her punditry and salt-cheeked misery.

Asked “two years ago about whether the United States or China was the more important partner for our country,” she writes, “the United States led by 11 percentage points. This year there was a tie.” Well, yes, the two nations are neck-and-neck in Australians’ esteem, but the US has declined only five points, not eleven – from 48% to 43% — since the 2014 Lowy survey. As the Times is very good at running corrections —  it gets a lot of practice — someone should alert the newspaper’s public editor to that howler.

No doubt, the Times newsroom being inhabited by the trans-Pacific counterparts of the insular, arrogant wretches who wrecked Fairfax’s profits and reputation by ignoring and excluding the views and perspectives of all but those like themselves, Dr Pryor can expect the Grey Lady’s further invitations to overlook pertinent facts and get her numbers wrong.

How other Americans might react to her insights – Americans of the sort who voted for Trump —  well let’s just say it’s a pity my Mum didn’t share that long-ago advice about not making a goose of yourself on foreign shores.

A Plague of Authoritarian Fat-Headedness