The HRC Welshes on My Rights

A Welsh curse upon you, Bill Leak, cartoonist of The Australian, you drewgi siffilitig (in the Queen’s English, you syphilitic stink-dog). As a dark-skinned whitish person identifying as Welsh, I  lodged a race-hatred complaint to the Human Rights Commission on September 6 about your cartoon showing an obviously Welsh mother and father neglecting their child, thus offending, insulting, humiliating and intimidating me as a member of the Welsh race. [i]

Your  race-hate cartoon showed parents who have dumped their squalling toddler in 24/7 child care while they twiddle with their smartphones and ipads . The child-care staffer says the parents should talk to their son about personal responsibility, and the Welsh father replies, “Yeah, righto. What’s his name then?”

Bill Leak has form with all this stuff, especially with his earlier cartoon about an Aboriginal copper rebuking an Aboriginal lout about his errant son. The lout says, “Yeah, Righto, what’s his name then?” I hope Melissa Dinnison’s complaint to the HRC, solicited by Race Discrimination Commissioner Tim Soutphommasane, fares better than mine.

My shtick was that I had been grossly defamed as a white Welsh father by Leak’s imputation that I neglect my children. “I have been a model parent to my children,” I wrote to the HRC, not very truthfully. “I want right of reply in The Australian, an apology from Leak and compensation for offence, hurt, vilification and humiliation.” 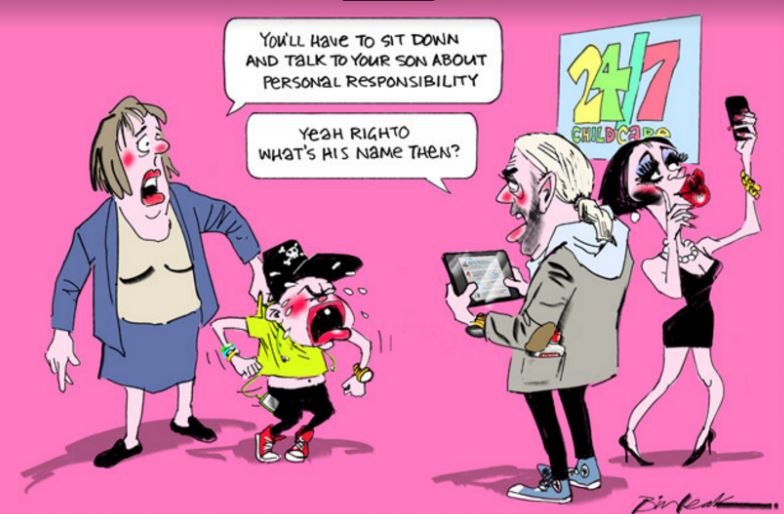 I have in mind a payment from Leak and The Australian similar to Cindy Prior’s sought-after $250,000 from those QUT students she kicked out of the Indigenes-only Oodgeroo computer room. I feel an urge to go on stress leave, but I retired 15 years ago.

Today I got a letter  back from the HRC saying they had not “formed a concluded view”. But’ as in Mordy Bromberg’s ruling in the Andrew Bolt case,  I could tell by  the letter’s tone, and reading between the lines, that  the HRC felt my complaint was dim gwerth rhech dafad (not worth a sheep’s fart) and as far as they were concerned, I could twll dy din (bugger off) unless I can make my complaint more persuasively.

The HRC letter runs to six single-spaced pages, and must have taken the HRC many hours of consultation and investigation, as befits a make-work organisation on a $24-million budget.

According to the HRC, I have until November 11 to embellish my complaint. On this significant Armistice Day,  President Gillian Triggs’ delegate will decide whether to terminate my hostilities. I can then  move to the federal courts for relief of my hurt Welsh feelings.

I must say that during these proceedings, I have got along fine by phone and email with  my opposite number in the HRC, Investigator/Conciliator Natalie Greenfield,  who has been helpful, courteous and prompt. Madam Triggs, please note this for Natalie’s next performance review.

She quoted legal precedents including a spat among Orthodox Jews and someone cranky with the Toowoomba Sports Ground. Her key precedent was a finding in McLeod v Power, Brown FM, that the term ‘white’ did not itself encompass a specific race or national or ethnic group, being too wide a term, and that “claims under s18C made on this basis may be ‘drawing a long bow’.”As a result my Welsh-based complaint was not persuasive.

Natalie: “While the people in the cartoon have fair skin, the race, national or ethnic origin of the people drawn in the cartoon is not at all clear.  The cartoon appears to depict parents who are at a long day care centre and seem to be more concerned with the electronic devices they are holding than interacting with their child who appears upset.” [He certainly does, he’s any parent’s nightmare].

But there wasn’t really a causal connection from the cartoon to my Welsh race “or that of other white people of Welsh national or ethnic origin.”

From this letter I also found out lots of curious things. For example, my one-time employer The West Australian got away with publishing a cartoon in 1997 showing the head of long-deceased Aboriginal warrior Yagan in a cardboard box “expressing a desire to go back to England”.

This talking-head exercise, as they say on TV, was a comment on an unseemly spat among Perth’s Nyungar about who of them deserved a taxpayer-funded trip to the Old Dart to reclaim Yagan’s head; who of them was an authentic Aborigine; and which leader had frivolously frightened a child who was skeptical about the UK trip by using the menace of a dreamtime serpent.

Getting back to the letter, Natalie then went into whether the cartoon involved offending, insulting etc. Actually, she said, the issue wasn’t whether I’d been personally offended, insulted etc. That was irrelevant. The objective issue was “rather, whether the acts complained of were reasonably likely to have that effect on a person of that race, color or national or ethnic origin”.

Natalie didn’t write the law, so don’t blame her for it. But what a stupid law to create such a rubbery yardstick about hypothetical group racial reaction to a cartoon. It’s just a lot of Cachu hwch, or pig’s poo.

[i] I also identify as Cornish, but Welsh will do for now.

Another Lit Board joke?