The Shoes of the Fisherperson

One of the more distressing things about the state of the world right now is the degree of absolute pettiness to which the social engineers and hijackers of language have been forced to descend. Their long march through the institutions has been so implacable, so thorough, that only tiny targets remain to be tortured on the rack of their politically correct whims and fancies. Take as an example the recent deep thoughts of the ABC’s resident “language researcher” Tiger Webb, who devotes more than 1000 taxpayer-funded words to an examination of the righteousness or otherwise of referring to those who catch fish as “fishermen”. Is it sexist, wonders Tiger?

What follows is an extended gush of po-mo analysis and nuancing. The essay will shed little light in and of itself on the acceptability of “fisherman” — the author thinks it is acceptable, just — but if you happen to be reading this post at work, consider that part of today’s earnings will be removed from your pay packet and consigned to fund Tiger’s further ruminations on matters of no real-world relevance and importance whatsoever.

Zeg, our cartoonist, has some further thoughts on the matter, being notably glad that “language analyst” was not a recognised occupation when the New Testament was being written. 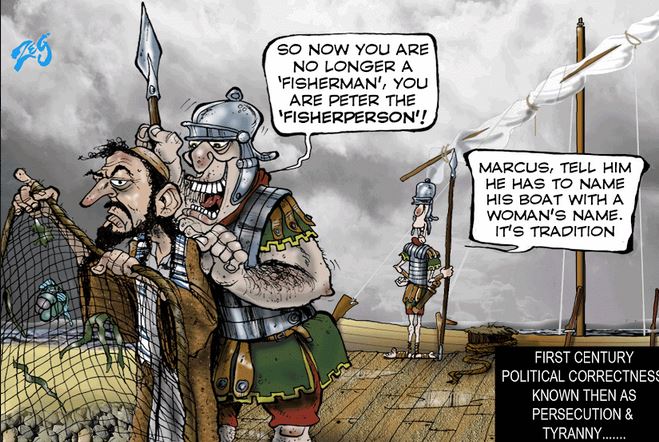 The Fable of All Our Lives

Close But No Cigar