Miles From Her Father

I am an atheist, a true thinker and speaker. I cannot stand or endure the priggery, caddery, snobbery, smuggery, hypocrisy, lies, flattery, compliments, praise, jealousy, envy, pretence, conventional speech and behaviour upon which society is based.— Bee Miles

For dominating fathers to clash with rebellious daughters is not unknown but, as a rule, few go to the extent of William “Billy” Miles, who ensured his daughter’s incarceration into the gulag of New South Wales asylums for four years. His daughter, Beatrice, never forgave him for keeping her there. After her release in 1927 she gained her revenge by becoming an Australian legend.

Beatrice Miles (she insisted on being called Bee) is twentieth-century Sydney’s most eccentric character, an achievement only matched by Arthur Stace – the Eternity Man. Her life is described in books, newspapers and magazine articles. Bruce Elder described her as Sydney’s iconic eccentric; Keith Dunstan called her “very nearly the first drop-out, the hippie”. To many, she was a quintessential larrikin – a designation of honour as this term is usually reserved for men. Newspapers claimed she was more widely known in pre-war Sydney than the Prime Minister. She became a cultural icon, with a novel, movie and musical based on her life and a painting submitted for the Archibald Prize.

The public idea of Bee’s personality was shaped, first, by her psychiatric admissions; then, her release on the grounds of being unfairly detained after a campaign by a Sydney newspaper; most remembered her outrageous behaviour. Everyone of a certain generation who lived in Sydney has a favourite Bee story – or heard it from their parents. She turned her life into a form of street theatre. She loved to challenge the authorities by abusing police, doctors and magistrates, making a spectacle of herself whenever possible. She would establish herself outside the Mitchell Library and quote reams of Shakespeare for a fee. She refused to pay for cinemas, buses, trains, trams or taxis. Woe betide any driver who refused to take her, as she was quite capable of destroying the vehicle and often did so. When arrested, she turned court proceedings into farce, giving as much as she got to the exasperated magistrates. She had 200 convictions against her: “Eighty I deserved, but 120 were unfair and malicious,” she said. Jail did not deter her as it provided a break from living in the rough.

An athletic, intelligent and free-spirited teenager from a prosperous St Ives family, Bee seemed destined for better things. She was accepted into medical studies at Sydney University in 1920 but changed to English literature. Then disaster struck. She fell victim to an attack of encephalitis lethargica, then raging at epidemic proportions. Her vision 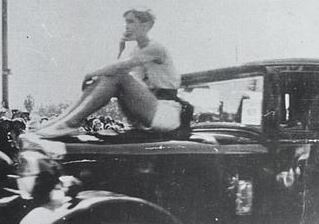 was blurred, she fell into a deep sleep and was fortunate to survive – up to 40% of victims died in the acute stage. But the chronic personality changes which resulted were to turn her life upside down. She was so hyperactive and disruptive that study became impossible. She would take to the streets on a men’s bicycle (in those days, a most radical thing) dressed in a ballroom gown (or shorts) with a wide brimmed hat while blowing a police whistle. She played the piano any time of the day or night and was unrestrained in expressing views on free love, which infuriated her father. A snapshot from this stage of her eccentric evolution captures a young, trim woman immodestly at ease upon the bonnet of a car at the Randwick races.

It was not long before the situation became intractable. In a move that devastated her, Miles had Bee forcibly admitted to the Gladesville Hospital for the Insane in 1923. Over the next four years she was shuttled between Gladesville, Kenmore and Callan Park hospitals. Grim and Dickensian institutions, they were overcrowded carceral hutches with no effective treatment, few doctors and mostly indifferent staff. Bee made several attempts to escape but was always traced and forced to return. She finally got out of hospital in 1927 when Smith’s Weekly published a front-page story campaigning for her release.

After this Miles gave up. Bee had a small allowance and, as far as he was concerned, it was up to the police to bring her in if she was disruptive. Aside from several brief admissions in the years to come, she was now free to live her own life.

Bee never forgave her father for what he had done and maintained the animosity for the rest of her days. She continued her public life, living in King’s Cross. The Cross was the only place in Sydney (if not Australia), where there was exceptional tolerance of extreme or eccentric behaviour, regardless whether it was political, creative, sexual, hedonistic or insane. Bee mixed with intellectuals, poets and artists who appreciated her radical beliefs, including sexual freedom, overcoming political and social oppression. These views had a certain appeal to libertarians, who regarded her as a Bohemian, rather than a psychiatric misfit; her insistence on free entry to movie houses was no doubt regarded as idiosyncratic (except to the communists). She was friendly with the communist Phyllis Ophel and the exhibitionist Dulcie Deamer, the ‘Queen of Bohemia’. 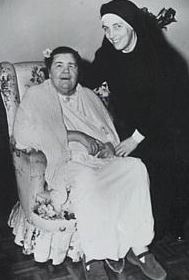 From the late 1930s, Bee had used up all accommodation options and from then on lived in the streets. By the 1960s, her health failing, she stayed with the Little Sisters of the Poor until her death in 1973.

Her behaviour notwithstanding, there is no denying the fierce intelligence behind Bee’s utterances. She was unique for her time: a proto-nationalist with ideas we now take for granted but were then highly unconventional. Strongly opposed to any imperial links and a great supporter of the Aborigines, when she was 12, she wore a ‘No Conscription’ badge to school during the World War I referendum. She was outraged to be marked down in an essay describing Gallipoli as a ‘strategical blunder’ rather than a ‘wonderful war effort’. She collected wildflowers for a herbarium. She was prone to claiming she left university because they didn’t teach enough Australian stuff. Defiantly atheist, she was strongly opposed to Catholicism – although she converted on her deathbed. Her blasé indifference to sexual deviance was well in advance of the mainstream.

Bee’s ideas were certainly radical but they came from her father, an intriguing (and often ignored) figure who played a role in Australian right-wing politics in the early decades of last century. His story cannot be separated from that of his daughter.

William “Billy” Miles came from a comfortable middle-class family on Sydney’s North Shore. His father was from Tahiti – but presumably of English origin – as was his mother. Taken to England by his parents when he was eleven, he witnessed the first-ever cricket test when the ‘Demon’ Spofforth demolished the complacent MCC batsmen. An accountant, Miles was successful in business, being a director of Sydney Meat Preserving, British General Electric and the fashionable mercers, Peapes Gentlemen’s Outfitters.

An energetic and ebullient character, described as a choleric and peppery,  he played cricket, rugby and participated in athletics. He was a state-level chess player, sang, played the piano and fancied himself as a thespian, being treasurer of the local Shakespeare Society. A serial punter (and loser), he was a regular at Randwick. Miles also became involved with the Rationalist Society, strongly opposed to conscription and Australia’s Imperial links. A “crabbed eccentric”, a biographer was to say, “with dangerous obsessions and money to spend, Miles represented an unstable element in Australian society”. He was not alone in these views. In a newly unified country, strong nationalistic views were not uncommon. These focussed on the threat to the white race by ‘Asiatics’ and elided with eugenics, the so-called scientific basis for preserving the blood stock.

Such beliefs were prevalent in scientific, medical and intellectual circles across the political spectrum, but Miles progressed to more extreme views, coming to a head after he retired in 1935. His anti-British views merged with anti-Semitic and pro-Nazi sentiments. To further this, he established The Publicist monthly to promote the Australia First Movement. Its aim was to ‘arouse in Australians a positive feeling, a distinctive Australian patriotism of a thoroughly realistic kind’. Miles and literary personality Percy ‘Inky’ Stephenson pushed the view that Australia had no part in any European conflict. Miles financed Stevenson’s book The Foundations of Culture in Australia (1936). The German counsel in Sydney fed the journal with pro-Nazi information and it printed out Hitler’s policy speeches. In one edition in 1938, Miles railed against the increase in bad teeth, insanity, Jewish and feminine influences, the decline in family life and decreasing parental control – the last topic highly apposite in view of his struggle with his daughter. 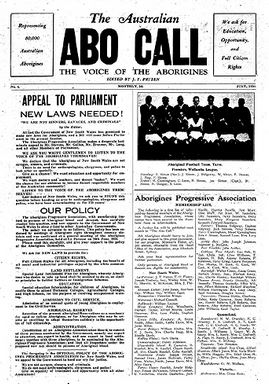 Miles’s right-wing views were shared by the Jindyworobak movement, a literary group including Rex Ingamells, Alister Kershaw, Adela Pankhurst Walsh, Xavier Herbert, Miles Franklin and Eleanor Dark. They had considerable sympathy for fascist countries like Italy and Germany, as well as Japan. Their support for Aboriginal causes — manifested in the Abo Call newspaper (left), arose from the misguided concept that Europeans and Aboriginals shared a common Indo-Aryan origin. However, his health began to fail. He developed severe angina and gangrene in the leg to which he responded in typical fashion, running a sweep on when he would die. His died in 1942, after which Stevenson was interned for most of the war and The Publicist ended its run with 16 little-read editions.

Miles’ ideas passed on to his daughter, despite her intense antagonism. While she did not express racist views, Australian nationalism retained a hold on her all her life. At her funeral service, Australian wildflowers were placed on her coffin and the band played ‘Waltzing Matilda’, ‘Tie me Kangaroo down Sport’ and ‘Advance Australia Fair’.

The ironies of history have turned on both daughter and father. In an entirely unintended way, Miles’ Australian nationalism, stripped of its racist, eugenic and fascist elements, has become mainstream fare; the odd, but still sincere, support for Aboriginal rights even more so. Bee’s views are today regarded as unremarkable by most Australians. Yet few know that she got these ideas from her father, whose ideology was vicious, if not hateful. And Bee herself does not get off entirely. In her last interview, with journalist James Ricketson, she stated that the intellect of the world was declining because the white race was degenerating, showing she still adhered to the eugenic and white supremacy ideals that Miles held so strongly.

Bee has gone into history as a Sydney legend, a street sensation who mostly amused those she encountered and promoted a message that was years ahead of its time. Yet there was an edge to it and few would have realised that its origin lay in a far more ominous ideology. In her legacy she is her father’s daughter, not the other way round; in the end, Billy had the last laugh.

Robert M Kaplan is a forensic psychiatrist and writer. He is researching the life of Bee Miles

7 thoughts on “Miles From Her Father”

Their Black Flag, Our White One