Memoirs of an Ink-Stained Wretch

Tony Thomas’s Quadrant screed on his efforts to publish a story in The West Australian in 1968 about Perth’s then-illegal homosexual community reminded me so much of my own time as a Perth reporter and editor in the same era. I wrote for The West and then for its rival, the Sunday Independent, in the 1960s and early 1970s.

On The West I did a feature, written on my own time, about whether or not capital punishment reduces the incidence of murder? It was written in 1964, while people (outside The West Australian) were asking themselves whether Eric Edgar Cooke should be hanged for his eight known murders – he also was responsible for 14 attempted murders that we know about. Understandably, Cooke was unpopular in Perth. He had been  shooting, strangling, stabbing, axeing, and committing countless other heinous crimes, including hit-runs and necrophilia, along with 250 or more burglaries.

My research included countries outside Australia, and my conclusion was that hanging did not reduce the murder figures.  No editor on The West would ever have asked a reporter to write stuff that might suggest Cooke should be allowed to remain alive. West editor, Griff Richards, was away and Bill Loh, the acting editor, came out of his office (Griff never did) and handed back my copy with the friendly advice that The West would not publish my handiwork. However, he sded that an anti-hanging paper just might.

Future WA Inc Premier, subsequent jailbird Brian Burke, who was then a cadet, sat at the desk behind me and heard the conversation.  He asked what was I going to do with the feature, to which I replied, 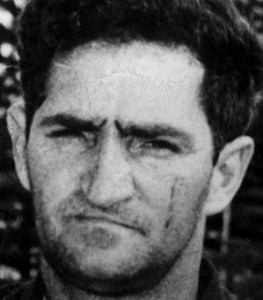 “Buggered if I know. This mob won’t use it.” Burke volunteered to get it published in the Labor campus newspaper at the University of WA and I said “Go for it!” A few weeks later he told me sheepishly that it had been published in the Labor paper but under his byline, not mine. I like to think my purloined words represented a small step in his rise to prominence in the Labor Party, which was stridently against capital punishment. In retrospect, of course, it also attests to the future premier’s light-fingered disregard for the property of others.

Not that it did much good as far as Eric Edgar Cooke (left) was concerned. On October 26, 1964, he became the WA hangman’s last job.

On another occasion I wrote piece about the possibility of legalising homosexuality. I mentioned that lesbianism was not illegal in WA because we had copied English legislation introduced during the reign of Queen Victoria, whose  PM is said to have baulked at the prospect of telling his monarch that such a thing as lesbianism even existed.  My story never saw the light of day.

Another event involved Tony Thomas’s good friend, Police Minister Jim Craig (whose fantasised “solution” for homosexuality was “to have their balls off”). I was acting editor of the rival Sunday Independent, established in 1969 to promote WA mining to Canberra and the world. Our presses also printed the UWA student campus paper, The Pelican, after first checking the stories for illegalities and libels. That week’s edition happened to be a terrific anti- censorship issue which,  among its other articles, featured a pictorial centrespread of planes dropping bombs on Vietnam, Agent Orange misting down, civilians being machine-gunned etc.  In the middle of the spread was a big picture of a naked man lying on top of a naked woman.  No naughty bits showed. The only words on the double-spread page were in the caption under the nude duo. The said, “This is the only picture on this page we are not allowed to publish.” Brilliant student stuff.

On another page was a review of The Other Victorians. , a book then banned in Australia.  It was by an American Professor of Literature, Stephen Marcus, who wrote of the hypocrisy of the Victorian era, in which people erected a façade of respectability when in fact they were just like us (albeit with something of a fetish for tight-laced corsetry).  For example, in the book an upper class man has his way with a poor girl on a London bridge at night and then asks the rhetorical question, “Shall a man not roger a girl for sixpence?” The word “fuck” was used several times in the review.

Half-way through the print run, Lloyd Marshall, who was Lang Hancock’s favourite mining writer, rang The Independent’s co-owner, Peter Wright, and ordered not only that the presses be stopped but also that any papers already distributed on the campus be recalled.  Foolishly, I asked him what he would do were I to refuse. “I would sack you, John,” was his reply.

So, in cowardly fashion, I did what I was told.

Meanwhile, Police Minister Jim Craig, that guardian of the public’s morals,  put the police onto me, and I was charged with publishing an indecent newspaper.  So was Kim Beazley Jr, who as the UWA Guild president, was jointly responsible.

My editor, former Sydney journo Pat Nilon, had returned from holiday, and we were both summoned to appear before Hancock and Wright in their West Perth office. We sat around a big table as they tried to persuade me to plead guilty, thus avoiding some nasty publicity.  I said I could not do that because the book was a serious attempt to expose the chicanery of the censorship system blah blah blah.

To his credit, Hancock agreed to provide a lawyer to defend me. It was Howard Smith QC, later a Supreme Court judge, who warned me I would be found guilty.

Meanwhile, with me waiting for a hearing, and Beazley having decided to have his case heard separately, then-Customs Minister Don Chipp, and thus in charge of censorship, removed the book from the banned list. I was to be charged in court with printing a review of a book anyone could read!  I could hardly wait to get into court.  I rang Howard Smith to tell him, but he had forgotten about the  case and I had to remind him. “You’re still guilty” he said. Of course he was right.

The prosecution didn’t have much to say in court but I had asked Smith to examine me about the importance of the book and I had a field day, explaining how Stephen Marcus had extended the work of Dickens, who never told us about “these other Victorians.”

The magistrate duly found me guilty, and I was fined $10.

A few days  later, I was removed from position of news editor and offered the job of political writer, which I refused and left the paper instead. However, I must admit I was a failure as news editor and had been trying to get someone else to take the job. I started my own suburban newspaper, The Belmont Times, operating out of a sort of shack, built it to a circulation of 40,000 and sold it. I retired in 1989 and am now an 84-year-old, strutting my silver-haired stuff in and around the south-west town of Dunsborough.

If anyone out there has a good word to say about the Perth media in the late 1960s, please let Quadrant Online know via the comments thread below.

When It’s Party vs. Principle

The Age owes me an apology