What a nice town my hometown of Perth was in 1968!  Optimism in the air as the Pilbara development got under way.  Pretty Swan River, friendly tolerant  folks. Classy intellectuals at the University of Western Australia. What I mean, actually, is that Perth was a nice place for heterosexuals. For homosexual males, not so benign.

Today, of course, we celebrate homosexuality (plus LGBTI etceteras) and from primary school onwards, the rainbow banner proudly waves. Using Perth 1968 as a case study, it’s amazing how social mores have changed in 50 years. Perth police style, 1968, was not to go hunting down homosexuals, but if someone complained to the Criminal Investigations Bureau (CIB) detectives had to follow-up and prosecute if evidence went that way.

By now you may be wondering how and why I was getting up close and personal with Perth’s homosexual set. You doubtless suppose that reporter Tony Thomas wrote a feature on the topic and my employer The West Australian published it. No, no such revelations ever surfaced in that conservative, dull newspaper. So the back-story is worth telling. The features editor of The West was an old stick-in-the-mud who only wanted stock-standard mainstream matter. But I liked writing odd stuff. These pieces, comprising a little pad of paragraphs (one paragraph per A5 triple-sandwich wad so that stories could be sent piecemeal to the “hot metal” compositors at their Linotype machines) would usually come back to me with the simple word “No” on the front of it, plus feature editor’s initials.

Two miles to the west, in the suburb of Crawley, was WA University, where I was doing Australian Literature part-time (that’s the young me at right, by the way, on the job with pen and notebook in hand).  The Arts faculty had a monthly journal, The Critic, which I discovered was happy to run, without fee, my rejected pieces from The West. (Given that  a 12-month subscription was only $1.75, The Critic’s non-payment for work was understandable). I was always a bit nervous when my pieces appeared in these samizdats, wondering if my paymasters at The West would view it as lese majeste. A typical piece rejected by The West and run by The Critic involved my research into liqueur chocolates on sale around town, and my discovery that nearly all of them were devoid of actual liqueur. I noted that serious eaters of liqueur chocolates knew how to get hold of the imported variety with real 2%-proof liqueur in them. This caught the attention of Fremantle’s Customs officials, who intended to enforce the existing ban on 2%-proof imported chocs. The ban was designed to protect innocent children from the ravages of chocolate-coated alcohol. Customs demanded that I disclose who was doing the importing. “Never!” I shouted. “I’d go to gaol first.” Anyway, that’s all off-topic, except that The West spiked my story and The  Critic ran it.

It was investigating homosexuality that got me into big trouble at The West. My feature was rejected with fury and sanctions. If I hadn’t slipped the piece to The Critic, an important  slice of Perth life, circa 1968, would have gone unrecorded. To that date, May of that year, I confidently reported there had been no surveys or public analyses whatsoever of the Perth homosexual community. A cone of silence enveloped the topic. The only mentions of homosexuality in The West were occasional Magistrate’s Court reports of convictions (as per the headline below from Perth’s Daily News.) In polite company and the press the topic was unspeakable. 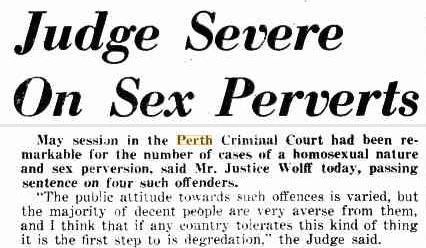 During my high school years (1953-57) at Perth Modern, there was one lad in my year, Geoff, who showed no fear of girls and had louche habits like removing a false tooth and menacing you with it.  Geoff wound up in The West as a library assistant, so we saw each other often. In 1962, when I was in hospital with TB, I saw an item in The West to the effect that police had raided a party at a suburban house, arrested numbers of men dressed as nuns, and secured sodomy-type convictions. Geoff was among those convicted, hence was named and shamed before the world. I think he was fined. I wondered about this small-town tragedy, and felt I should contact Geoff in a friendly way. But I had no idea how to express my condolences, and never called.

A few years later I acquired a girlfriend, Trish, with a very conventional family that included her older brother, Clive, a bachelor with a very close male friend, Ted, but the family tip-toed round the issue and assured each other that one day Clive would find Miss Right and settle down. Even though Clive and Ted behaved like a couple, Ted was always dubbed Clive’s “best friend”.

I felt motivated to lift the cone of silence by doing a solid feature on the topic. I suspected The West would disapprove, so I did all the work “off the books” between normal jobs. I thought that when I presented the editor with my finished article he would be impressed enough to overcome any reservations and give it the OK.

My first task was to locate and interview homosexuals (“gay” in those days still meant cheerful). Easier said than done. First, I was unworldly  and never involved in night-life, drinking circles and other places where people acquire sophisticated know-how. Second, I could hardly ask a question like, “Are you homosexual? If so, may I interview you?”  Might as well have asked, “Are you a burglar? Done any jobs lately?”

I wandered around in the evenings keeping an eye out for any two or more men behaving unnaturally with each other, and even accosted groups of men in pubs and asked if they knew any homosexuals for my interview fodder. No success: indeed, looking back, I suspect I was viewed as a shy homosexual trying to line up a rendezvous. Finally, someone told me about a night club involving cross-dressers and libidinous goings-on. I turned up and joined a table of rough-looking males, after explaining to them my reportorial mission. They were non-committal —  but made frequent side-trips to the toilet or adjacent lane and discoursed in a coded way about incomprehensible (to me) activities. I departed none-the-wiser.

Word got out around Newspaper House about my project. A few colleagues dropped by, ostensibly to chat but really to try to sniff out what my line was. For all they knew, I could be preparing to “out” them or otherwise draw attention to matters hitherto undisturbed by media scrutiny.

I then did the rounds of some Perth professionals who dealt with homosexuals. They mostly viewed homosexuality as a pathological condition.  Only one of them, WA’s Director of Mental Health, Dr Arch Ellis (right), had a view which has stood the test of time. He told me the law against homosexual acts was medieval and capable of making criminals out of one-third of the male population (i.e. who, according to Kinsey, had a same-sex experience at least once in their lives).  The main problem was not the condition but the draconian laws and their potential for blackmailers, he said. A government solicitor opined that Perth would not be ready for any legal change to homosexual laws for ten years to come. A law reform Committee had recently been appointed in Perth but it deliberately ignored the homosexual laws, saying those were for the state government to decide.

I got an interview with the then-Police Minister James Craig  (left) a Country Party stalwart, whose views would not be described today as enlightened. I wrote in the piece that Craig  had read some of the recent UK Wolfenden Report proposing UK reforms, “but (he) considered the British eagerness to legalise evils like drug-taking, prostitution and homosexuality was largely responsible for the state of morals in Britain today.”  The danger with legalizing homosexuality was that inverts would prey on youths, he said. I wrote, “Basically, he considered homosexuality unnatural. This was on personal grounds, not religious ones. Homosexuals were perverts, he said, and he had no intention of legalizing their behavior.”

My punchline went:  “One cabinet minister said the government had an open mind on the laws. Another said bluntly: ‘I’d have their [testicles] out!’”

Feeling pleased with my draft feature, I dropped it in my feature editor’s in-tray. Next morning, I was summoned to the presence of the editor himself, Griff Richards, who inspected me as if I were a blowfly on his blotter: “We are a family paper and this – (smacking my wad of copy against his desk) – is not what our readers want to read over the breakfast table!” He followed up with some strictures to the chief of staff,  Viv Goldsmith,  to keep a closer eye on me, to keep me productively occupied and to ensure that no repeat offences of this nature occurred.

I certainly took a risk handing my manuscript to The Critic for publication. Luckily no-one in Newspaper House was a Critic reader.

Perth no longer gaols and whips homosexuals, I’m glad to say. Attitudes have changed in the past 50 years, but I rather wonder what Perth social norms will be 50 years hence.

Tony Thomas blogs at No B-S Here, I Hope

8 thoughts on “The Bad Old Days for Gays”