Butterer of the Royal Waffle

Niki Savva is still there, writing for The Australian.  Having spent interminable month after interminable month putting the knife into every single thing former Prime Minister Abbott did or said – well beyond the point of obsession or what one might have thought the paper’s then-editor might tolerate – all came good when Mr. Turnbull defenestrated Mr. Abbott.  (Things also came good for her husband, though readers had to work that out for themselves.)  With that out of the way, the big question for Ms. Savva became ‘What to write?’  ‘What to write?’  ‘What to write?’

For a little while she could keep attacking Abbott, even though he had by then been politically assassinated.  When you have long depicted Abbott as the root of all Liberal malevolence and misfortune, it can be a hard habit to break — like a huge container ship, very difficult to stop and turn elsewhere.  But eventually even Niki (as close friends probably call her) moved on to greener pastures (and there is no doubt at all that her preferred Turnbull leans considerably more to the Greens than does her bogeyman, Abbott).

‘What new focus for me?’, it is easy to imagine Niki wondering.  ‘I know! I’ll be the world’s biggest cheerleader for Mr. Turnbull.’  Now that’s no easy aspiration, given the current crop of opinion writers on The Australian.  Try to think of one right-of-centre columnist who preferred Abbott to Turnbull.  Not Niki, that’s pretty clear.  Not Peter van Onselen, if we count him as right-of-centre, and I will return to PVO below.  Not Janet Albrechtsen.  I don’t know if Paul Kelly is now right-of-centre, he wasn’t in the past — but if he is, he’s not a Turnbull critic and that’s for sure.   Greg Sheridan comes to mind as a regular columnist who was in the Abbott camp, though he’s now perfectly happy with Turnbull.  Critics of Big Malcolm, well, there’s the infrequently appearing Maurice Newman.  I suspect Judith Sloan is too, though you have to infer as much.  And that’s it as far as I can tell.  All the left-of-centre columnists, the Graham Richardsons et.al., of course derided and despised Big Tony.

Nothing wrong with any of that, of course.  A newspaper can take any line it wants.  If Turnbull’s right-on! republicanism, ‘hopey-changey’, inner-city conservative-lite vibe is more in keeping with what the editor and owner want then that’s what they’ll largely plug.  They can do as they please.  It’s their money on the line, unlike the ABC which sucks an annual billion-plus dollars plus from Australian taxpayers to deliver wall-to-wall lefty propaganda, while still casting about pretending to be looking to hire a single, solitary conservative on any of their main TV current affairs offerings.  Say what you will about The Australian, no one is forced to buy it.  And all of the above notwithstanding, it’s still the best daily paper in this country, and by a long, long way.

Now where was I?  Oh yes,  Niki’s new persona as Turnbull cheerleader.  ‘Isn’t he lovely!’ she’ll murmur.  ‘Isn’t he wonderful!’, she’ll coo.  ‘Isn’t he just the smartest man on the planet!’, she’ll intone.   If her idol can’t get the Senate on board for some reform or other, well then it must be that the problem is with the Senate, not the PM – pace her earlier line of thinking when it came to Mr. Abbott.  If the new PM looks indecisive?  Not Malcolm’s fault.  If he’s losing too many ministers?  Ditto.  If there’s no action on fixing the economy, not even talking up the need for spending cuts from what Niki takes to be the world’s greatest communicator?  Well, you can hardly expect a man of Malcolm’s eminence to rush into anything, surely.  Give it a few years, dear readers, a decade tops, and he’ll get on top of that tricky deficit. Ms. Savva is sure of it.  And if Malcolm happens to lean too far left, well, that’s not really an issue with Niki now is it.

My prediction on this one is that pretty soon we’ll be longing for  the return of Niki the Knife and her non-stop Abbott bashing.  Anything is preferable to the gushing schoolgirl with the king-size crush

on Turnbull and all that lovey-dovey stuff.

And that brings me to Peter van Onselen.  The man bends over backwards to get in as many snide and cheap shots at Mr. Abbott as he possibly can (see the start of his February 13 article).  In a recent piece, while trying to outdo Ms. Savva in his praise for Turnbull, PVO in an aside talked about lousy former prime ministers, into which camp he put Rudd and Abbott, and ‘possibly Gillard’.  The implication is clear: PVO thinks Gillard was a better PM than Abbott.  And no doubt he does think that, though as far as I know he hasn’t the courage to state it explicitly.  Remember, PVO is the man who went weak at the knees when Gillard got the PM job.  PVO is the man who, on TV, embarrassingly called the 2010 election for Gillard about a micro-second after the returns started coming in.  PVO is the man who never wanted to stop the boats – still doesn’t as far as I know, the fiasco in Europe notwithstanding.

Former PM Abbott was many things – but being an exponent of hard right (or even a little bit right wing) policies was most definitely not one of them – but his handling of the boats guarantees him a spot on the Best PMs list miles higher than the hapless Gillard.  I say that as an ardent critic of Mr. Abbott for backing down on repeal of Section 18c and his bizarre desire to spend money on a paid parental leave scheme when, at the same time, he was (rightly) telling us we’re broke and getting broker by the second. 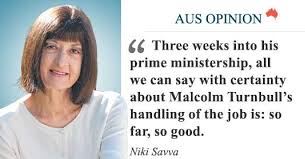 But I also saw that Abbott did some great things; that he faced intractable and visceral dislike from the ABC (and Savva and PVO and, well, the list is interminable amongst the chattering inner-city class) and from a one-sided Human Rights Commission. Most important of all, on no single front that matters to a small-government, Hobbesian conservative has or would Malcolm do better than Tony.  Not one.

Put differently, the least bad choice between the two was Abbott and by a country mile.  Fifty-four Coalition MPs disagreed and sold the better man down a river whose current moving leftwards.  They cashiered a victorious, first-term Liberal Prime Minister more than a year out from an election because their party was scoring only 47% in the polls.  That done, every single move Turnbull has made since taking the reins has been to the left  (no doubt something PVO welcomes).  Think about it:  Bjorn Lomborg stabbed in the back.  Gillian Triggs rehabilitated.  All pressure off the disgracefully biased ABC (gratitude for the national broadcaster’s stellar work in making Malcolm’s rise quite possibly a factor).  All pressure off the renewables rent-seekers.  A bigger, fatter pay offer to civil servants (in a time of budget blow-outs recall).  Free speech, something I care about deeply, worse off under the new regime – yes, Abbott was terrible on this front, but Turnbull is patently worse.

Oh, and after five months in office there’s still not a single proposed spending cut that anyone can come up with and is prepared to endorse.  Abbott and Hockey produced proposed cuts.  Heck, they tried to enact them! They may not have argued for them well enough, but they did see that cuts were needed.  Meanwhile, nothing, nada, zero from Niki’s and PVO’s darling Malcolm.  Yes, yes, yes, Turnbull can put ‘everything on the table’ as far as mooted 50% GST hikes are concerned, or raids on people’s superannuation, or just about any revenue raising schemes (ie., more taxes) you can dream up.  But nothing is yet ‘on the table’ as far as cutting spending.  They’ve even taken to using the language of ‘spending restraint’, which is not even close to the same thing as ‘spending cuts’ – suggesting, as it does, that they may try to limit, a bit, any of the new spending ‘investments’ that pop relentlessly into their heads.

Maybe some of you have seen the clip of the comedian who plays Dr. Rudi and explains that the best way to lose weight is ‘to eat less’.  Turnbull and Treasurer Morrison would be well advised to take a variant of that advice and just ‘spend less’.  After all, the best way to cut spending, when you get right down to it, is ‘to spend less’.

Meantime I look forward to Niki and PVO explaining how Malcolm can walk on water, artfully woo and charm all those Senate independents and get all the bills he wants passed.  He’ll then balance the budget, save the world’s climate, and he won’t need a single, solitary conservative’s vote.  (You heard it here first, although Niki is almost certainly working on a column that says exactly the same thing.)

A Good Conservative Will Do That