The Bromberging of Free Speech

I’m not inclined to masochism, but drawn by the lure of Mark Steyn’s appearance on the panel, I ventured into Q&A waters on Monday night, a folly I have spurned for some time. Strangely, even the juxtaposition of Steyn and Sarah ‘Accidents Happen’ Hanson-Young failed to ignite much controversy and the whole thing was a bit of a predictable bore.

What did strike me, though, was the panel’s general ignorance (with the single exception of Steyn), not to mention that of the audience, of what ‘free speech’ actually means.  For example, some commenters agreed that free speech is a bona fide right, but only so long as ‘facts are right’.  This appears to have been a dig at commentators such as Alan Jones, with Hanson-Young further asserting that Andrew Bolt lost his infamous racial discrimination case ‘not because of his opinion but because his facts were wrong’. That grossly misleading assessment, which makes much of trivial errors, says more of the Senator’s grasp of facts than it does of Bolt’s argument that the Aboriginal Industry feathers the nest of some while ignoring the plight of many more (editor’s note: one of those errors was the columnist’s assertion that Larissa Behrendt’s father was German; in fact, it was her grandfather who married a woman of Aboriginal lineage, a union that made the fountainhead of her genetic Aboriginality one generation further removed than even Bolt asserted.) 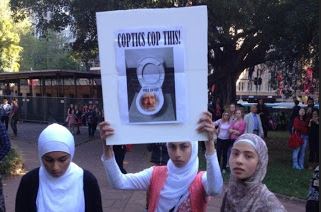 No legal woes for these young Sydney Muslims, the object of whose enmity is Coptic Christians

Much of the discussion centred on Section 18C of the Racial Discrimination Act, the repeal of which was a promise by a Coalition that repudiated that pledge upon being elected. The problematic part of the legislation seeks to restrict language that “gives offence”.  It is this subjective standard that conservatives want struck out — and that was, essentially, what the Bolt case was all about. When the Coalition came to office and the debate, such as it was, about the repeal or amendment of 18C began, the most pathetic contribution came from David Weisbrot, chair of the Australian Press Council. Wreathed in sincerity, it is also unintentionally instructive

I wish the Andrew Bolt case hadn’t set the parameters for that debate. Because everybody thinks about Section 18C now in terms of Andrew Bolt, which first of all makes many people uncomfortable.

If the chairman of the Press Council can’t understand the concept of free speech, what hope is there that Hanson-Young and so many others of an authoritarian streak will ever grasp the notion that it is a liberty which should be available to all, the speaker’s identity, politics and topic having no bearing whatsoever on the right to speak in hope of being heard?  Is Bolt’s right to free speech less than anyone else? Let’s look at the Bolt case. Judge Mordechai Bromberg, a onetime Labor candidate for pre-selection, said:

I am satisfied that fair-skinned Aboriginal people (or some of them) were likely, in all the circumstances, to have been offended, insulted, humiliated or intimidated by the imputations conveyed by the newspaper articles …

Bromberg also said that Bolt was a sloppy journalist who had penned the pieces in a bald attempt to be “destructive of racial tolerance”. The provocative “manner” in which Bolt put pen to paper was crucial to Bromberg’s reasoning:

The reasons for that conclusion have to do with the manner in which the articles were written, including that they contained errors of fact, distortions of the truth and inflammatory and provocative language.

So, right up, we see that the Senator for the Bottom of the Garden got it 100% wrong.  The ‘wrong on facts’ finding was peripheral to the main issue, which was giving offence — “the manner in which the articles were written”, to use Bromberg’s very own words.  The Senator’s statement was, to put it mildly, incorrect. Yet no one picked her up on it — not host Tony Jones, who could (make that should, given that he is one of the nation’s highest-paid and most prominent media figures). More disappointing was the response of Liberal minister Steve Ciobo, whose less-than-muscular contribution to the free-speech debate came with the observation that, on the whole, he would rather have more freedom of speech than less.  What a champion!

The article in question is still on the web, albeit with a court-ordered disclaimer, In essence, what Bolt was saying was that certain people of mixed-race (for want of a better term) derive significant personal benefit from publicly funded programs and sinecures. Bolt argued that, where assistance and preference is given, such advantage must be on the basis of current need, rather than the identity of a grandparent or even more remote ancestors. This seems to me to be an eminently justifiable point to raise, relating directly as it does to the efficacious use of taxpayer funds. Worth noting is that the aggrieved chose not to pursue a defamation action, which would alleged damage to their reputations. Instead, they opted for the far more nebulous and inevitably subjective route of “offence”.

Should Bolt’s substantive point be silenced because the way in which he made it ‘caused offence’?   I’m not saying that the plaintiffs committed any wrongdoing, but are they immune from criticism because their Indigenous sensitivities were fuffled? More than that, is it wrong to make mention of positions and advancements reserved for those of Indigenous heritage?

The Act identifies one of the exemptions to 18C as “a fair comment on any event or matter of public interest if the comment is an expression of a genuine belief held by the person making the comment.”  Surely, the only point upon which Bolt’s case could fail under this exemption would be if the comment were unfair.  That is a very vague standard upon which to limit public discourse — a standard not tested by an appeal which, to its shame, Bolt’s employer di not launch.

If free speech is of any value, surely, it is most valuable when it concerns controversial issues with the potential to make people feel “uncomfortable”. This is well beyond, say, deliberately and culpably inciting a mob to inflict violence on others, the former extent to which free speech was restricted.

One other minor note.  Tony Jones took the opportunity (see the transcript below), yet again, to indirectly defend the Q&A appearance of convicted criminal Zaky Mallah by referring to his right to free speech — this despite ABC management having conceded it was an error of judgement to transport the Muslim firebrand from and to Parramatta, assign ABC producers to sharpen and polish his words, then bushwhack a government minister with a closeup of what was much more a statement than a question.  Just for Tony’s benefit, Mallah is entitled to any vile view he fancies, but the ABC is not obliged to provide a pulpit for such excrescence.

All of which brings me to some ancient history.  Does anyone remember what happened on Australia Day, 2012, at and around The Lobby restaurant in Canberra?  Below is the text of a letter I sent almost exactly four years ago to AFP Commissioner Tony Negus on Feb 16, 2012:

On Australia Day 2012, I heard a news reporter claim on TV that the Opposition Leader, Tony Abbott, had said that ’the Aboriginal tent embassy should be torn down’.  My immediate reaction was to think ‘how could he be so stupid as to say something so inflammatory to Aboriginal people on Australia Day.’ I later discovered that he had said no such thing.

Had he, in fact, said the words attributed to him, a reasonable argument could have been made that he had breached the Racial Discrimination Act in that he had made a statement, in public, that was likely to give offence to Aboriginal people and that the statement was directed at the tent embassy occupiers because of their race.  I accept that the third element may be arguable.

However, I have no doubt that had he said those words, numerous public figures would have called vociferously for him to be prosecuted.

We now know that the words were, in fact, said and did give offence to the extent that a mini riot ensued in which the safety of both Julia Gillard and Tony Abbott were judged, by the PM’s security detail, to be at risk.  The only problem is that they were uttered by someone else – by union official Kim Sattler briefing Aboriginal activist Barbara Shaw.  Sattler’s words to Shaw were taped at the time and aired on the ABC 7.30 Report on Tuesday 14th February.

It would seem, therefore, that, prima facie, a breach of the Act did occur and that it was Kim Sattler who committed it.

If one believes the PM’s claim that her staffer Tony Hodges accurately passed on to Kim Sattler the sense of what Tony Abbott had actually said, then Ms Sattler has clearly misrepresented those comments, the direct consequence of which was the mini riot.  Ms Sattler’s actions should be the subject of a police investigation.  Sattler may claim that she innocently mis-interpreted what Mr Hodges had told her but she should, at least, be made to convince the police of that.

If, on the other hand, Ms Sattler maintains that she did not misrepresent what Tony Hodges told her, then he should also be investigated.

These events may also involve offences under other legislation relating to incitement.  As a concerned citizen, I urge you to instigate an official investigation into these events.

I followed up this letter six times and received a total of three responses from the AFP, all of which told me no more than that the matter was under investigation and they could not comment, or that the investigations was complete and no charges would be laid.

My response to the last letter was:

On Australia Day 2012, the Opposition Leader, Tony Abbott, answered a journalist’s question regarding the future of the Aboriginal tent embassy.  He gave a measured and diplomatic reply which stated, inter alia, that he thought it was ‘time to move on from that’.

Subsequently Ms Kim Sattler, acting on information received from Mr Tony Hodges of the PM’s office, told Aboriginal protestors that Tony Abbott had said that the tent embassy ‘should be torn down’.  What ensued could only be described as a mini race riot, during which the PM’s security detail decided that the safety of the PM and Opposition Leader was at risk and accordingly evacuated them from the Lobby restaurant.

This incident made front-page news around the world, damaging the authority of the PM and the reputation of Australia.

It is my contention that Ms Sattler incited racial hatred in that she made a statement, in public and on a race-based issue, which gave enough offence to the tent embassy protestors that they stormed the restauran,  putting the safety of the Prime Minister and the Opposition Leader at risk.

I understand the AFP investigation has concluded and that no offence was identified.

I am anxious to get a full understanding of the reasoning that led to this conclusion.

Specifically, I would like to know if my proposition above was canvassed as part of the investigation and, if so, on what grounds did it fail?

If it was not considered, why not?

Was Mr Hodges interviewed by the AFP?

If so, did he confirm that he had passed on Mr Abbott’s comments to Ms Sattler verbatim?

If he did, what was Ms Sattler’s reason for translating them into more inflammatory language?

Has Ms Sattler received preferential treatment because she is a union official and part Aboriginal?

I never did get a reply. Alleged violations of free speech, or so it strikes me, are a one-way street.

Taken for fools by bumper-sticker brainiacs