Their ABC Wants You. Apply Today!

Quick, if you yearn for the ABC to do a better job, you have only until tomorrow to offer a helping hand! That is when applications close to fill the four vacant seats on the national broadcaster’s Advisory Council – and going by the current members, a bit of genuine diversity would not go astray.

Never heard of the Council? No surprise there.

Although established in 1983, its achievements have been of the rubber-stamp variety, despite a brief that mandates a duty to

write up Community Notes reflecting discussions with the public and Program Notes which summarise your views of the ABC programs, services and any other aspect of ABC product in preparation for meeting discussions.

That would seem an invitation to be frank and forthright in praising the things the ABC does well, and criticise what it does badly or should not be doing at all. Yet if we are go by the Advisory Council’s semi-regular bulletins to the ABC Board, no member has ever seen or heard a single programme that raised the slightest cause for concern, nor was ever troubled by anything else about the way the broadcaster goes about its business.

The perception of widespread nepotism? Nope, not a word about the remarkable number of spouses and partners drawing nice salaries on the same ABC bank account. Virginia Trioli’s hubby, Russell Skelton, a scold of conservatives, fled the dying Age for a secure new gig atop the ABC’s Fact Check unit, but his arrival piqued the Council’s interest not at all. Even a person of minimal curiosity might have wondered about the selection process: How many applicants? Who did the choosing? Shouldn’t all hiring be subject to independent review by outside auditors? You know, those sorts of questions. But no, the Council expressed not the slightest interest in this or any other big-ticket additions to the ABC payroll.

How are production contracts awarded and to what end? No Council interest there either, which is very curious in the case of The Chaser. Produced by a private company for a large and undisclosed sum, the show outraged propriety in 2009 by making infamous fun of children suffering from cancer. Even ABC Managing Director Mark Scott felt obliged to “unreservedly apologise”, promising that the broadcaster would be pulling up its socks, observing its own editorial guidelines and, in the words of the man who ordained himself “editor-in-chief”, pondering “those processes around comedy that’s edgy and satirical.”

Four years later, with no interruption of payments to the show’s production company, Chaser spinoff The Hamster Wheel depicted conservative columnist and ABC critic Chris Kenny having sex with a dog. The cancer-kids review apparently had come to nought, as Scott was obliged (eventually) to issue one more apology for that further outrage. Not that The Chaser crew were out of pocket. Those cheques and contracts kept right on coming even as the ABC paid a pretty penny for lawyers to argue in court that it had done nothing wrong and that Kenny — a grumpy sort, presumably, who cannot take a joke – had no right to redress. Eventually, the broadcaster did apologise, but that drawn-out defence of the indefensible also passed without Council comment.

This came as no surprise. In 2009, when The Chaser was giving dying children a bit of that “edgy and satirical” schtick,  its interest in comedy (and has-beens) was limited to praise for Clark and Dawe:

The ABC Advisory Council commends John Clark and Brian Dawe for their astute humour, effective through its simplicity, in providing a light juxtaposition to the serious intent of the 7.30 Report each week.

The Advisory Council commends the ABC for its increased coverage of the Australian arts scene in all its forms. The Council feels that every State in Australia is well represented. Innovative television and online programs such as Artscape, Sunday Arts, Painting Australia and Artpost support emerging and alternative Australian arts.

As an indication of the Council’s worth, the above endorsement is instructive.  Two years later, the ABC scrapped in-house arts coverage, contracting the brief to outside production houses.

Quadrant Online readers who fancy filling those Council vacancies and contributing to its deliberations will find the body’s collected and collective enthusiasm for everything the ABC does most instructive. Its “Recommendations and Commendations” through the years are assembled here – although not a trace of activity can be found for the current year. This should be taken, perhaps, as a further indication of the seriousness with which the Council’s views are received in Scott’s office and elsewhere. 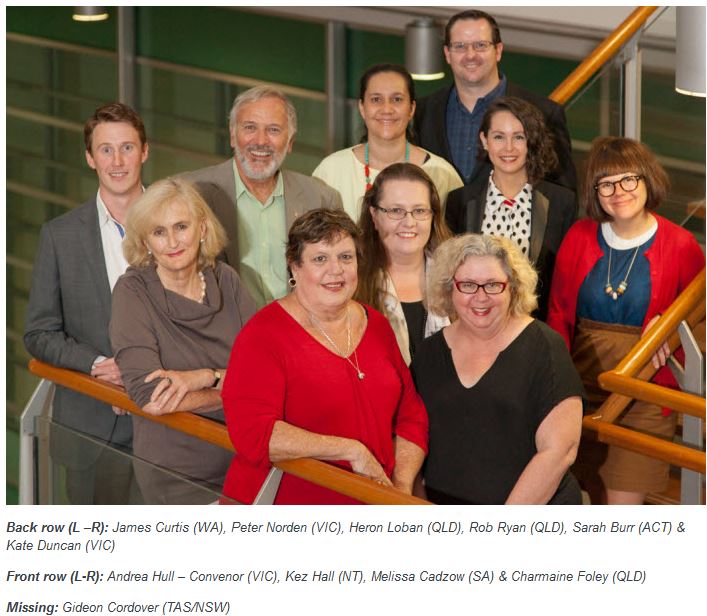 The limited breadth and diversity of the Council’s current membership might explain why it is so easy to ignore. When it speaks, it is in the monotone of those whose careers seem to have been cut from remarkably similar cloth. The current Council, pictured above, is astonishingly heavy with those who concern themselves with matters Indigenous. Of the 12 members, fully half are connected in one way or another with the promotion of Aboriginal concerns. Tertiary institutions are also heavily represented, as is the compassion-industrial complex.

All current members and their biographies can be found here, on a webpage that raises an interesting question: Where are the panel beaters and plumbers, the secretaries and salespeople, those for whom the focus of life and career is neither the university common room nor offices dedicated to pursuing grants and promoting social justice? Such people also watch and listen to the ABC, yet members of the productive economy, with one or two qualified exceptions, are absent from this allegedly “representative” panel.

This where public-spirited individuals might see an opportunity to lend the Council, and through it the ABC, the benefit of a broader perspective. It would make for interesting meetings if some of the seats were to be occupied by members prepared to make waves, to demand explanations for programming and hiring decisions, to venture opinions of the national broadcaster other than in terms of delirious enthusiasm for all that is put to air. The Board is under no obligation to heed the Council’s views, but putting dissident perspectives on the record would least pay the truth the courtesy of a mention.

So if you want to help broaden the ABC’s horizons, click here to lodge your application form with all its key  questions about your Indigenous status, your disabilities, ethnic background and grasp of English.

2 thoughts on “Their ABC Wants You. Apply Today!”