Let’s do a little play-by-play and compare Jeb Bush’s positions with Donald Trump’s current left-leaning views. Jeb has a single serious one—immigration—while also boasting a robust gubernatorial record of tax cuts, defending the sanctity of life, and a slew of issues that should, by rights, strike chords with the GOP activist base that turns out in force for the primaries. Trump, on the other hand, fails on what should be the two deal-breakers for the rank-and-file: he’s a Planned Parenthood supporter and an advocate for universal healthcare.

Over the past 15 years, Trump has supported partial-birth abortion, plus Obama’s stimulus package. If that was not enough to condemn him, he openly expressed the ill-advised desire for Hillary Clinton to lead U.S.-Iran negotiations! He has also bragged repeatedly about his friendship with the Clintons, and how much he has donated to their various causes—often, it seems, in exchange for access and favours. Bush’s new anti-Trump ad makes those points — although not so far, according to the polls, to his advantage.

Next, consider that Bush is seen by many as a RINO, as in ‘Republican in name only’, even though it is an objective fact that he is more conservative than Trump and has been for years. I’m not shilling for Bush, by the way, just noting an empirical truth. It’s also objectively true to say that the Republican Party’s activist base has become increasingly hardline in its advocacy of conservative principles. They tried to torpedo Mitt Romney twice for “flip-flopping” on abortion and have ousted senior moderate Republicans in favour of  Tea Party darlings. Why is it that these same proud and  rock-ribbed conservatives are falling in behind Trump, the leftmost candidate in the GOP field? 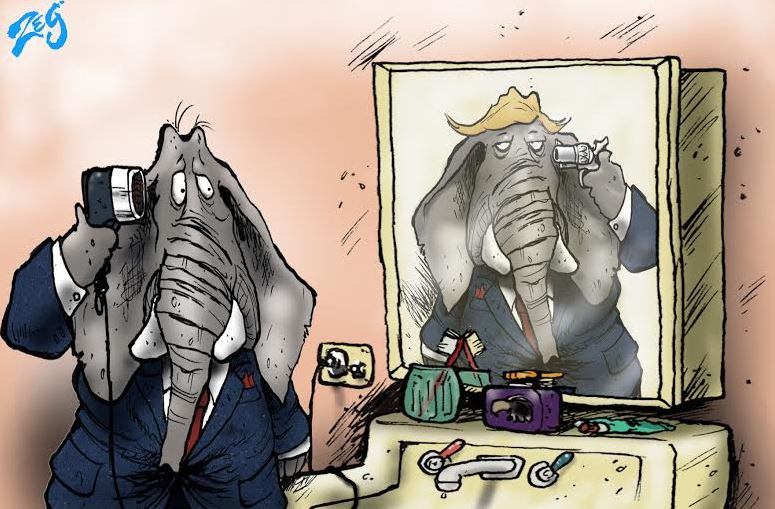 “He’s the anti-Establishment candidate,” goes the common wisdom. “The base is angry at the party Establishment for not voting conservatively enough.” So they’re going to vote for someone openly left-leaning because, well, he’s honest about it? Could that be right?”

I don’t think so. Trump’s candidacy has never about substance, not for a second. This can be stated with confidence because his convictions (and his party affiliation) have been in flux for the better part of two decades. Indeed, they still are. Early in July he called for a flat income tax, yet the very next day affirmed his support for a progressive income tax. If his supporters cared about running a well-informed, thoughtful and consistent candidate they would have dumped him by now. It seems, at least in the short term, it doesn’t matter what he believes.

There’s a bit of evidence to prove this, via Jonah Goldberg: “According to polls, the No. 1 thing Donald Trump’s fans like about him is that he ‘tells it like it is’.” I think there is a bit more to it than that. It’s the whole misconstrued package: his rudeness being seen as ‘frankness’, the towering arrogance mis-perceived as a healthy self-confidence. The ugly ties and uglier hair are forgiven or overlooked, such is the man’s appeal in these first stages of 2016’s presidential marathon. After casually dropping in on past presidential races, few expected him to be anything but a source of mirth this time around. He was the dope who ran as a single-issue Birther in 2012, long after Obama finally put that matter more or less to rest and most sane Republicans stopped caring. He is a joke, the accepted wisdom went, and not a terribly funny one.

But something is different this time around. Just what, exactly, is a matter for a Ph.D. thesis, but in terms of tactical advantage it was to his incalculable benefit that the left-leaning Trump slipped into the race under the radar of the party’s hardliners. It allowed him to enchant them so profoundly that they forgot the raison d’être for their activism: wreaking revenge on the party’s moderates in the cause of ideological purity. The question is, why haven’t they come to their senses? Surely the evidence of Trump’s ties to the Clintons must have cast the shadow of suspicion. Surely, with every respectable conservative media outlet editorialising against him (many of them vehement critics of the GOP Establishment), some doubts must have sneaked in. Yet that has not been the case.

Why is it that the GOP Establishment is widely seen by the party faithful as betraying conservatism while Trump is cited as the insurgent when he aligns with the Democratic Party on more issues than any of his competitors — aligns, that is, when he isn’t standing well to its left? Why is it abhorrent that “donors’ choice” candidates, with Bush being the prime example, are dismissed with contempt as having been bought and sold, but Trump’s buying favor with top Democrats is excused as no worse than the expedience of good business sense? Why was Romney vilified for his flip-flop on a single issue, but Trump’s entire history and worldview are excused and accepted as steps in his political evolution?

Simple: Amid the dross and duplicity of his various and changing positions, Trump’s blunt talk has resonated on two fronts. The first is his willingness to insult the press; the vast bulk of American journalists, like their counterparts in Australia, have long marched as an irregular auxiliary behind the progressive banner, which in the US should be taken to mean the Democrats. Most political aspirants cower at the mere thought of taking the media to task — a failure demonstrated only this week on the local stage when Immigration Minister Peter Dutton assailed the Fairfax press and received next to no support from his gun-shy colleagues.

The second and more important appeal is Trump’s willingness,  nay eagerness, to go where other contenders dare not and denounce the massive influx of illegal aliens. This gross and daily violation of America’s sovereignty is very much a genuine issue, one that comes to mind every time the newspapers report on some or other crime perpetrated by an undocumented alien. More than that, America’s working class is near extinction, laid low as much by Big Labour’s bloody-mindedness as by the outsourcing to Asia that it helped inspire. Look no further than the urban and industrial wastelands of once-mighty Detroit for proof of that. Re-gaining control of who comes to America and the manner in which they arrive resonates, as Trump’s polling demonstrates.

Yet the Trump paradox remains, even allowing for those twin recommendations.  If any other candidate boasted such a flagrant record of ego and wind-vane caprice, that person would have been hooked off the stump to the accompaniment of ribald laughter. It’s as though those now turning out for Trump, cheering him at rallies and defiantly informing pollsters  that he is their man, need the idea of Trump, rather than man himself. It doesn’t matter that he is every bit as immersed in crony capitalism as the loathed Establishment, or that he has not a single, genuinely conservative bone in his body. What we are seeing is the cult of personality — a lure that exerts an appeal perhaps stronger than the thrall which envelops Obama’s supporters, who can at least rest assured that their man will toe their favoured party’s ideological line. Trump’s barrackers are so madly devoted — or perhaps just mad — that they’re willing to set aside everything, up to and including their long-held and formerly strongest convictions.

Maybe, sooner or later, cold and hard reality will break the Trump spell. Traditionally, presidential races see unelectable contenders gain disproportionate prominence early on, when polling day is still far away and it is safe to indulge in political reveries. This species of candidate tends to soar early and sink just as quickly, and perhaps that will be Trump’s fate as well. As he struts and preens and sows his havoc, let us hope so.

Reflections on Socialism and Nationalism

Random Jottings in a Dark Season

It’s Not Who Votes, It’s Who Counts Them