In the days since the furor over Operation Fortitude, we’ve seen the hype boiled down to the belated realisation, once the screaming and chanting had stopped, that it was a perfectly legitimate police action. Contrary to the rash of breathless reports on the ABC and Fairfax press, the Border Force wasn’t planning to station officers on street corners and demand to see every brown person’s papers. Or, as an ABF spokesperson said

To be clear, the ABF does not and will not stop people at random on the streets… The ABF does not target on the basis of race, religion or ethnicity… ABF officers will [or, rather, would] assist partner agencies by conducting visa checks on individuals who are referred to us.

Ironically, Bill Shorten got it right, at least initially, when he mused, “if you’re going to do a blitz, I don’t know why you’d necessarily telegraph it to the media first.” That was the ABF’s first mistake. The second, which is considerably larger, was publishing misleading social media posts which did indeed make Operation Fortitude sound like a Gestapo-esque campaign of racial profiling.

By later in the day, as the social media-driven outrage — independent Senator Andrew Wilkie in the vanguard — approached peak frothing, Shorten had joined the mob to decry an operation he mow chose to present as a sinister violation of all Australians’ rights.

But the point is that it wasn’t. It was a multi-agency sting of known or suspected visa fraudsters, targeted according to police intelligence. The protestors and “social media activists”— a euphemism for angry Twitter lefties — who compelled the ABF and its partners to abandon the operation chose to ignore the clarifying comments, thereby subverting the rule of law in Australia. 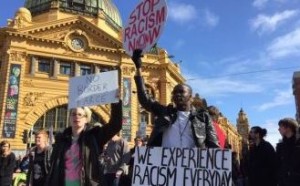 Is it really so bad as that? Why, yes, it is. The protests were led by the Melbourne chapter of Socialist Alliance and the RMIT Student Union, prominent far-left youth groups. These die-hards scrawled messages like “Shut down the racist border” and “No one is illegal” on the streets of the Melbourne CBD. The usual suspects’ (right) modus operandi is entryism: they take seemingly legitimate outrage at a clumsily worded media release and, rather than acknowledge the plethora of official clarifications, persist in stealing the spotlight while escalating a single-issue uproar into condemnation from the political friinge of the very existence of borders. This is the outrage to which the ABF capitulated, not to the concerns of ordinary Australians but to loud, agenda-driven extremists who oppose the existence of Australia as a political entity.

We in Sydney are all too familiar with this state of affairs. The Sydney University Student Union and the Sydney chapter of Socialist Alternative wreaked havoc on the Harbour City last year, storming Tony Abbott’s Sydney office, disrupting an episode of Q&A, and assaulting Julia Bishop during her visit to Sydney University. The year before, they hijacked a university staff strike and used the occasion to assault students who chose to ignore their picket line and attend classes.

These piss-and-vinegar student radicals are a menace to civil debate and, frankly, ought to be ignored. Their sole interest is advancing their fringe ideology by drowning out and intimidating opponents. It’s time for our public figures to realise that such protestors — the boots-on-the-ground and the Twitterati — don’t speak for the Australian people. The fact that they’re exceptionally vulgar and belligerent is no sort of qualification for disrupting legitimate police operations.

State and federal governments have the obligation to cut through this manufactured outrage and do their jobs. The ABF and Victoria Police should reorganize Operation Fortitude and execute the sting quietly, Socialist Alliance and the RMIT Student Union be damned. It’s what we pay them to do.