In London today, May 27, 2015, at 8PM AEST the Queen and Duke of Edinburgh, escorted by the Household Cavalry, will leave Buckingham Palace for Westminster for the State Opening of the recently elected British Parliament. The centrepiece of the ceremony will be Australian.

For with  all the pageantry, the 41-gun salutes fired from Hyde Park and the Tower, Londoners and television viewers across the world will be seeing  something different. For the second time, the Queen will be travelling to the State Opening in the Australian-built Diamond Jubilee State Coach (below), the most comfortable  of the several coaches in the Royal Mews and boasting electric windows, heating and hydraulic stabilisers. In previous years one of the other coaches was used. In fact, the Queen will have used this coach  on four occasions in its very first year in the Royal Mews. After the 2014  State Opening of Parliament, The Queen invited  the President of Singapore and then the President of Mexico to join her. 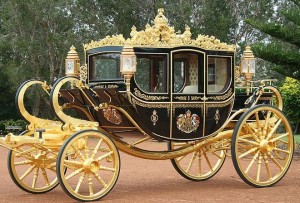 The Queen’s use of the Diamond Jubilee State Coach can be compared with her use of the oldest coach in the Royal collection, the magnificent Gold State Coach which the Queen has only used on three occasions – her Coronation, the Silver Jubilee and the Golden jubilee.

The Diamond Jubilee State Coach is a unique time capsule of the history of the  nations making  up the United Kingdom. But it is also a glorious work of art, perhaps one of the most spectacular to leave our shore . Centuries hence, people from around the world will be surprised to know that such a coach could have been designed and   built  in that very  modern country, Australia.

In fact it was built at Manly near Sydney, most appropriately in the Prime Minister’s electorate. And not only did Jim Frecklington, design and build this coach. In his simple workshop, he designed and built the Australian State Coach which through public subscription was the Bicentennial Gift to the Queen in 1988.

After the Diamond Jubilee State Coach his next  project was the restoration of an 18-pounder gun, one typically used in the First World War where the Australian contribution was extraordinary. That, too, was completed at Manly. Drawn by four horses, it led the Anzac Day march in Canberra this year.

What will be clear to all on Wednesday is that the Queen really likes her Australian coach.

The Queen of course is totally non-political, but the symbolism of an  Australian built coach being at the very centre of this great ceremony could well be indicative of the important change in the orientation of  trade and foreign policy which is about to come to the United Kingdom which, in economic terms, has gone ahead of much  of Europe.

On some predictions she could rival Germany in the size and youth of her population in a few decades. It seems the UK will significantly draw away from the EU soon; there is an outside chance that she may even leave it. UKIP’s capacity to garner many votes, if not seats, forced  David Cameron to become a Euro-sceptic whether he wanted to or not.

Is it too much to hope that Britain’s  politicians are finally realising something which  the British people always knew: loosening the ties with the Commonwealth and the Anglosphere was always a serious error, made worse by the fact that some of the world’s most  vibrant economies are now to be found in our family  of nations.

The penny will drop for the British politicians when they realise that when they free the country from the chains which bind them to the EU, or at least loosen them, Britain will  regain much of her her sovereignty. She will then be free to enter into such trade agreements as she wishes, no longer having to help subsidise failing economies  nor handing  over vast streams of taxation to Brussels. She will  at last be able to control immigration into her crowded islands.

The Diamond Jubilee Coach shows that even a new country, once a penal colony,  can be advanced economically while producing magnificent art and preserving shared learning and history. And this can be done without being shackled to some outdated bureaucratic monstrosity.

Dearth of a Salesman

Invasion is the end of land rights