What Our Arts Dollar Buys

As a resident and voter in the federal seat of Gellibrand, a blue-ribbon Labor stronghold to the west of Melbourne, the news that Attorney General George Brandis is tampering with the way arts dollars are distributed came as a great cause for concern. Not that I get to pocket any of that cash, mind you, nor am ever likely to be so lucky, given that conservatives and conservative publications, like Quadrant, are forever at the back of the line when the Australia Council distributes its luvvie stipends.

No, the chief concern was that my sleep would be disturbed by the wailing of artistic neighbours fearful that the next tranche of taxpayer charity might not arrive. According to the Australia Council website, some $1.8 million in arts dollars were showered on my electorate in 2014, which is no small sum. The pain, if one is to judge by the anguished howls of the arts community as reported in the press, must be intense.

So last night, once the Spirit of Tasmania had left Webb Dock, sounded its foghorn and sailed past my front door, I sat on the porch and listened in the silence for wails of dismay. The only mendicant to be heard, however, was the cat demanding its nightly handout of stinky fish.

Could it be that Gellibrand’s arts dollars won’t be missed? Or might the silence have something to do with an honest self-awareness – the tacitly acknowledged truth that OzCouncil cash hasn’t bought anything much in the way of beauty and that, all things considered, the hooked-in, hip-dude luvvie community grasps that it has been lucky to get away with producing so little at such cost for so long?

In an effort to resolve the mystery I went inside, fired up the computer and conducted an audit to learn where Gellibrand grants had gone and what they bought. After backgrounding the 13 recipients listed below – the first of those listed in the Australia’s Council’s search results and roughly one-third of my electorate’s total recipients – the answer to that question would appear to be not much, not much at all. Remember, the list below is from but one electorate. Just imagine the galaxy of artistic talent being succoured across all of Australia.

Readers can judge for themselves if Senator Brandis’ initiative, the details of which have yet to be laid out, just might constitute a long overdue and worthwhile reform. Readers with a longer view might also wish to consider that, unless Brandis lays his plans for the $104 million scheme with great care, any change of government will see the left invade and colonise his initiative, as is its wont.

Now, as a case study in arts funding, here is a baker’s dozen of one electorate’s latest recipients:

Aboriginal musician Bart Willoughby, $90,000 to “tour and promote two recent albums altering perceptions of the organ by my musical approach to it.”

The organ would appear to be the monstrous instrument in Melbourne’s Town Hall, which Willoughby played to accompany a recent pageant of Indigenous victimhood, complete with choir, brass section, strings, interpretative dance and a mid-performance declamation of how racist white Australia imposed reading and writing on his forebears in an effort to promote “civilisation”. That bit comes at the two-minute mark of the video below

Curiously, this theatrical manifestation of Aboriginal oppression was couched in the musical language of American spirituals, which is something of a change for Willoughby, who often highlights the swamping of Indigenous culture via Jamaican reggae.

Musician Joel Cerdor, $7000, to “build a portfolio of work as a promotional and networking tool to further career opportunities.” As he explains in the video below, the money financed a stint Paris where he worked to master Iran’s answer to the banjo. 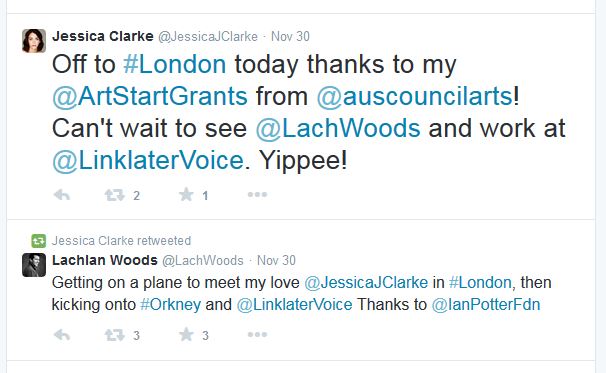 Actress Elizabeth Dawson-Smith, $9599 to “assist with developing my creative arts business.” This “business” includes the art of holding one’s breath 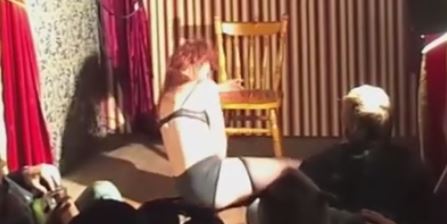 Soprano Giuseppina “Josephine” Grech, $10,000 to “develop my skills, portfolio and network as an opera singer”

Ms Grech has a beautiful voice and can actually sing. How did the Australia Council let her application slip through?

Sound artist Brigitte Hart, $10,000, to “advance my technical & professional skills for building a globally recognised sound art practice”. Ms Hart of late has been treating Londoners to her vocabulary of strange electronic noises. London is quite some distance from Footscray.

Uncultured bogans, the sort who pay taxes, will be astonished at the money to be found in a rapidly rotating Styrofoam cup.

Footscray Community Arts Centre,  $5000, for “building capacity with artists in effective self care when working in complex community settings”

Waitress and aspiring arts festival organiser Melissa Edwards, $5213, to “explore and develop my practice at European Festivals Association’s Atelier program in Poznan Poland.” From Poznam, Ms Edwards reports that the streets are chilly and lined with “historical buildings”.

Footscray Community Arts Centre (again), this time scoring $120,000 to “drive social, cultural and artistic vibrancy through creativity and collaboration” especially on May Day

In the video below, one such collaboration. With $120,000 in its community coffer, why not paint that plywood box which represents “democracy” and in which various groups attempt to find “equality and freedom”? What the pantomime cow and the man in the chicken suit expect from their right to approach the ballot box is not explained.

Austhetic, $20,000, to cover a wall with approved grafitti as an artistic response to unapproved graffiti.

Western Edge Youth Arts, $30,000, to produce a “community devised installation performance about gender and culture by 45 CALD young people”. Translated, that amounts to a just-concluded three-night run of Iago, “which sees the plot of Shakespeare’s Othello re-imagined inside the confines of a rat-infested boxing gym and spliced with young people’s stories reflecting the cultural diversity of Australian society.”

A rat-infested gym and Australia, they’re the same thing really – except the rats don’t eat government cheques before they can be cashed.

Finally, just by way of an artistic bonus, follow this link to hear the work of Gellibrand sound artist Makiko Yamamato.

That and other similar efforts warranted an award of $10,000.

Good work if you can get it, eh!

Roger Franklin is the editor of Quadrant Online. Quadrant received $25,000 from the Australia Council in 2014. Not a penny of that cash has been spent on romantic re-unions in England or jaunts to any other appealing destinations.

Abbott’s Sharp Kick to the Sporran

What Has the Monarchy Done For Us?