ABC TV offers some genuinely funny programs. I’m not referring to the leadenly awful Clarke and Dawe, the ubiquitous Stephen Fry or Wednesday night’s plodding cavalcade of allegedly humorous offerings. No, I’m referring to howlers, factual and technical, on ABC  TV current affairs. For example, I love the national broadcasters live-crosses to reporters in the field, which so often see things go wrong as we wait to see how the presenter copes. Then there’s ABC reporters’ innumeracy.

A recent edition of 7.30 included a bulletin on Clive Palmer’s business troubles. 7.30 reporter Peter McCutcheon intoned: “His prize asset is the lease to the massive Sino Iron project in West Australia’s Pilbara, projected to produce more than 24 billion tonnes [McCutcheon paused to emphasise the word “billion”] of high grade ore a year.” Huh?   At the current price of about USD52 a tonne, that’s $US1320 billion, or $US1.32 trillion, revenue a year for Sino. No wonder poor little Twiggy Forrest  of Fortescue wants a local cartel!  The correct figure seems to be 24 “million” tonnes. Maybe it’s better for an informed stockmarket if ABC reporters just refer  to “lots  of iron ore”.

Unlike other blues, the ABC has let this one stand. The exercise in innumeracy can still be heard roughly two minutes and thirty seconds into the clip, which is available here. No mention of those erroneous billions remains in the accompanying transcript.

But the real hilarity on 7.30 was stand-in presenter Virginia Trioli’s introduction to reporter Karen Percy’s story on Australia’s population growth and the resulting need for more infrastructure. Not what might be regarded as a topic apt to tickle funny bones, as Gerard Henderson noted in his Media Watch Dog, the report included an archival shot of long-gone Labor leader Arthur Calwell, whom it identified as “Australian Prime Minister 1960-67.” Giggle. 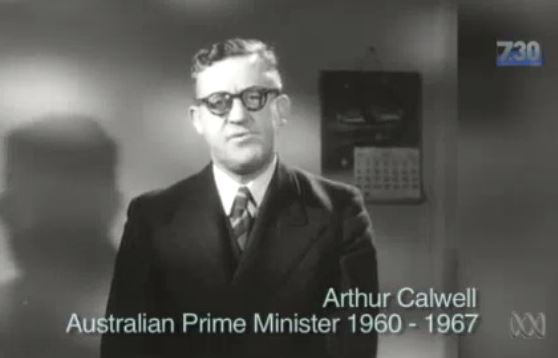 But Henderson missed more fun as the segment continued.  Karen Percy’s story began cutting between talking heads — KPMG demographer Bernard Salt, in real life lavishly foliated with a bushy head of hair, and the empirically 100% bald Richard Denniss, Executive Director of The Australia Institute.  As far as the ABC was concerned, Salt is bald and Denniss enjoys a handsome hirsuteness. That’s because the men’s names were muddled in the captions at the bottom of the screen. Not just once, but consistently — until, at some point after the item went to air, the name tags were correctly re-installed.

Incidentally, the ABC transcript   shows reporter Percy describing Denniss’ group as “the progressive think tank, The Australia Institute”.  My online dictionary defines “progressive” as “making progress toward better conditions; employing or advocating more enlightened or liberal ideas, new or experimental methods, etc.: a progressive community.” Denniss’ Australia Institute tilts Left, as you might expect of an organisation founded by Green luvvie Clive “Suspend Democracy!” Hamilton, who ran it till 2008. Anything of the Left, according to the impartial and apolitical ABC, must be regarded as “progressive” by definition. Therefore, The Australia Institute is progressive. The ABC style book must say that right-leaning think tanks, such as The Institute of Public Affairs or The Sydney Institute, being at least reactionary if not downright evil, cannot ever be described on the  ABC as “progressive”.

Another talking head to emerge on the 7.30 segment was Tasneem Chopra, darling of the multi-culti set. As self-described on her website, she is “a prominent activist with a passion for addressing social justice issues.” Activists with “passions for social justice” e.g. Greens, are far from rare on ABC programs, and if they are   attractive female Muslims, well the ABC swoons for them, no matter the piffle they are peddling. For example, Tasneem went un-corrected on Q&A last August when she insisted, as per the transcript below, that the “Muslim community” was in Australia before Captain Cook.

So one would imagine that even the lowliest ABC TV apparatchik would know the difference between stylishly-clad Tasneem Chopra and far less fetching, bald-headed think-tank economist types.

Alas, the 7.30 show’s graphic identified her (fleetingly, I admit) as, “Richard Denniss”. Once again, somewhere in its $1.2 billion budget, the national broadcaster found a few pennies to insert post-dated corrections, but not to add a footnote admitting the initial broadcast was a compendium of error and incompetence.

Rupert Murdoch’s papers and even Fairfax’s daily abuses of forest products each adhere to policies of publishing corrections, but our taxpayer-funded ABC  TV is above all that. Its mistakes disappear retrospectively, like the Soviets used to erase Trotsky from old group pictures with Stalin. So if you think iview accurately reproduces previously-aired ABC content (“Never Miss a Moment”), think again.

At some point after Gerard Henderson, apropos of Prime Minister Calwell (1960-67), remarked, “this description remains on the ABC’s transcript and on the online version of the program” the broadcaster set to work with an eraser inserted the correct description, again without acknowledging its blunder.

Anyway, I’ve written to the ABC Complaints Department and await a response:

I don’t think that is correct but of course I may be wrong. Could you please correct the item if necessary.

Re 7.30 March 25: This segment showed Bernalt Salt as bald and Richard Denniss as not bald. It also showed Richard Denniss as female and wearing Islamic dress. It also described Arthur Calwell as Australia’s Prime Minister 1960-67. I don’t think these points are correct, but I may be wrong. Can you do a check please and correct if necessary?

The segment also described The Australia Institute as “progressive”. Is this a violation of ABC policy of political impartiality? If not, what is the evidence that that Australia  Institute is “progressive” relative to other think tanks such as The Institute of Public Affairs?

FOOTNOTE: Media junkies may appreciate this background on TV “supers” ie labels, from one of Quadrant’s  ABC Deep Throats. It suggests how the stuff-ups happened.

“Supers’ are supplied by the reporter via a list to the director who ‘superimposes’ them onto the talking head live from the control room to identify them as the story goes to air. Given that the director often doesn’t know the interview talent by name, the reporter also must give a list of the ‘times’ to play the super. ie Jim Smith 3-6 seconds; John Cook 14-18 seconds. That way the director knows Jim Smith needs to be identified 3 seconds into the story and he has 3 seconds to get the super on and off the screen before he needs to super John Cook at 14 seconds.

Of course there can be mix ups in the control room, and the wrong supers get put on the wrong heads. Usually it’s the presenter’s job to apologise for any cock-ups straight after the story in her back-announce. ‘That was Karen Percy reporting and we made a mistake there incorrectly identifying Bernard Salt as blah blah.’

It is perfectly normal and proper that incorrect supers be corrected before any replaying of the segment ie on future bulletins or on iview. No TV station is going to let mistakes like that stay in the system.”

When not keeping an honest eye on the national broadcaster, Tony Thomas blogs at No B-S Here (I Hope)

Not an Australian story