So how’s it going with Hal G.P. Colebatch’s book, Australia’s Secret War? Sub-titled “How unionists sabotaged our troops in World War II”, the book gets no marks for political correctness from the left-leaning literary establishment.

They intended to give it the totschweigen treatment (kill by hushing up or ignoring it, as Shelley Gare explained in Quadrant) but word-of-mouth gave the book a life of its own and Prime Minister Abbott was perverse enough to endorse it as joint winner in the history section of last December’s literary awards.

Colebatch has a problem with one foot and wore a medical boot to the prize presentation at the National Gallery, Melbourne. Tony Abbott noticed him having difficulty, took his arm and helped him climb the steps.

Others were less compassionate. One of the losing short-listed authors for the same prize, onetime radio personality, ex-Fairfax columnist and now serial Tweeter Mike Carlton, immediately complained loudly on social media that the award was due to the conservative political bias of judges Gerard Henderson and Peter Coleman. However,   Ross Fitzgerald on the judging panel voted for Colebatch, though more left-leaning than conservative . Similarly, left-leaning Ann Moyal voted for Colebatch to make the short-list (but not the prize).

The shared prize, worth $40,000 to Colebatch, led to a ramp-up in Christmas sales of his book, a momentum that kept going through to the new year. 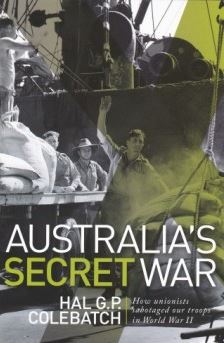 All up, sales from the 2013 first issue to today total more than 10,000 copies, an excellent result for boutique Quadrant Books and its hardback at the upmarket price of $44.95. Assuming Colebatch gets the usual 10% royalty, that’s another $45,000 for him.

The first print run in October, 2013, was 1000 copies but that sold out within weeks. “Since then we’ve ordered five more reprints at 2000 a time,” says Quadrant publisher Keith Windschuttle. “Its 10,000 copies sold is very good going for a book $10 pricier than the normal novel or gift book.”

Colebatch’s book lifted the lid on sordid behaviour of the wartime union movement, especially in the wharf, coal and transport sectors. These key workers treated the war as an opportunity to elevate their pay packets by industrial blackmail, regardless of damage to Australian troops fighting the enemy and the jungles. Additionally, watersiders were prone to plundering our military’s equipment, armaments, food and even presents sent to soldiers by their families.

As Colebatch’s critics have noted, some of his anecdotes from elderly veterans are misconstrued. On the other hand, I have come across documented anecdotes that Colebatch missed. Could one even imagine, for example, an Australian wharfie stealing emergency canned food from a lifeboat?  In his memoir Comrade Roberts (Desert Pea Press, 2006), the late Kenneth Gee QC recalls this wartime incident during his former political life as an organiser for the Trotskyist Communist League. The ship then joined a convoy travelling north and was sunk by a Japanese sub off Gladstone.

In other words, during the Second World War, when our population was less than a third of today’s, strikes were ten times more than the current rate. From this simple sum, Colebatch’s overall thesis is proved: Australia’s wartime experience was riddled with strikes and strikers. And as he says, all Australia’s historians to date have tiptoed around this topic.

Let’s move on from history to the recent history of Colebatch’s book. Quadrant’s Keith Windschuttle says Colebatch first approached him with a manuscript in the late 1990s. “I thought the topic was electrifying but the book needed more work. It didn’t have enough corroboration then,” Windschuttle says. “In the subsequent 15 years, Hal put a lot more work into it.

“He came back to me with a manuscript in 2012 and it looked much better. He’d had a tough time with rejections from other potential publishers but Quadrant Books is a boutique publisher with a loyal subscriber base who I knew would like it. The topic appealed to people like me, the offspring of fathers who fought in the Second World War and who had heard anecdotes and rumours about the unions in wartime, but never the full story. My own father fought the Japanese in New Guinea, and I remember him being very angry about the unions, which I later thought was simply due to his innate conservatism.

“But my earliest childhood memories during the war and in the early post-war years are of frequent blackouts at home with my mother in the Sydney suburb of Belmore. Neighbours would say, ‘Oh, the workers at Bunnerong power station have gone out again!’ So everyone was aware something serious was going on.

“Many other returned soldiers gave their children fragments of information about union mayhem during the war, but the leftist preferences of the Australian history profession meant none of them ever examined the overall picture.

“Hal has performed an enormous public service by pulling these accounts together. Readers can now discover the terrible conditions that union strikes, delays and pilfering imposed on soldiers in the front line while they risked their lives to protect those at home.

“In my view, it shows that during the war the labour movement was collectively guilty of sedition. Labor Prime Minister Curtin knew this and, in the end, it killed him. Hal’s chapter on Curtin is convincing in showing that the labour movement’s betrayal of its own country broke its leader’s heart. ”

The book has gone virtually unreviewed, although Quadrant sent copies to all the usual media.* Windschuttle puts this down to the fact that, like people in the publishing business, mainstream literary editors tend to have pro-Labor leanings.

However, Windschuttle says publicity in two media outlets brought the book to a mass readership. Columnist Miranda Devine gave it a full-page write-up in the biggest selling newspaper in New South Wales, the Sunday Telegraph, and on Radio 2GB Alan Jones broadcast an interview with the author, giving it another boost.

The book is distributed to bookshops and online purchasers by Quadrant Books itself, out of its office in Balmain. Soon after the initial publicity in November, 2013, Windschuttle says it was fascinating to see the pattern of orders from bookshops, showing how, after the initial publicity, sales were largely driven by word-of-mouth recommendations from readers to friends and relations.

“Sitting in our office and watching orders come in from bookshops,

Libraries are useful buyers of Australia’s Secret War but nothing exciting. Librarians seem to share the same political prejudices as book publishers and literary editors. A sampling of Victorian library clusters  (i.e. groups typically of three-to-five libraries) found 23 clusters stocking one copy of the book, two stocking two copies, and two stocking none. The biggest stock I could find was at Nedlands, Colebatch’s own suburb, with six copies.

Colebatch remarks that an air force veteran in his 90s dropped by recently and bought eight copies for his friends or their adult children.

“I got my interviews at the last minute from veterans who are now mostly infirm or dead,” Colebatch says.

Asked how he came to write the book, he says:  “As a small boy I sailed from Perth to Sydney with my mother and my grandfather Sir Frank Gibson to a fireman’s convention. We were on the old Kanimbla and on the stern was a circular platform that I guessed was the base for a four-inch gun. Many years later I was talking to a veteran officer from the Kanimbla and he remembered that platform well. He and fellow-officers mounted the gun there themselves, because the wharfies downed tools wanting danger money. That was the first germ of the story, in my mind.

“I began collecting stuff on wartime strikes as a hobby. I was very surprised to discover how widespread this industrial mayhem was. Eventually my mentor Paddy O’Brien in the politics department at the University of Western Australia urged me to do a book on it.

“I began putting ads in newspapers asking for vet’s stories, but insisting that they include their wartime serial numbers as a first check.”

Colebatch is already thinking about follow-up work on the same topic.

“A second edition of this book would include the union activities during the Korean and Vietnam wars. I’ve had some feedback about those from vets but haven’t yet begun advertising for stories. I should get on with that.”

Since the book won the Prime Minister’s prize for Australian history, Colebatch has been at loggerheads with Peter Stanley of the University of New South Wales, the fiercest critic of the book. Stanley said, among other things, that Colebatch had not cross-checked his informants’ stories against union records. Colebatch replies that unions would hardly have recorded that on such-and-such a day, their members pilfered Red Cross and family parcels destined for troops in the islands.

He did   quote a number of memoirs of unionists. And near-contemporary accounts by men like Vice-Admiral Collins, Australia’s highest-ranking naval officer) Jo Gullet, Australia’s most decorated soldier,   Charles Court (“strikes were a constant background to everything we did”) and Sir Bernard Callinan  are unlikely to be a  pack of lies, Colebatch says.

Colebatch’s current project is a biography of Victorian Premier Sir Stanley Argyle, now about half-finished. It will be his fourth biography, after those on his father, Sir Hal Colebatch, briefly a Western Australian Premier, WA mining magnate Claude de Benales, and Liberal MHR Bert Kelly.

He and his collaborator Jessica Fox (a mathematician who checks his science)   also have two full-length science fiction novels accepted by Baen Books in the US – “Time Machine Troopers” and “Counterstrike”. In the field of science fiction, Colebatch is a writer of world stature. All up, he’s written about 25 books, including eight poetry volumes, a dozen fiction and several institutional histories.

The 2015 four-day Perth Writers’ Festival has just finished, with more than 100 sessions. Despite winning the Prime Minister’s prize, Colebatch was not invited to join the 93 writers presenting there, led by the Green’s Bob Brown. In fact, despite his long history as an author, Colebatch never has been invited once to speak at his home-town writers’ festival. The only time the festival invited him to anything was four years ago, to compete with schoolchildren in an essay-writing competition. “I sent back a snooty reply that with my track record, I wasn’t really tempted,” he says.  “The university was embarrassed and promised to invite me to a grander role, but never did.”

* Rod Moran  reviewed the book in The West Australian.

Clinton’s responsibility for the loans crisis