The Apotheosis of Malcolm Fraser

He was at the end a sad and silly old man — well-meaning, to bestow doubt’s benefit, but howling on the heath of his final years’ irrelevance all the same. Malcolm Fraser, that contradiction in terms, dead at 84.

He was the imperious upholder of tradition who rejected convention and blocked Supply, the leader of a party allegedly committed to small government who declined to cut taxes. The very devil to those who took to the streets on November 11, 1975, he will be mourned by many of those same people, who might once have delighted in burning him at the stake. To think that the likes of Julian Burnside will be shedding telegenic tears as his casket passes by, well, if Fraser achieved nothing else, let Australia’s twenty-second prime minister serve as a reminder that life can take some very queer twists indeed.

Blubbered Petro Georgiou, once the Member for Multiculturalism and not much else, to the ABC’s Jon Faine within minutes of the announcement, Malcolm Fraser “carved his own path.” Him and Ludwig Leichardt, so take that and all the other graveside platitudes we’ll hear over the days to come for the precious little they are worth.  De mortuis nil nisi bene, as the Romans liked to say, speak no ill of the dead. In the case of this headstone it will be a greater challenge than most. 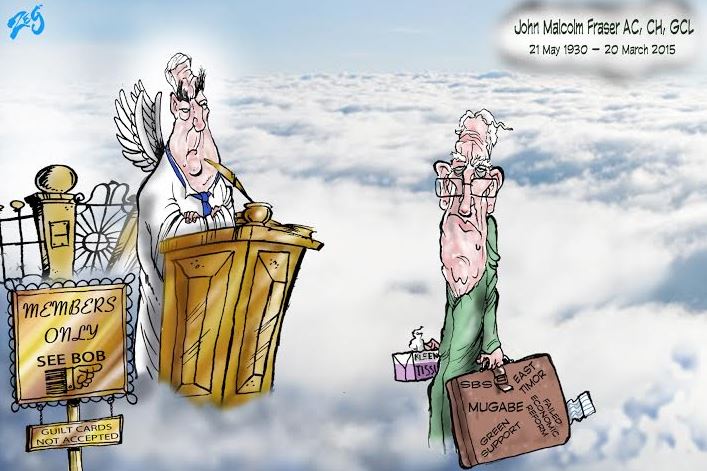 As to the inevitable, effusive gushing of the sodden-hanky left, well that as it should be. Like the reformed tosspots trotted out by the temperance preachers of old, Fraser was their validation that the benighted might be led unto the light. Once, so very long ago, a young Defence Minister was set upon by protesters infuriated by a stone-faced insistence that Australia belonged in Vietnam. Now they and many of their children will hail his bravery and candour in recently asserting that ANZUS is gross liability and the US never to be trusted.

In old folks’ homes come the next election, those of the same persuasion may well be volunteering to help the doddery ancients fill out their postal votes, but what Fraser surrendered was rather more sad than the borrowing of a senior’s ballot and franchise. A few years back, Fraser advertised for a paid companion to take him fishing, such was the extent to which his switch of loyalties had robbed him of real friends. The left was more economical. It made him their buddy for nothing, save the cost of an old man’s dignity and the frequent loan of a pulpit he believed might restore it.

Below, a random selection of Fraser’s presence in the pages of Quadrant and elsewhere. As mush runs a gusher, it might be handy to bookmark this page in order to be reminded that the haloes turned and fitted by stage-managers of partisan public spectacles are often made of cheapest, tarnished tin.

Should his unhinged insights on trade and the US alliance be heeded, Australia would go down in history as a tragic and unforgettable sequel to that other ornament to Malcolm’s brilliant career, Robert Mugabe’s Zimbabwe

Is it relevance-deprivation syndrome that inspires those frequent pronouncements on a world which has moved quite clearly beyond Malcolm Fraser’s ken? Geriatric perversity, a compulsion to betray … who really knows? One thing, however, is certain: his opposition to Anzus is a new and contemptible low

Every leftists’ favourite conservative ex-PM is at again, using the Joint Strike Fighter to score a few precious headlines with his demand that Australia abrogate its ANZUS obligations. Is there nothing this pathetic figure will not say to illustrate his remove from reality?

The former prime minister conceded that his memory had grown somewhat clouded and urged readers of his biography to remember that it was author Margaret Simons’ responsibility to get the facts squared away. Gerard Henderson maintains it was a duty she neglected

3 thoughts on “The Apotheosis of Malcolm Fraser”

We Have Ways to Make You Walk

A Challenge to Bruce Pascoe: Let’s Have a Debate