There are no dead white economists. Apple has just proved it. Let me explain:

You will recall the 1899 publication of The Theory of the Leisure Class: An Economic Study of Institutions, in which Thorstein Veblen (left), a sort of Norwegian-American quasi-Marxist misanthrope, took upon himself to unpick the United States of America. In his socio-economic treatise, he coined the enduringly useful term conspicuous consumption. While he was mostly concerned with the stratification of society (and exploring it in an anthropological sense) he was one of the first to see the importance of technology in shaping the modern industrial society.

This approach led him to examine the varied human responses to price signals; as a result he was the first to hypothesise the positive relationship between price and demand due to what we know as “keeping up with the Joneses”.  Here’s the distortion to demand, graphically: 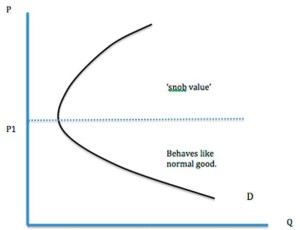 Later economists embraced the idea, and dubbed as “Veblen Goods” products for which elevated prices attract, rather than repel customers.  Exclusivity paid off for Rolls Royce, for example. Today, technologies can create cults whose members, as early adopters, gain prestige by identifying themselves as world citizens. Canny marketers then pushed the concept of “Veblen Goods” to its logical limit. If a product has such a following that customers appear insensitive to price, and therefore loyal despite competition, price and profit can be increased hand in hand.

Apple Inc. (NASDAQ code: AAPL) has just announced the biggest quarterly profit in American history – US$18 billion, largely attributable to increased sales of iPhones, much of it in China. Analysts had been ratcheting up their sales forecasts for weeks, to 69 million units, but the total of 74.5 million iPhones sold in just three months stunned everyone.  Here’s the proof those profits came from the iPhone, the quintessential Veblen Good:

The iPhone 6 is now the most expensive phone available on the Australian market; the 6Plus model, with its 5.5” screen, is $200 dearer than Samsung’s Note3, the phone which pioneered the large screen. The term phablet is now being heard.

Clearly, there are a lot of people in the world, including Australians, willing to pay a thousand dollars and higher for mobile phones that will do little more than competitor models available at half, even one-third, the price.  At that size, the 6Plus model is certainly conspicuous. Thorstein Veblen continues to make his point from the grave.

Ironically, the bigger screen sizes repudiate one of Steve Jobs’ dicta, that they were too big to hold and operate with one hand. But just as Apple has abandoned his insistence on the single-button mouse, we observe that more rational – or at least more flexible – management is now in place.

Get Your Indigenous Healing Creme

How the left colonised the ABC