Nothing Funny About Their ABC

What is most likely to happen when a human body’s rapid forward progress is suddenly arrested at 30,000 feet might be described as a mercy of physics. You’re sitting there, perhaps strapped in, perhaps not, when the pressurised integrity of the aluminium tube in which you’re flying is explosively ruptured. Deceleration is extreme and immediate so, if you’re lucky, the sudden whiplash snaps your neck and that will be the end of it. Alternately, the thin air plunges you into a breathless oblivion even before the sudden chill of the stratosphere’s subzero temperatures can do likewise. And if you’re not lucky – if, say, you survive the fuel tank’s fireball and thicker air closer to sea level restores consciousness in those last few seconds before impact? Well those who find your body (or parts of it; you are apt to be torn to pieces during that long tumble to earth) might come across a head still sporting one of those drop-down oxygen masks.

Yes, it’s a fun topic alright, although not everyone sees it that way. Take the poster at the quora.com bulletin board, for example, who penned a recent plea for information about what his or her relatives might have endured when a Russian-made Buk missile tore apart Malaysian Airlines Flight 17 over the Ukraine, the last seconds of an 11-year-old nephew preying especially on the writer’s imagination. Such is the request’s anguish that the plea for information begins with the advice, “Thank you for the condolences, but please don’t post them as an answer.”

There would have been no need to request sympathy be withheld if the writer had directed that request to the Australian Broadcasting Corporation, which last night on its 7.30 programme, allegedly a serious news magazine, had lots of ABC-style fun with an outrage that claimed more than three dozen Australian lives. Those of us who pay the national broadcaster’s bills (and the stupendous salaries of its managing director and family circle of married-to-each-other talking heads) might see little opportunity for levity in an episode of mass murder, but that just proves why normal Australians don’t figure amongst the broadcaster’s stars: dim suburban creatures, they just don’t recognise that market-failure niche we’ve heard so much about.  Managing Director Mark Scott, who bills himself as the broadcaster’s “editor-in-chief”, knows better. If commercial broadcasters aren’t clambering atop a mound of butchered Australians to laugh at a Prime Minister determined to seek justice in their name, then Scott’s minions must loosen their jocularity straps and let fly with the thigh-slappers. Here is a link to the 7.30 segment we all paid for. 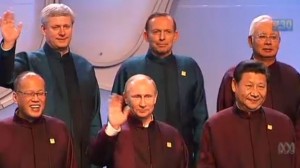 Some people might be offended, sure, but one gathers the ABC sees their feelings as unworthy of consideration – not when there is an opportunity to ridicule a Prime Minister of the wrong party, a leader who had brazenly announced his intention to confront the leader of the nation that sponsors those who fired the missile which snuffed out 38 of his fellow citizens.

The ABC might have been obliged to take those deaths seriously if Tony Abbott had not used the term “shirtfront”. Had he tapped another sartorial metaphor  — “buttonhole”, for instance – it might have passed with comment and snickering. No chance of that, however, thanks to the term’s sports-field heritage. Abbott has been photographed in Speedos, his uniform as a volunteer lifesaver, and in Lycra on a bicycle, and these items of attire seem greatly to amuse ABC types. Perhaps they remain so coloured by admiration for Julia Gillard that the heftily ballasted profile of an ambulatory avocado is now the national broadcaster’s ideal.

Whatever the reason, the ABC did itself proud with the shirtfront segment, with all the Scott-era innovations that are now part and parcel of the broadcaster’s nightly fare on display. There was the same callousness we saw when The Chaser made merry with cancer-stricken kids, plus the nose-thumbing determination to deliver mega-dollops of humourless bad taste to the nation’s livingrooms. Cracking wise about a planeload of murdered tourists, what fun! Also, the voiceover’s American- and Russian-accented commentary and ’strine narrative was stitched together from whole cloth, just like that earlier and thoroughly discredited shock-horror scoop that RAN sailors were torturing  illegal aliens with hot engine mufflers.

Rather than real journalism and a real journalist – you know, someone who might have told the producer ‘this segment isn’t funny and can only inflict further pain on those grieving Flight 17’s dead’ —  the spot was narrated by a certain Kirsten Drysdale (right), a former hockey player whose previous media experience has been running a little blog about her Rhodesian grandfather’s adventures as a game warden and punctuating with a dash of blonde ditziness the gratuitous obscenities that figured so prominently in other ABC and SBS variety shows of which she was part, Hungry Beast and The Chaser most notably. Who knew that Australian TV was running a deficit of blonde airheads? Editor-in-Chief Mark Scott, apparently, which probably explains his $900,000 salary. That sort of acumen doesn’t come cheap.

And Ms Drysdale’s credentials? Well, the first would appear to be that, once you get inside the ABC, you can pretty much count on staying there. Sometimes it is not even necessary to cohabit with someone already on the ABC payroll, as the ubiquitous Marieke Hardy could attest after two painfully unfunny, publicly funded seasons of her co-authored sitcom and ongoing occupancy of a First Tuesday chair from which to extol her taste in literature. Ms Drysdale has not yet embedded herself so deeply in the ABC’s affections that she is paid merely on the strength of a family name, but she is certainly sympatico with ABC norms. You know how it goes: start with lots of tweets hailing other ABC staffers and promoting causes of mutual interest — things like the injustices done to asylum seekers, free range eggs and Coca Cola’s deviousness. Then you wait for the ABC to sink low enough, an assured and ongoing process, and step happily and permanently aboard. To seal the deal recite a little doggerel about your labia and clitoris. Yes, really.

Oh, and inconsistency would seem to be a job recommendation as well.

Back in January, Ms Drysdale broadcast a tweet that linked to an LA Times report of a man who received a promotional letter from an office-supply retailer addressed to “Mike Seay, Daughter Killed in Car Crash.” Ms Drysdale seemed not to approve (right). 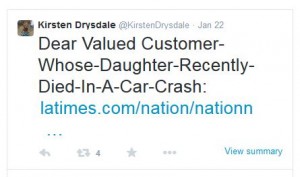 If only the retailer had sent that and other letters to the families of those murdered at 30,000 feet, one guesses 7.30‘s “latest recruit”, to quote compere Leigh Sales’ introduction, would have had no problem at all.

The ABC’s “editor-in-chief” seems to be troubled not in the least by the 7.30 segment. He must have perceived a market-failure niche for silly blondes and ghouls.

Roger Franklin is the editor of Quadrant Online. While it costs him only a few cents per day to support the ABC, he regards that as far too much to pay for the noxious crap put to air by an “editor-in-chief” who doesn’t edit.

The lost chords of Indigenous learning