Jonathan Holmes for the Defence

Good Lord, one tries to lead the benighted unto the light, but it’s a sad and frustrating business. Take Jonathan Holmes, for example, and not necessarily as the American comic Henny Youngman might have wished. Several weeks ago, a Quadrant Online item prompted a huffy note from the retired Media Watch host, directed not to the author but to my boss, Quadrant editor Keith Windschuttle, who had better things to do and passed it on. An exchange followed, with views and perspectives on several matters passing to and fro –the nature of hypocrisy and the national broadcaster’s appropriate place in Australia’s media landscape especially.

Affronted that his endorsement of Professor Barry Spurr’s private emails being pillaged and published seemed at odds with his own opposition to the release of ABC colleagues’ astonishingly large salaries, including his own, Holmes needed reminding what those pay cheques, and the rest of the ABC’s $1.2 billion annual budget, actually buys:

The ABC and many of its productions seem to me, and to many others, to represent the fruit of a mindset that can flourish only in protected isolation. I don’t know if you’re familiar with gigantism in isolated populations, but it seems to me instructive: mice marooned on an island lacking natural predators grow larger and larger, generation by generation, simply because they can. Then cats arrive and the population is eliminated.

In its isolation, in the absence of effective and ethical supervision, the ABC has become a rodent of extraordinary size. Around it, the currents of Australian life surge. Some 53% of our countrymen install a purportedly conservative government in Canberra, yet still I wait for the national broadcaster to add a single conservative, classic liberal or free-market libertarian voice to its cast.

How much better would your own former show have been had it come with two comperes — you to sneer at News Corp, your counterpart to say “Hang on a tick, Jonathan, that’s a bit unfair….”? Instead, because the format ruled out pitting idea against idea, because its sensibilities were rooted in green-left orthodoxy, Media Watch’s worth was swallowed by its uncontested arrogance. Offshore, just now visible on the horizon, there is a ship loaded with frustrated critics and their hungry cats. Should the ABC continue to provide reason for setting them ashore, the result might well be the end of the ABC, rather than its reform.

It seemed a reasonable case to put, and when Holmes brought the exchange to an abrupt end there was some small reason to believe that his horizons had been expanded, even if just by a few slight degrees. Missionaries may have taken consolation in the same thin hope when being tossed with carrots and yams into the pot, although there could be no hot water this time. As he no longer presides over a staff of ABC “researchers” whose practice it is to wrong-foot editors with imperious demands for explanations late on Friday afternoons, when they have little time to respond before Media Watch’s deadline, there would be no chance of a Monday night king hit, complete with those sneering, Ocker-accented voiceovers to emphasise the ABC’s contempt for those who misplace commas, doubt that Tim Flannery is a genius, or work for Rupert “666” Murdoch.

These days, Holmes tosses his irregular thunderbolts only from the eroded Olympus of the Fairfax Press, where one such pronouncement today splutters and fizzles on the Opinion pages of The Age and Sydney Morning Herald. His message is simple: That grossly offensive, unfunny and insensitive skit about Flight 17 which 7.30 put to air earlier in the week in no way demonstrates that his former employer has it in for Tony Abbott and the Coalition. Yes, really, that is what he is asking Fairfax readers to believe, so it seems all those words  in the cause of directing his gaze toward the cossetted insularity and taxpayer-funded arrogance of his former employer were wasted. 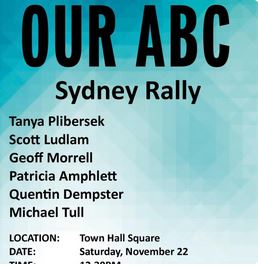 The thing, though, about any defence of the ABC is that it can never go beyond mere assertion. Try mounting a case against reform and renewal and any bid to explain why the national broadcaster should be encouraged to steal commercial rivals’ audiences is bound to trip and tumble on that very word – “rivals”.

The ABC, remember, is supposed to be a “market-failure” broadcaster, to use self-anointed “editor-in-chief” Mark Scott’s term, so both logic and the dictionary say there are no “rivals” in that space with which to compete. Yet compete it most certainly does: The commercial and cable channels peddle plenty of get-yer-your-gear-off soaps; the ABC responds with Crownies (“Sex, Lies and Magistrates”) and twentysomethings shagging the legal briefs off each other.  The commercial and cable outfits dot their schedules with thicker-than-a-rock quiz shows; the ABC fires back with Randling, which made dumb masonry seem intelligent by comparison. Channel 10 serves up The Project, replete with a giggle of blonde eye candy and the usual suspect opinionators’ attempts at humour; the ABC quite deliberately “headhunts” its own blonde airhead and sets out to remake 7.30 in the same mould.

“Market failure”, good grief! Only in the sense that the ABC has adopted as its inspiration and business model the commercials’ failure to produce so little of lasting worth.

Holmes makes that point in today’s sermon from the pulpit Fairfax has given him, writing that, “the ABC has explained that it’s looking for ways to attract a younger audience to 7.30.” The same “younger audience”, in other words, adequately served, more or less, by the commercials. What he might have written, had he been able to look through something other than the distorted prism of his own indulged career at the ABC, would have read something like this: “The ABC must explain that it cares not a jot about ratings and eyeballs, that it is there to provide the quality and insight which commercial rivals cannot and will not provide. The ABC’s goal should be to make virtue its own reward. Pretty simple, eh?”

Alas, Holmes remains blind to the evidence of his beloved broadcaster’s failures, which no doubt means that Fairfax will host more of his entirely predictable defences of the ABC’s incestuous culture, rather than pleas that it resume its former and culpably neglected mission.

Still, if that shtick ever grows tiresome, he might find fresh inspiration closer to his new home.  How is it, he might ask, that Fairfax’s editorial wit and imagination has shrunk so much that the best its editors can find by way of fresh voices are those arguing on behalf of its greatest rival? Who knows, Annabel Crabb might even wish to share the byline.

How To Be an ‘Economics Editor’

The Arrogant and Inviolate ABC