I recently came across a photograph of myself, a good many years younger, sitting behind the wheel of a yellow postwar Austin convertible, the mudguard punctured with a line of bullet holes. The car had been lent to me by Captain Harry Howden (right), former captain of HMAS Hobart, only survivor of Australia’s three modern cruisers in World War II.

Hobart had been the last ship out of Singapore as the Japanese stormed in. Howden, noticing the car abandoned on the docks, cocked a snoot at the enemy by stopping while it, and the British crest from over the dockyard gates, were hoisted onboard. Hobart’s quarter-deck 6-inch gun-turret cleared it with an inch to spare. Hobart and the Japanese infantry swarming in were dueling with machine-guns as the car was loaded and Hobart steamed out of the shattered harbor, ensigns flying.

Those who knew Harry Howden during his retirement might have been surprised to learn of this quietly spoken, self-effacing man’s heroic and romantic past. There were a few hints: the casings of sea-mines in the garden of “The Quarterdeck,” his home by the Swan River, furnished like a museum with wonderful naval memorabilia, his walking-stick made from a battleship’s boiler tube, the famous car, acquired as “abandoned property,” and his practice of buying old Montague whalers (27-foot ship’s boats powered by oars and sails) from the Navy when they became redundant and presenting them to sea scout units.

As the captain of a gunboat on the China Station before the war he had charged up the Yangtze to rescue missionaries kidnapped by communist bandits. A navigational nightmare, constantly shifting in its bed, British naval practice was to tie up or anchor at night. However, Howden knew speed was essential if the missionaries were to be rescued before they could be moved inland, out of reach of the British Navy. He went at full speed, day and night, with men in the bows sounding the depth of water with bamboo rods. The rescue was successful and his daring won commendation from the Admiral commanding the Yangtze station.

Australia entered World War II with six cruisers, three of them — Sydney, Perth, and Hobart, modern improved Leander-class. The other were older.

Sydney was fated to be sunk with all hands after falling in with a German raider, and Perth was sunk soon afterwards when, with the USS Houston, it encountered a powerful Japanese fleet in Sunda Strait. The surviving members of its crew were made prisoner, and few of them lived through Japanese captivity. The “lucky” Hobart very nearly shared her sisters’ fate. 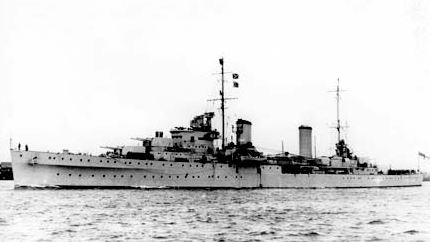 During the first part of World War II, Hobart (above) was in the Indian Ocean and Mediterranean under constant air-attacks. Howden, with an uncanny ability to spot and predict the fall of bombs, steered the ship between the bomb-bursts himself, ordering his crew to lie flat on the deck. At night he slept on a stretcher on the bridge. When the vastly outnumbered and ill-equipped British forces were being evacuated in the face of a massive Italian invasion of Somaliland, Howden, in the Hornblower tradition, landed a gun and crew from Hobart to give them some artillery cover.

Hobart became known as “The Flaming Onion” for the fierceness of its anti-aircraft fire and won eight battle honors in the course of the war. Because of fuel shortages it missed the ill-fated Battle of the Java Sea, in whose aftermath Perth was lost.

Hobart was also very nearly sunk in the Pacific in 1943, but was saved by brilliant seamanship and damage control. It was hit by what was possibly a Japanese “Long Lance” oxygen torpedo, such had wreaked havoc on the allied ships in the Java Sea. These torpedoes were far superior to anything in any other navy: they had several times the range of conventional torpedoes, left no betraying wake of bubbles, and had a much bigger warhead than the standard 21 inches (we may be grateful that the Japanese high command was too selfish or paranoid to give the secret of the Long Lance to their German allies).

Quite apart from the loss of life, the sinking of all three of Australia’s modern cruisers (plus the older heavy cruiser HMAS Canberra, sunk about the same time at Savo Island in the Solomons) might have had a calamitous effect on national morale. Mr. W. Wreford, a wartime officer serving on the Hobart when she was torpedoed. He was below in a cabin aft and narrowly escaped being killed in the blast. He told me: 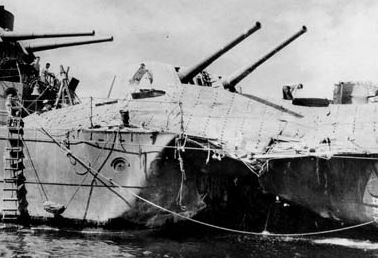 “Hobart was torpedoed at 1845 hours on the night of 20 July, 1943, port side aft, in a position about 100 miles due west of the New Hebrides. The torpedo hit obliquely, going aft so the main blast was directed, fortunately, away from the after 6-inch magazine. Had that been in the direct line of fire there would not have been anything left, material or human. Casualties were pretty light. Had it happened an hour later, there would have been 200 men in the vicinity and a vastly different story would have unfolded…”

The stern was virtually blown off, as were the two port-side propellers. The aftermost 6-inch turret was twisted and torn out of the deck. An anchor-chain was passed round the stern to hold it on. Mr. Wreford continued:

“We limped into Espiritu Santo where the U.S. Navy had a big base and were temporarily repaired by the USS Vestal…

“Being under Navy discipline her team did a very good job on us, under-water cutting and welding, so that we were able to make about 10 knots back to Sydney after about a six-week stay. We arrived at Sydney and went straight into dock at Cockatoo. And then the scum — the Australian dockyard workers — moved aboard.

“We had failed to locate one cordite charge in the badly twisted and buckled ammunition hoist serving ‘Y’ turret. Lot numbers of cordite records are essential, so we knew what was missing, not having fired any six-inch shells since well before we were torpedoed. So signs were well displayed: “No Naked Lights,” “No Oxy Torches,” “Unlocated Ammunition” etc.

“Well, down comes some snoozer not well versed in the King’s English and he did find the cordite. He was badly burned and we heard later died. All hands walked off the job. Negotiations continued for some days (I had left the ship by then) and subsequently work was resumed at a ‘danger loading’ — there was NO danger anymore! — of 7 shillings per hour. An Able Seaman’s pay rate, at the time, was 8 shillings per day. And that loading remained for the entire refit, which lasted about 18 months: the work-rate was in stark contrast to the USN’s example at Santo.”

Hobart did not in fact re-enter service until early 1945, in time to take part in several major landings in the islands. Hobart was placed in reserve in 1947 and for many years postwar was tied up in the naval “graveyard” of obsolete warships at Athol Bite in Sydney Harbor, its great gray hull dwarfing the corvettes also moored there.

Howden demanded high standards from his crew. When a leading seaman forgot to remove the safety-catch from his gun, Howden rebuked him and finished by addressing him by his new rank of Able Seaman — he had been demoted on the spot. However, Howden was deeply admired by his crews, and there was some resentment among them that he was never promoted to flag rank.

He had a big brass naval crest welded to the front of the famous car, and naval badges sewn onto the canvas seat-covers and roof. When being chauffeured he gave the driver naval helm and rudder orders.

Howden traveled to Sydney in 1962 for a last sad farewell to Hobart before she was towed away for scrapping in Japan.

When I was a teenager he lent me the precious car for several months while he was traveling. A later act of trust by him had an unhappy ending: in another overseas trip he lent The Quarterdeck to a group of students. He died in London never knowing its treasures had been vandalized and ruined.

Some Still Care About the Constitution

Not Merely Wrong but 265 Times Wrong