Echoes of Another Ukraine Massacre

The rippling wheatfields into which Malaysia’s airliner and its human cargo fell invoke a greater tragedy – the Holomodor of 82 years ago. Holomodor, the “extermination by hunger” inflicted on Ukraine by Josef Stalin over nine months in 1932-33, was an early genocide that locals still compare with the Holocaust. As a rural tragedy it was a smaller version of Mao’s enforced famine that took twenty million and thirty million Chinese lives.

Academic battles have raged; academic reputations have been won or lost over the extent of the tragedy, but largely the world has forgotten the immense suffering of the Ukraine people inflicted by the Stalinist regime in its campaign to suppress Ukrainian independence and extend Russia’s boundaries.

Estimates vary but the death toll inflicted was somewhere between eight and twelve million people. Largely Moscow succeeded in persuading the world that it was a natural disaster, due to drought and crop failures. But local depositions attest how the Russians confiscated all agricultural implements, destroyed next season’s seed and prohibited harvesting so that the wheatfields withered and rotted.

The scandal was covered up by star-struck western visitors anxious not to damage the exciting new political system in Moscow. Chief among them was the U.S. ambassador to the USSR, Joseph Davies (1936-37) who visited Ukraine and wrote reports to Washington minimising the deaths and excusing them as due simply to crop failures.

Today the West is searching for new truths in those same wheatfields. Again, the agents of Moscow seek to contaminate the evidence and lay blame elsewhere. In Australia, as most attention has been on the plight of the victims and their families, and diplomatic efforts to obtain access to the wreckage, little has been reported about the technical work that will determine what happened. But in the rest of the world, people have been busy.

The Flight Data Recorder (FDR) and Cockpit Voice Recorder (CVR) are unlikely to be much help. It will be surprising if the CVR yields anything but a shout or an obscenity, so quickly would disaster have come. Rather, what’s on the ground is important, in the eight separate debris fields. Most have never been explored by television reporters, who did their pieces to camera near the biggest pieces of wreckage.

But already clues are emerging from some of the lesser debris fields, ignored by the looters but invaluable for what they are revealing. Here, for example, is a New York Times photograph of a panel peppered with shrapnel which tells its story of the missile’s impact. 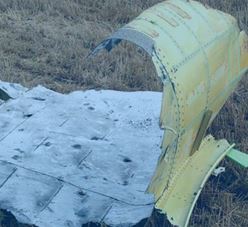 What the picture demonstrates is that the shrapnel came from outside the plane, consistent with the fragmentation of the proximity warhead of a SA-11 surface to air missile.

A SA-11 missile is not designed to strike the aircraft but to explode close to it. Like the spread of shot from a shotgun, the high-velocity shrapnel from the warhead can wreck an engine, slice cables and hydraulics, rip away panels and kill crew or passengers instantly.  At its normal cruising speed of around 850kms/hour, the damaged plane would then have torn itself apart.

The task for the inspectors on the ground will be to recover and rebuild as much of the plane as possible to reconstruct just how and where the initial damage was inflicted.  Normally this is done in a large hanger or warehouse. The pieces of aircraft are identified, assembled and laid out in place. If necessary, an armature or framework is built in the exact proportions of the fuselage, and the pieces of aluminium skin of the plane attached where they once belonged.

In this accident, where a missile is suspected, it will be important to rake the debris fields to search for pieces of shrapnel that did the damage. From them, it should be possible to positively identify the warhead from which they came, and the missile system itself.  None of this forensic work will  prove who fired the missile, or why. That is why the political promises to bring the culprits to justice will never be fulfilled.

Soon, it is hoped, there will be much activity at the crash sites, in a determined search for truth. One day, the wheat will grow over these places again, as it did after the other tragedy, the Holomodor eighty years ago.

Geoffrey Luck, a pilot, was an ABC journalist from 1950 until 1976. He has written of aviation matters for Quadrant Online, in a piece that recaleed how a combination of inexperience and power lines very nearly cost him his life

Demons in need of tackling