After World War Two, Japanese living in other parts of Asia were repatriated to their homeland and the country’s population jumped from 72 million to 78 million, straining resources during the post-war reconstruction.  Japan enthusiastically adopted family planning as a result and a population crisis was averted.  The country’s population kept growing though, to a peak of 128 million in 2011.  Later this century it might shrink to 70 million which is the level the country can support from its own agriculture.  In the meantime, the Japanese Government tries to keep the jobless rate low with make-work schemes that mostly involve concreting the countryside, with 6% of GDP currently devoted to that task.

Across the East China Sea, China’s population kept rising fast through the 1950s, up to Great Leap Forward, which killed 30 million to 45 million.  To head off the population increase, the one-child policy was first suggested by Professor Ma Yinchu, President of Peking University, in 1957.  Mao didn’t like the idea because he thought that history belonged to “the big battalions”.  Professor Ma was dismissed from public office and not rehabilitated until 1979.  Despite the one-child policy then enacted, China’s population grew from 975 million in 1979 to the current 1,364 billion.  Sheer demographic momentum is expected to take it to a peak 100 million higher around 2030.

China is one of the few countries taking food security seriously.  Official policy is that the grain necessary to keep China’s population fed should be grown within its borders.  Beijing maintains a grain reserve of 200 million to 300 million tonnes, although its exact size is a state secret.  Though meat is considered to be an indulgence, a strategic reserve of frozen pork and live animals is maintained.  China’s economic expansion of the last 15 years has allowed a big expansion in pork production, based on imported soybeans.  As this graph shows, the Middle Kingdom has turned into a giant vacuum cleaner for the world’s soybeans: 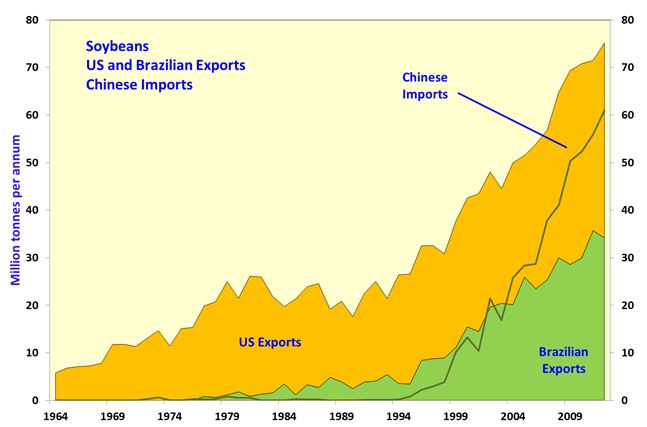 China now imports a third of world soybean production.  Processed through pigs, these imports provide 20% of the nation’s minimum protein requirement.  China has taken other steps to improve its food security, including leasing 5% of the Ukraine.  Efforts at securing food production in Africa and South America have been less successful due to culture clashes with the locals.

China can feed itself at the moment.  But that achievement has to be looked at in the context that the world is currently enjoying the most benign conditions for agriculture for over 800 years.  If the world cools in response to lower solar activity, a possibility I canvas in my book Twilight of Abundance, there is good reason to fear that monsoons won’t penetrate as far north or as far inland.  China is the world’s biggest grain producer, with 475 million tonnes per annum.  A drought in the north could easily reduce that figure by 150 million tonnes. Should we see lower global temperatures and reduced growing seasons elsewhere on the planet, it will be hard for China to make good the shortfall with imported grain. This is part of Mao’s legacy – he left China with a demographic time bomb that has a good chance of taking down the country if/as the climate deteriorates.  The Chinese people will endure, but the Chinese government may fall as a consequence.

Besides food security, there is another aspect to China that suggests it is more of a paper tiger, rather than fulfilling the common perception of inevitable further growth in strength and influence.  This analysis is based on a Hubbert linearization of Chinese monthly steel production data.  King Hubbert was a Shell Oil geologist in Houston in the 1950s who applied the ideas of a 19th century Belgian mathematician to the rate of extraction of a finite resource.  It works for specific oilfields — and it may work for Chinese steel production if that is taken to reflect the ability to create credit and, thus, the size of China’s current credit bubble.  Chinese steel production has risen from 10 million tonnes per month in 2000 to the current 70 million tonnes per month.  If we use the data in a logistic-decline plot, the data since 2006 plots as a straight line suggesting that it is reflecting depletion of a finite resource (credit, not iron ore): 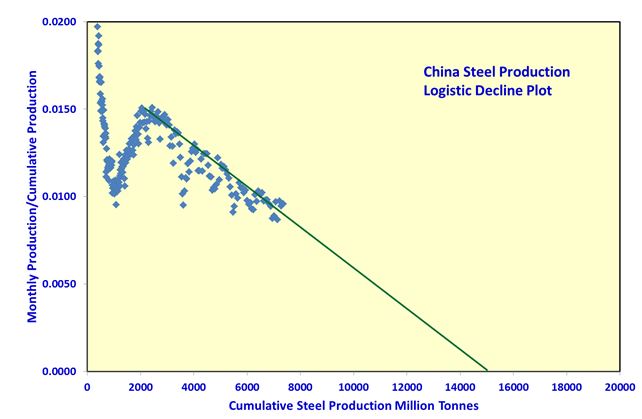 Of course Chinese steel production won’t fall away to nothing.  There will be a level of inherent demand from the economy which may be of the order of 200 million to 300 million tonnes per annum.  In the interim, China’s monthly steel statistics will be followed closely by economic analysts and geostrategists.  The data to date suggests that we are at “Peak China”, just as 1990 was Japan’s peak year following its credit bubble of the 1980s.

Stop The Boats. Infuriate The ABC

May Day in Paradise