The Soaring Cost Of Credentialism

Of course nurses should not be saddled with HECS debts. Nurses shouldn’t be going to university in the first place.

There was a time when nurses learnt their craft in hospitals as trainee nurses.  They were paid for learning on the job, and they learnt what the job was about.  That changed in the early 1980s, when nursing educators wanted more respect and more money.  Nursing became a university course so the educators could be called professors and paid as such.  Graduates in nursing (and clutching their new degrees) have a much higher rate of leaving nursing than those who learnt on the job under the old system.  So the net result is that many young women are wasting years of their lives and running up HECS debts to find that nursing doesn’t suit them.  Those wasted lives are a small price to pay so that a few older nurses get to be called “Professor of Nursing”.

Academic positions in nursing are one small part of tertiary education’s parasitic growth, which started with Whitlam.  That expansion, however, might give Australia the perverse potential for greatness.  Study a pair of civilisations — the British and the Chinese, both of which have achieved greatness at some stage —  shows that each had at least two things in common: highly competitive civil service entrance examinations and the dissolution of their monasteries.  The British did their dissolution of the monasteries under Henry VIII, starting in 1536.  The Chinese had theirs a few hundred years earlier, in 845, under Emperor Wuzong of the Tang Dynasty.  Can Australia achieve greatness without having a dissolution of the monasteries?  We don’t have that many monasteries in the first place.  But we have a super-abundance of much the same thing – universities and other tertiary institutes, which are all too often places of sanctuarys for those who shy from genuinely productive employment.

Our economy and society have acquired a host of other parasitic structures quite apart from the tertiary education sector.  In agriculture, sucking the blood of the grain-growers is an entity entitled the Grains Research & Development Corporation (GRDC). Grain-growers currently pay 1% of their revenue to this corporation, which has run up a $250 million-odd cash surplus. The GRDC is supposed to conduct research to benefit grain-growers.  Yields have plateaued for the last fourteen years though.  Grain-growing is a low-margin business and that 1% levy averages out at about 20% of net profit, so farms will be worth 20% more when it is removed.

Wool growers have it a bit harder – 2% of revenue as a levy to Australian Wool Innovation Limited.  The funds raised are spent on marketing, ineffectually it would mostly seem.  Livestock producers don’t escape.  They pay a levy per head to Meat & Livestock Australia which equates to about 2% of revenue.  The simple act of scuttling these three entities will make agriculture in Australia worth 20% to 30% more than it is now.

And the parasites just keep latching on.  In oil exploration in WA, an environmental management plan for an exploration well once cost around $5,000 for a typical desk-top study. Following the passage of a new act in 2012, environmental consultants have demanded that oil companies pay for a botanist and a zoologist to walk the route of any new road to a wellsite.  Costs are up more than twentyfold.  The industry groans and then can’t take it anymore.  Health Safety and environment cost associated with the Gorgon LNG Project on Barrow Island reportedly represent more than 5% of capital costs.  And the WA State Government wonders why the industry is moving to floating LNG production vessels.

The public pays for all these parasitic arrangements, either directly in the case of food prices or indirectly due to lower economic activity.  All taxes lower economic activity, and these blood-sucking arrangements are taxes by another name. On the subject of taxes, the Abbott government has eschewed serious belt-tightening in its budget, in forming the 2014 budget, instead kicking the can down the road.  But a high proportion of tax revenue wasn’t there not so long ago, as shown by this figure: 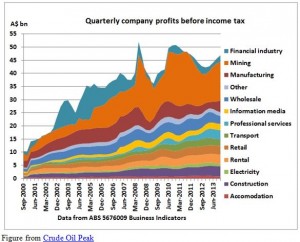 Mining income has grown dramatically but could shrink back to where it came from, especially given that Australia’s No 1 trading partner, China, is making bellicose threats to our No 2 trading partner, Japan.

One of the amusing things that the previous Federal Government used to say is that Australia would inspire other countries to follow our lead if we were to sign international carbon-tax treaties.  But even as they were uttering such green pieties, one of the concords Kevin Rudd and Julia Gillard chose to ignore was the International Energy Agency Treaty of 1974, which requires member countries to maintain stocks equivalent to 90 days of net imports.  Given the closure of most of our refineries (and the fact that the remaining ones aren’t suited to Australian crude), meeting the treaty requirement would require stocks of 90 million barrels of petrol, diesel and aviation fuel at a cost of $10 billion or so.  One of the things that Prime Minister Keating used to say is that Australia should learn from Asia — and an Asian nation we could be learning from right now is China, frantically stockpiling oil at the rate of 1.4 million barrels per day.  Perhaps China is simply being prudent, or perhaps that frantic rate of stockpiling is a sign that war is imminent under Beijing’s timetable.  Won’t it be fun finding out, whichever it is!

China has another lesson for us.  While Canberra prattles on about climate change and the government wants to spend $1.5 billion on direct action, China now uses half of all the coal burnt in the world — 4,000 million tonnes per annum.  And just as a US naval officer said recently that “the Chinese spend 90% of their time thinking up new and inventive ways to sink our ships and shoot down our planes”, they also think up new ways to burn coal.  They are constructing a fleet of plants to produce synthetic natural gas from coal.  Being a post-modern publication, Scientific American doesn’t tell you how much coal those plants will consume.  You have to calculate that from the carbon dioxide production figure, which is considered to be much more important.  And the result is 400 million tonnes per annum, much the same as Australia produces now.  Synthetic natural gas they produce themselves is LNG that Australia or anyone else won’t be selling them.

Troubled waters ahead, but surely we are in safe hands?  No, and perhaps this is the worst news of all.  A little Indonesian volcano erupted near Bali on May 30 and Darwin airport was closed in response, despite the fact that it was 1,000 km away.  Transport Minister Warren Truss speculated that Brisbane airport might need to close due to the threat from volcanic dust.  Our best and brightest, who we elect to govern us, react like hysterical schoolgirls.  These people can’t have played outside as children.  It seems they have no understanding of natural phenomena, including the way things are diluted with distance, volcanic smoke and dust among them. Nor are they interested that the Indonesians, Filipinos and Japanese fly around erupting volcanoes with no ill effects.

There is no point in beating about the bush.  The people who closed Darwin airport, from the Transport Minister down, are really, really stupid.  That episode is indicative of the way the whole country is run.  Be afraid, be very afraid.

David Archibald, a Visiting Fellow at the Institute of World Politics in Washington, D.C., is the author of  Twilight of Abundance: Why Life in the 21st Century Will Be Nasty, Brutish, and Short (Regnery, 2014)

When Did The Left Renounce Liberty?

The Political Euthanasing of Tony Abbott