Anne Henderson will discuss her exciting and illuminating new book, Menzies at War, at the next Quadrant dinner on Wednesday, July 9, at the Union, University and Schools Club, Sydney. 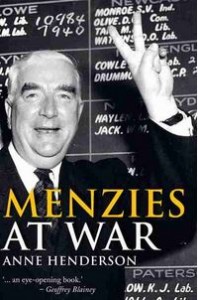 “On the 75th anniversary of the start of World War II, Anne Henderson’s work is a significant addition to Australia’s understanding of a crucial period in our history and the contribution of our greatest national leader.” – Prime Minister Tony Abbott

“Anne Henderson’s excellent and fascinating book, Menzies at War … does justice to the complex story of Menzies’s achievements in the darkest part of the war, which were in fact heroic. When the war broke out, Menzies had been Prime Minister only a few weeks. He was suddenly charged with leading in total war a country almost completely disarmed by a succession of caitiff governments which had not merely neglected, but in the case of some Labor politicians actually despised, their duty to defend their people.”  — Hal Colebatch, Quadrant, July-August 2014

Anne Henderson is deputy director of the Sydney Institute, which she has operated with her husband, Gerard Henderson, since 1989. She is the author of eight other books including a biography of Enid Lyons and Joseph Lyons: the People’s Prime Minister

From Ragged Centre to Flush Left