During the 2012 presidential debates, Obama scorned Mitt Romney for having identified Russia as one of America’s geo-political adversaries: “The 1980s are now calling to ask for their foreign policy back, because the Cold War’s been over for 20 years.” Obama used to be a funny man, or at least the guy who wrote his one-liners was funny. But the joke is over and America needs a new Ronald Reagan more urgently than ever.

Reagan’s resolve in the 1980s to station Cruise and Pershing II missiles in the Federal Republic of Germany put paid to Brezhnev’s SS-20 prospective game-changer. A few years later Mikhail Gorbachev was signing off on the Intermediate-Range Nuclear Forces Treaty (INF Treaty), all but conceding defeat in the Cold War. That’s how fast things can move when you have the absolutely right – or totally wrong – person pulling the levers of power.

There is the temptation to argue that if only Obama possessed a bit more spine then, just maybe, Putin would be more circumspect about Crimea (plus everywhere else), let alone risk a Second Cold War with the USA. And yet that is not the real problem. Carter was a weak and vacillating leader but he did perform something of a foreign policy U-turn in 1979 after the Soviet Union invaded Afghanistan. There has been nothing weak or vacillating about the current President’s faith in the progressive-utopian internationalism. A foreign policy U-turn on the part of Obama will require him dumping a lifetime of post-modern, post-colonial, post-reality academic baggage.

Leftist sophisticates never understood Russia. Standard academic orthodoxy – which informs everything about the 44th President – blames poor old Harry Truman for starting the Cold War. The warmonger Eisenhower torpedoed Nikita Khrushchev’s proposals for peaceful co-existence, or so goes the leftist fantasy. Moreover, JFK grew wise to the military-industrial complex but the shadowy figures running America assassinated him Dallas before he could bring down the curtain on the Cold War. And Reagan, so say the progressives, did not destroy the Soviet Union but nearly destroyed the planet with his right-wing ravings about evil empires. 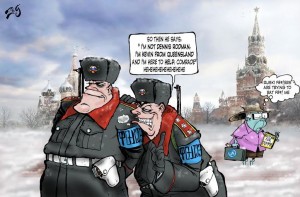 Carter was like a watered-down version of a normal American president, but Obama represents an altogether different kind of leader – the USA’s first post-American president. Obama was not being intentionally weak and vacillating when he pledged in February 2009 to “reset” relations with Russia. Nor when he sought favour with Vladimir Putin through betraying the defence interests of the Czech Republic and Poland by abruptly abandoning plans for a European missile defence shield in September 2009. Not even when he assured Dmitri Medvedev in 2012 that he would “have more flexibility” to work with Putin if he were re-elected in November that year was he being weak and vacillating. Obama – if only we were smart enough to realise – was playing a bigger game, because what drives this president is a one-world-one-people creed. Somewhere along the line the advocates of progressivism convinced him that a radical version of internationalism was the key to world peace. Unlike his narrow-minded, straightjacketed, dangerously patriotic, military mad, small-picture, parochial and bigoted forerunners in the Oval Office, Obama had seen the Promised Land. (click on Zeg’s cartoon to be reminded of a currently unemployed former PM’s irrepressible yen for the limelight.)

On the eve of Putin’s awfully big adventure in the Crimea, Obama’s Defense Secretary was cheerfully proposing deeply debilitating cuts to his nation’s defence budget. America’s post-war geo-political reach, according to the progressive school of thought, has constituted a net loss for the world. Time to put an end to American exceptionalism and usher in the era of a truly multi-polar world. For leftists, at least, it’s a win-win situation. Less military spending makes the word a safer and more harmonious place, while leaving extra money in the federal coffers to pay for ObamaCare and the Supplemental Nutrition Assistance Program (formally known as food stamps). This is why Barack Obama was the one Americans had been waiting for.

The unsolicited appearance of Russia’s army – sorry, “local self-defence forces” – in Crimea this past week has caused more than a few people to worry about what a post-American world has in store for us, but the effect might not be lasting. Nobody doubts that the relationship between Russia and the Ukraine is complex one, but how did the West get Putin so wrong? Obama might have got Putin wrong more than anyone else, but he was not the first to misapprehend the former KGB colonel. Why no outcry when the guy was having Russian journalists bumped off? In her biography, The Man Without a Face: The Unlikely Rise of Vladimir Putin (2012), Masha Gessen estimates Putin’s personal fortune (by 2007) to be $40 billion. By Gessen’s account, Putin is a thug, murderer and vulgarian, and has transformed Russia “into a supersize model of the KGB”, the world’s first bona fide mafia state. Putin proved to be lucky when oil prices skyrocketed and has been playing on that good fortune ever since, using it as a none-too-subtle weapon – along with actual weapons – to threaten and bully all and sundry.

George W. Bush, to be fair, did little when Putin plundered two regions of Georgia towards the end of Bush’s second term in 2008. Still, not too many on the Left are going to censure the 43rd President of the USA for being a congenital appeaser. Bush and his predecessors at the White House might have overused or even, on occasion, underused American geo-political clout, but at least they had a sense of the big bad world out there. American military power was not only a useful thing for US interests, but also represented a net benefit for the world.

Putin now has Crimea. His talk about “Nazis” taking charge in Kiev would be less obscene if Russian propagandists had not used the same line about Prague in 1968. Time will tell if he goes ahead and filches other parts of eastern Ukraine for his born-again Russian Empire. Much will depend on Obama’s “flexibility”. The logic of history tells us that the more accommodating Obama is about Crimea, the more likely Putin (or a successor) will transgress again when the moment turns propitious.

The probable outcome, of course, is that Putin retains control of Crimea in all but name and Europe goes back to business-as-usual as quickly as possible. They need Russian gas, after all. The freedom-loving people of the Ukraine (and, for that matter, the world) will curse Obama’s name, but on the upside a second Nobel Peace Prize might in the air. Meanwhile, China’s air force has developed precision-guided cruise missiles, long-range bombers and drones, while the Chinese navy continues to develop its long-range strike potential. I am sure the secret society that rules China from the imperial enclave in Mao’s Zhongnanhai complex will have all the justification in the world when they annex the remainder of the Spratly Islands. What then of Taiwan’s future?

What then anybody’s future? Was Obama ever serious about preventing the Islamic Republic of Iran obtaining nuclear weapons capability? This week an Iranian general, Masoud Jazayeri, openly mocked the American president’s insistence that “all options are on the table”, suggesting that Obama’s much touted line is not taken seriously even by Iranian children. Jazayeri’s charge that Obama is a “low-IQ president” seems unlikely, and yet the claim that he is “far from reality” rings true. President Obama was supposed to be building a new understanding between America and its traditional foes and rivals, but his kowtowing to the world has been in vain. If only there had been a Geo-politics 101 course at one of the prestigious universities Young Barack (or Barry) attended, instead of all those post-modernist and post-colonial seminars. Obama might have learnt that earning the respect of foreign adversaries is what prevents wars, rather than high-sounding phrases about “healing the world”.

President Obama is not so much the leader of the Free World as the gift to the unfree world that keeps giving. He makes Jimmy Carter look like Winston Churchill.

No Cigar for the Treasurer

The song remains the same at Their ABC