A Promise Abbott Should Break

Today’s media predicts the announcement of a Royal Commission which will cover union corruption and corporate contributions to the “corrupt” unions. We should hope that either the terms of reference are broader than that, and/or that the announcement indicates the government intends major reform of the Fair Work legislation and administration before the next election. 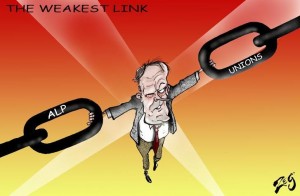 Even though considerable evidence of union corruption is already available this is unlikely. The government will  want to use the Royal Commission to justify subsequent major reform, and despite belated revelations by businesses of the legislation’s disastrous consequences — Boral CEO Mike Kane’s brave column in today’s Fairfax press, for example — it will not want to break its pre-election promise to implement no major changes during this current term. As the analysis in today’s Australian by Henry Ergas suggests, this would be unfortunate. He perceptively points out that the underlying problem is with the legislation and its administrators:

“Yet the case for reforming Labor’s industrial relations laws goes well beyond the gangrene it has caused. For the rot is only the most extreme symptom of the laws’ underlying flaws. At the heart of those flaws is what the industrial relations system seeks to do. It should serve to improve the functioning of the labour market by facilitating efficient contracting between employers and employees, thereby promoting trust and confidence in the workplace and encouraging the creation of secure, high-quality jobs.

Instead, under the guise of fairness, Gillard’s legislation aimed at replacing market contracting by an administrative process, in which mandatory standards, awards and collective agreements would be the primary means for determining the conditions of employment. And with that legislation guaranteeing the unions a privileged role in framing each of those instruments, she sought to entrench a degree of union power entirely unrelated to the unions’ ability to attract and retain members. In those objectives Gillard’s legislation succeeded all too well.”

The legislation also has succeeded in forcing “big business” to do deals with unions. While supporters of small business (and others) are right to criticise the apparent extent of concessions made by “big business”, many overlook the adverse effects of the legislation (and its administration) on the management of those major companies.

Simply put, big business would encounter great difficulty sustaining a competitive position if not for ‘going along to get along’. It is incumbent on the Abbott government to restore industrial relations to an above-board footing.

Des Moore, a former Deputy Secretary of Treasury, is director of the Institute for Private Enterprise

All the news that’s fit to ignore