Journalism? Not At Their ABC

The discovery by the ABC’s Jakarta correspondent, George Roberts, of video footage of failed asylum-seekers with burns on their hands, accompanied by allegations that these injuries were deliberately inflicted by Australian Navy personnel, has touched off a furious round of accusation and denial. Some of the criticism has been directed at the ABC (one angry letter-writer asking: ‘Whose side are you on?”) and some at Roberts for taking the story at face value.

That last charge is certainly one that should stick.  It appeared that the excitement of obtaining ‘exclusive’ footage of injuries, coupled with claims which, if true, would seriously damage the reputation of the Navy and perhaps the future of Operation Sovereign Borders, led to an incautious rush to judgement at the very least.

Reporting from Indonesia is an unglamorous job in a difficult country, and a reporter carries an onerous burden in these awkward times. However Roberts has form when it comes to simply putting to air what he is told without thought for the consequences for himself, the ABC and Australia. This is a little matter I took up a year ago and the record of my correspondence with the ABC regarding the deficiencies I perceived in Roberts’ methods may throw some light on his approach to reporting.

On April 13, 2013,  a brand-new LionAir Boeing 737-800 fell in the sea 1.1 kms short of the runway at Bali’s Ngurah Rai International Airport, Denpasar.  The aircraft (below) broke in two; 46 passengers were injured, four seriously. The accident was well reported at the time, including references to LionAir’s extremely poor safety record. 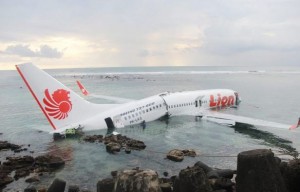 On its 8am bulletin on Radio National on April 16, the ABC broadcast a voice report by George Roberts quoting at some length local ‘airline analyst’ Mr Gerry Soejatman. Beneath the main headline on the audio archived at Radio National’s website, “Wind may have caused Bali air crash”, there is a sub-headline that baldly asserts the existence of “mounting evidence that the spectacular weekend plane crash in Bali appears to have been caused by a huge gust of wind that blew the plane into the sea.”

I interpreted the comments of Soejatman as an apologia for LionAir — an unwarranted attempt to assign meteorological conditions as the cause, plus an irrelevant and inappropriate comparison with Qantas, which Soejatman said had “just been lucky.”  This was my considered complaint to ABC Audience and Consumer Affairs:

Djakarta correspondent George Roberts and ABC News were grossly irresponsible to broadcast the suppositions of the so-called Indonesian aviation specialist this morning on the cause of the Lionair 737-800 crash at Denpasar. It was made even worse by the gratuitous comment, thrown in at the end, that Qantas had just been lucky.

The facts which were already available from reliable aviation sources searchable on Google are that the aircraft, when still one nautical mile from the threshhold of the runway, was 100 feet below the 3 degree glideslope and descending at 700 feet per minute. If that approach angle and rate of descent had been maintained, the plane would have landed in the water, as it did. The pilot’s first reported comment was that he tried to apply power but the aircraft was “sucked from the sky.” Whether windshear, a microburst or pilot error was responsible for the accident is for the investigators to determine. However it does appear that even if meteorological events had a part to play, the aircraft was already in a vulnerable position and a power correction was necessary.

The expert’s other comment about unfairness in reporting Lionair’s safety record by the media was also obvious bias and special pleading. Lionair’s bad record, resulting in its ban from European skies, has been well and correctly reported without implying that the poor servicing responsible for the ban had any part to play in the crash of a brand-new aircraft, two weeks into service.

This broadcast is surely an example of the care ABC News needs to take not to push other people’s barrows – however innocently it might have been done in the course of following up a story.

On May 3rd, I received this reply from Michael Carey, International Editor:

I asked our Jakarta correspondent to respond to your criticism of his reports. This is a summary of his response:

Gerry Soejatman is a respected airline analyst with no known affiliations.

He had assessed the evidence and weather patterns of the day and there was photo and meteorological evidence of a down burst in front of the run way over the ocean. The pilot who landed before this plane also told him that their “arse” was in trouble coming in to land.

Obviously it’s hard to explain the whole picture in a radio story but given (the ABC) had reported Lion’s safety record over the weekend, it was fair and balanced to allow an expert opinion that the company was unfairly criticised for being to blame.

It is worth emphasising that we are talking about two radio news stories within days of coverage, most of which was damning of the airline’s records. Later in the day, PM ran this story which was very critical

I  considered that a condescending brush-off and replied the same day:

Thank you for looking into my complaint about this story. I have the greatest respect for the Jakarta correspondent, but on this occasion his judgement failed him. On airline/aircraft accidents the one thing a reporter should avoid is giving air to opinions as to cause immediately after the incident – particularly whether they blame or excuse the crew.

In this case, the record of LionAir was not immediately relevant: the plane was brand new, two weeks in service and the pilot had 10,000 hours experience. However it seems that he was not familiar with flying into that strip in that type of aircraft.

Agency reports quickly referred to windshear/microburst as a possible cause. That was somebody’s guess, probably based on the comment from the preceding plane’s pilot. It is not possible to photograph windshear or a microburst, and the Bali strip was not equipped with LIDAR (Light Detecting and Ranging), the system to detect them.

However, simultaneously radar data was released to the public showing (as I said) that the aircraft was below glide slope, on a track which meant it could not make the threshold of the runway, and would end in the water. The pilot was immediately quoted as saying he applied power to correct this, but his speed was already too low for him to recover at that height. Whether meteorological conditions played a part will be determined, but a guess absolving the pilot should not have been advanced alone.

I found it disturbing that the correspondent would quote as consideration for using Soejatman’s opinion the idea that it should “balance” criticism of Lion’s safety record.  The fact that he thinks “it fair and balanced to allow an expert opinion that the company was unfairly criticised for being to blame” proves that Soejatman’s views were intended to excuse the pilot and the airline. The so-called “expert” might not be affiliated, but he was out to counter the bad press which Lion had (deservedly) earned with its past accidents.

As to the Qantas comment, this is a most unfortunate example of illogical and wrong-headed thinking – first by Soejatman, then by the correspondent. It’s a facile statement of the obvious to say there may be an element of luck in aircraft accidents. But more than 50% of them have always come down to pilot error. The point is that superior flying by Qantas pilots has prevented mishaps becoming catastrophes (QF32 380 over Indonesia; QF30 747 oxygen bottle explosion over the South China Sea), whereas inferior piloting by Indonesians of LionAir have cost many lives. The statement, I repeat, was gratuitous, irrelevant and should not have gone to air.

You may like to pass on to the correspondent the concern in the aviation industry is that Lion Air’s order of 20 new Airbus A320s and 20 new Boeing 737s is seen as an attempt to get political leverage to have the EU and FAA bans on the airline lifted.

Again, thank you for your trouble in responding.

I received no response. On May 16th I emailed Michael Carey again:

For those with an interest in aviation matters, it’s a clear example of poor CRM – Crew Resource Management – where there is inadequate or improper co-operation and co-ordination between the two pilots. That the PIC (Pilot in Command), who seems to have been an experienced captain, did not take control earlier from the junior PF (Pilot Flying) and called for a go-around just one second before the plane hit the water says everything about standards at a company like Lion Air. We need to await the final report, but apart from a rain squall affecting visibility, abnormal weather does not appear to have played the role originally reported.

That did elicit a reply:

I passed your previous email onto George Roberts who found it very interesting. I will do the same with this

So that’s all right then?  George has been brought up to date on things he might have been expected to find out for himself. But not a word of apology for his promotion of a propagandist defending a dangerously incompetent airline or for allowing his interviewee to slag off Qantas. This is symptomatic of the way the ABC defends its news service, and avoids answering critical questions.

A year later, history has repeated itself — this time with with a still-incurious Jakarta reporter accepting allegations and “evidence” without further enquiry.

Where is journalistic skepticism? Where is the curiosity? Not in the ABC’s Jakarta office.