What is the defining or great moral challenge of our time? Mr Rudd thought it was global warming. President Obama thinks it is growing inequality. Though, really, I’m splitting hairs here because I have no doubt that both would be prepared to concede the other’s ‘challenge’ as having comparable weight to their own.

When you think about a great defining or moral challenge it would be natural to assume the existence of a broad and resolute consensus. After all great challenges are not the stuff of dissention and vacillation. Think about the unanimity in meeting the great challenge of defeating the Axis powers during the Second World War or in combating deadly bacterial and viral infections.

The agenda of combating global warming is an affront because whenever conflicting evidence comes to light — the absence of warming since the end of the 1990s, the expansion of Antarctic ice, the recovery of Arctic ice – it triggers not reflection but retrofitting. The agenda of combating growing inequality is an affront because it wilfully disassociates the distribution of income and wealth from the process of generating income and wealth.

Being wrong about everything of importance is a tragedy of the left. This doesn’t matter too much when kept to university common rooms or to sanctimonious moralising over caffé lattes. Unfortunately, the global warming and inequality agendas have become mainstream among the political class. They threaten to impoverish us all.

Find a politician who is willing to stand up and say well I’m a climate change sceptic. Well I know you can find a few but they are a few. I particularly liked David Cameron’s reaction to the whole affair: his implied astonishment that the forced building of grossly inefficient wind and solar farms had forced up energy prices and threatened to freeze even more pensioners to death this winter than last. How can it be that it is still so cold, you can almost see him saying, as the water vapour in his breath condenses in London’s cold night air?

Speak to almost anyone. There is a complete lack of appreciation as to why we are prosperous beyond the dreams of our forbears. There have been a number of vital ingredients — the rule of law, property rights, the free market, invention, the energy and foresight of entrepreneurs, productive and hard working people, and cheap and plentiful energy. Take away any one of these ingredients and the whole edifice tumbles. 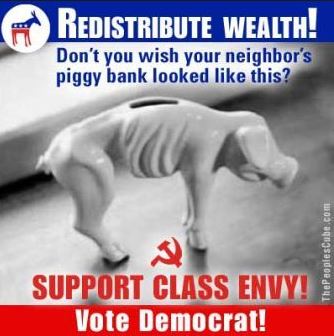 I was reading an article in the Asian edition of The Wall Street Journal (24-26 December) by New Jersey Governor (and mooted presidential aspirant) Chris Christie’s economic adviser Robert Grady. His conservative heart is in the right place; his brains aren’t. He rightly criticised President Obama’s speech (4 December) to the Centre for American Progress in which the US president again harped on about inequality – “the defining challenge of our time” etc, etc, ad nauseam.

The problem is that his criticism of Obama was based around the facts. He quoted a recent piece of research which showed that inequality had, in fact, narrowed; for example, over the period from 1993 to 2009, once account was taken of progressive taxation and transfer payments. This, quite simply, is fighting on left-wing turf. This is a message for conservatives: income and wealth inequality do not matter unless they are the result of corruption and cronyism. Then corruption and cronyism matter.

What matters is that we all become richer, not that some become much richer than others. The free market works to makes us all richer by attracting resources to where they can add most value. Resources, including people, are attracted by price. Often this means that some people are paid a lot. So be it. Interfere with that outcome enough and you bring down capitalism. We all become more equal to be sure; and all poorer to boot.

The distribution of income and wealth falls out of the process of producing income and wealth. It is not some independent variable that can be adjusted at the will of government. Obama and his ilk will never understand that. Conservatives should.

There was a small island community. They lived mainly on fish which they caught and cooked over open fires. They decided to specialise. Some fished the coastal waters while others fished further out in more dangerous waters. A lot more fish were caught and everyone had more fish to eat; though those fishing further out had more. One day a socialist-cum-green was born, grew up and became important. He complained that some people had more fish than others and that the fires were ruining the air. The fish were shared equally. No-one was willing anymore to fish further out and everybody had less. They used the sun to cook their fish. One cloudy day the fish was only half cooked and they all died of food poisoning. End of island.

The One Thing Trump Must Get Right