Quentin Bryce and the Lost Cause

Why did she do it? After all, her term ends in March. Since she was obviously itching to declare her support for same-sex marriage and a republic, why didn’t Quentin Bryce just say to the  ABC when they asked her to do the Boyer Lectures:  “Certainly, but may I  take a rain check on that until 2014?”

For the very first time, a Governor-General has descended into the political arena. Her remarks came not by way of some inadvertent throwaway line to a journalist but as a carefully considered intervention in the political process, immediately dividing the nation. Some  republicans and same-sex marriage enthusiasts were delighted. But those who appreciate the Westminster system,  whether  republican or monarchist, were disturbed.

Tony Abbott, who is trying to solve a major diplomatic crisis not of his making, quickly diffused the debate, hosing down the more outraged monarchists. But the damage had been done. Not to the institution, but, sadly, to the incumbent.

Worse, that  damage is retrospective. People  are saying to me, and more importantly on talkback and in the social media, “I never trusted her,” or worse. That’s a great pity because Bryce has made a genuine effort to fulfil the role with style, charm and understanding.

In the meantime, the small republican movement, and the large number of politicians who claim to be republicans, would be grasping at straws to think Bryce’s break with tradition and convention will in any way increase the chances of Australians changing their Constitution. The fact remains that any examination of polling since the 1999 referendum indicates a gradual decline in support for a republic, whose concept and proposed implementation remains vague and worryingly undefined.

There’s a bombshell in those figures. The same polling constantly indicates increasing disinterest in republican change among the young.  The recent ABC Compass survey is only the latest confirmation. The obvious and only conclusion is that the republican cause has taken a step back since the referendum of 14 years ago, when the No vote prevailed  in every state and 72% of electorates. 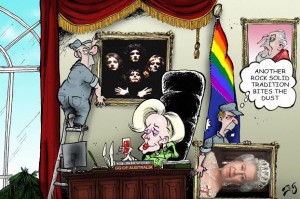 And no, John Howard didn’t rig the convention – the majority of delegates were republicans. Nor did he rig the ballot question. It was approved by both Houses, in which about two-thirds of the members were republicans. The fact of the matter is that it was the republican movement which tried  to rig the question, but that’s another issue.

Yet the clamour of a vocal minority refuses to abate. It’s as if a republic’s supporters were marching down the street and chanting, “We want a Republic…but we haven’t the foggiest idea what sort of Republic we want.” The reason, of course, is obvious. As soon as any republican model is proposed, opinion in the camp for change immediately fractures — some entertaining one vision and others opposed to it. That is why republicans tried to paper over this divide by with a single-question plebiscite: “Should Australia become a republic?”

Having been once rebuffed, republicans fear they would even lose another such plebiscite, however cleverly crafted. The proof of that came when Julia Gillard was forming a minority government in 2010. Passionate republican Bob Brown could have had anything,  even  persuading her to break a promise that she would neither introduce nor advocate a tax on carbon dioxide. Yet Brown didn’t ask for a referendum or a plebiscite. Why? The simple answer is that he  knew putting such a question to the electorate would be a  waste of time.

Disabused of the notion that voters would flock to their cause, some republicans are banking that a change of attitude will follow the end of Elizabeth II’s reign. Allow them to take comfort in wishful thinking, for there is no reason to believe the next monarch — Prince Charles, presumably — will alter the perception that constitutional change will actually improve the governance, rather than concentrate more power in politicians’ hands. Rather, we can expect  a massive media retrospective on what will be undoubtedly be dubbed “the Second Elizabethan Age”, plus massive interest and blanket coverage  of that unique ceremony, the Coronation.

Rather than our nine parliaments again wasting months and taxpayers’ money on the distraction of a republican change, Australians will be, as usual, much more interested in measuresto improve the governance of this country and making the politicians more accountable .

David Flint of Australians for Constitutional Monarchy  is the author with Jai Martinkovits of Give Us Back Our Country, published by Connor Court, 2013

John Howard and the media