Bill Shorten, a leader in the true Labor tradition

Having just sat through the last 24 hours, I can hardly do better than refer you to a blog post I produced just a few short months ago. Those who do not learn the lessons of history are destined to repeat them, so here we are again, folks.

But at last the lugubrious clown car has left the ring, crammed with the motley crew of red noses, bald heads, fright wigs and crossed eyes. The astonishingly unfunny cream pies have been thrown, the dismally long shoes have been tripped over, the bucketloads of shredded Australian dollars have been flung, and the wobbly trousers fallen down.

Backstage, they are all busily blaming each other for the failure of their well-worn act to draw even the slightest chuckle from anyone over the age of five. (Those under five have already made their views known via Twitter, eg. ‘So uncool that Abott got in I am SO moving to NZ once mum coms home tonite #kiddylefties #Abbott666’).

Chief Clown Rudd spent some hours tucked away in a little room before finally conceding. While it’s fun to speculate about what went on in there, what really counts is that the Chief Clown decided to drop his wobbly trousers one last time before falling on his cardboard sword, and bare his backside at opponent Bill Glasson. Bill Glasson is a man who has actually achieved something worthwhile in the real world, instead of attaching himself to the government teat as soon as possible like Chief Clown Rudd. Not to worry. We have the tape now of that nasty little peek into a nasty, narcissistic little soul, and that’s the most important thing. 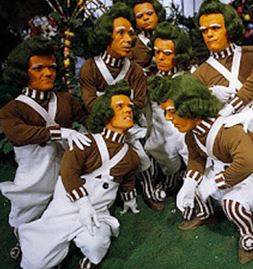 Chief Clown chief contender is well-known Oompa Loompa Bill Shorten (at left, Bill confers with senior ACTU colleagues at the most recent Congress). As one blogger has remarked elsewhere, “The Oompa Loompas are scary because they are child-sized, yet they are completely unsympathetic, look weird and act even weirder than they look.”

Bill Shorten must become ALP leader immediately, and stay there for the next three years. I say this only for the good of the country. Ever since the last Rudd leadership challenge, Bill has appeared (on television at least) to be hypnotised. He does not blink very often, and he speaks slowly and in a monotone. I’m even prepared to advance the theory that this is how Rudd got Shorten’s support. Did Rudd inherit Paul Keating’s ability to gesture hypnotically under the guise of Mandate the

Magician? (At left., Rudd uses his X-Ray Spex to mesmerise the entire nation, albeit less successfully.)

And yet Bill used to be a lively chap, with quite an eye for the ladies. It’s a shame the hypnosis removed his personality, as he now radiates all the charisma of an unpainted garden gnome. A greater contrast with the increasingly bouncy Tony Abbott cannot be imagined, which is why Shorten must immediately become ALP leader. He will give the party much-needed stability, and also, he will ensure that by being as unlike Tony Abbott as possible, voters have a real choice at the next election.

Thank you for listening.