I am becoming increasingly incensed at the demonisation of Indonesia’s people smugglers, who  are blamed for all those many  deaths at sea and Australia’s lost control of its borders. There is no doubt we are experiencing "a non-violent invasion", a term US conservative columnist Michelle Malkin used for the title of her book about  the flood of illegal Mexican immigrants coming across her country’s southern border.

However, the people smugglers are not the real culprits — no doubt among them there are crooks and exploiters, but have a look at the report of the NSW Independent Commission Against Corruption.  When it comes to crooks, who are we to cast the first stone?  No doubt the people smugglers use unseaworthy boats, but hey, they don’t have access to luxury yachts, and they have moved the majority of their clients to Australia via Christmas Island. They have mostly delivered their product. Future generations of the descendants of the refugees granted residence in Australia might well think of the people smugglers as the Scarlet Pimpernels of our time.

Most of the people smugglers were probably poor but enterprising fishermen, or in small businesses in Indonesia, who saw a product and a desperate need for that product, marketed it brilliantly and created the industry model to deliver it.  In another time, Australia could well have benefited from the smugglers’  business acumen — their enterprise might have benefited our struggling manufacturing sector.

Neither are the real culprits our Prime Minister Kevin Rudd, with his tough policy of sending boat people to Papau-New Guinea, nor  Opposition Leader Tony Abbott and his even tougher policy of "turning back the boats", plus temporary protection visas and the Pacific Islands  Solution.

No, the real culprits are those Muslim countries  — notably Iran, Pakistan and Afghanistan — which, because of their domestic tyrannies and persecution, not only of minorities but also of Muslim sects they consider  "heretical", created the refugee problem in the first place.  Besides the persecution of dissidents, there is such an absence of freedom in countries operating under Sharia law  that it is hardly surprising they are also the source of the majority of illegal aliens intent on fleeing to Australia. The Muslim countries of Africa have created similar  refugee problems for the democracies of Europe.

Why would an Iranian dentist risk his and his family’s  life to get on an unseaworthy boat to Australia?  Iran is not experiencing an "over-population" problem (its birth rate is below replacement level), with former President Mahmoud Ahmadinejad even offering couples financial incentives to have more babies.  The simple answer is that middle-class  citizens would want to flee only if the lack of freedom were intolerable.

So long as Muslim nations cling to Islamic government, rather than a secular one, so long as these countries are governed by Sharia law, they will remain oppressive and undemocratic and their citizens will lack freedom and want to make their lives elsewhere. 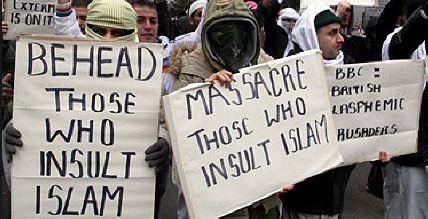 Australia now has a seat on the UN Security Council, achieved at great cost to taxpayers. We should use that forum to target the oppressive policies of the Muslim countries from which the boat people come.  Far from being contrite, the 57-members  of the Organisation of Islamic Co-operation posture tirelessly at the UN, trying to impose a "blasphemy law" on the whole world  — the same blasphemy law that brings death sentences in Iran and Pakistan.

And we should also insist that the oil-rich and stable Muslim countries of Saudi Arabia, Qatar and the Gulf Emirates, which already import thousands of guest workers from the Indian sub-continent and the Philippines,  take their share of refugees and economic migrants.

I  have a temporary solution to the refugee problem: Why not excise Tasmania from mainland Australia, send all Muslim refugees there, and run ads in major newspapers warning  that they will never set foot on the  mainland?  Put  the Greens Senator Christine Milne in charge, with promises of all the infrastructure funding she needs, as Tasmania is a confirmed economic basket case with a declining population and dependence on subsidies. Provide Milne and her vocal Greens colleague, Senator Hanson-Young,  with the appropriate burkas, niqabs and head scarfs they will need.
We have an island of our own, why send refugees to Manus, Nauru or the  Pacific islands?

OK,  the above suggestion is a joke. Forgive me,  I could not resist.

In his analysis of the crisis in Egypt, "Morsi – new symbol of democratic failure", Age columnist Waleed Aly appears to draw a distinction between Islamists and Muslims, the latter presumably being  "moderate". The underlying problem with Islam lies not in the degree of extremism or moderation but in  Islam itself.   The "good Muslims" are the Islamists, as  they practice precisely what their religion tells them. The "moderate" Muslims are  secularists, like those opposing the Muslim Brotherhood in Egypt.  What happens in Egypt has deep implications for the rest of the Muslim world.

Problems for Western democracies with large Muslim populations do not usually emerge in the first generation of migrants, glad to leave their oppressive countries and start a new life. Problems emerge in the next generation, particularly among males. With no normal outlets for socializing with  females in sport and other activities, because of the strict separatism imposed by Sharia, and with indoctrination in the mosques by militant imams, often funded by Saudi money, many young men come to see fulfilment in embracing jihad of one kind or another. Islam does not easily allow them to integrate into Western or even non-Muslim Asian societies. Just look at the Islamic insurgencies in Thailand and the Philippines.

There are examples in recent history of leaders who, despite having been imprisoned for political activities,  rise above personal animosities and the desire for revenge to promote reconciliation and unity.  Mahatma Gandhi in India, Nelson Mandela in South Africa and Martin Luther King in the US should serve as examples to the Muslim world.  What is necessary is for all Muslims to analyse the Koran, the Hadiths, Sharia law and the example of Mohamed in the light of modernity and come up with a reformation.

Babette Francis is the National & Overseas Co-ordinator of Endeavour Forum Inc., an NGO having special consultative status with the Economic & Social Council of the UN. She was born in India prior to the partition of the sub-continent and observed the inability of  Muslim-majority provinces to accept a secular, democratic Constitution which could have avoided Partition.