Charles Copeman, who has died peacefully at 83, was an Australian mining engineer, Rhodes Scholar and business leader of lasting impact. The high recent productivity of Australia’s mining industry is in part due to Charles’ success in reforming work practices at the Robe River mine in the 1980s.

Charles was the youngest of five children of Arthur Bradby and Ellen (nee Briggs) Copeman.  His father was a country teacher who rose to be Head of Brisbane State High.  After rural primary schools and Toowoomba Preparatory School, Charles went on to Churchie (Anglican Grammar) in Brisbane and then to St John’s College at the University of Queensland to study Mining Engineering, graduating with First Class honours. 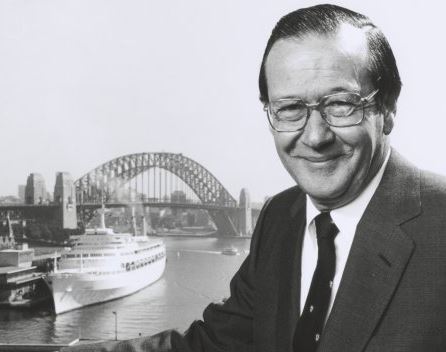 He began graduate work with Rio Tinto Zinc (RTZ) underground at Broken Hill. There, a motorbike accident saw Charles invalided for six months, and left his right leg with permanent damage. Undeterred, Charles applied for the 1953 Queensland Rhodes’ Scholarship, and entered Balliol College at Oxford to study Politics, Philosophy and Economics.  He joined the Balliol Boat Crew and rowed its Eight three times to Head of the River – one of his proudest achievements. In 1956, Charles graduated BA (Hons), and later MA, from Oxford University.

The same year, Charles secured employment in a uranium mine in Quebec and set out on RMS Saxonia for North America.  Fortunately, the voyage across the Atlantic was so rough that his future mother-in-law, Dr Betty Lansdown, was seasick, and unable to chaperone her daughter, Alison Lansdown.
After a whirlwind romance, Charles and Alison married in Montreal in June 1957, and set out immediately for Broken Hill, where they threw themselves into community life, and made many lifelong friends. Alison, despite being a London debutante, adapted amazingly to the Outback.  In October 1958, baby Arthur John arrived, to be followed by Michael Charles in April 1961.

In late 1961, Charles, Alison and their boys moved to Blakehurst in Sydney, and Charles worked on RTZ’s Illawarra coal mines.  In 1964, Charles was seconded to RTZ HQ in London, and the young family moved to Kingston-upon-Thames, near his brother George and sister Margaret.  In October 1965, Elizabeth Belle was born, completing the family with an English rose.

In 1966, RTZ sent Charles to Harvard in Boston to study its Advanced Management Program. But Charles was then restless in a London desk job, and in 1967 was appointed to manage RTZ’s mining operations in Iran. Alison adapted well to another new location (7 in 11 years). She and Charles threw themselves into expatriate life in Tehran, where their mutual love of languages flourished, as they learned to communicate in Farsi.

In 1969, Charles decided to move back to Australia, first to Melbourne with RTZ, and then, recruited by Sir Brian Massy-Greene, to Consolidated Gold Fields in Sydney.  At Gold Fields, Charles had responsibility for coal mines in the Hunter, mineral sands on the Gold Coast, and copper mines in Queensland and Tasmania. In the 1970s, Charles fought to keep open the mine at Queenstown, thus protecting the jobs of many Tasmanian miners.

In the 1970s, Charles was appointed to the Council of the Australian National University (ANU) in Canberra, and enjoyed his regular meetings there, contributing to higher education governance and planning for the future.

In 1980, Sir John Proud asked Charles to move to Peko Wallsend with a view to becoming CEO, which he did in April 1982.  Peko was a diversified Australian mining and manufacturing group, with interests in coal in the Hunter, gold and uranium in the Northern Territory, metal recycling (Sims), pump manufacture (Warmans), battery production (Besco), and soon also in iron ore at Robe River in WA’s Pilbara.

It was at Robe River, in which Peko Wallsend was a one third partner, that Charles was to make his major impact on Australian industrial relations. In the mid 1980s, this large, joint venture, iron ore mine was losing money, and looked like being closed down by its overseas investors.  Charles, with the able assistance of Herb Larratt, set out to do at Robe River what was then thought impossible in Australia – to reform unproductive work practices  – to ensure that the mine could be kept open and become productive and profitable.

Despite a bitter campaign by union leaders and Labor politicians, Charles succeeded in reforming Robe River’s productivity, and turned it into a model for Australian mining operations in future.  One of Charles’ favourite graphs in later years showed how strikes in Australia decreased dramatically after the success of Robe River.  He was proud that Australian business leaders including Hugh Morgan, Roger Corbett and Gina Rinehart cited Charles’ efforts at Robe River as enabling the success of wider business in Australia.

In the late 1980s, Peko Wallsend was taken over by North’s, and Charles retired, shortly to be offered directorships of QBE Insurance (then a small commercial insurance company) and Simsmetal (the metal recycler spun off from Peko).  A third proud achievement for Charles was the major later success of QBE and Simsmetal as Australian and international companies.

In 1990, Charles put his hand up for the Liberal Party (of which he and Alison were long-term, hardworking members) and stood as candidate in the then Federal electorate of Phillip.  As usual, Charles and Alison threw themselves into the campaign with enthusiasm, with much help, but he was unsuccessful.

Charles next put much effort into chairing the fledgling Mosaic Oil Company, and the NSW Firearms Safety Awareness Council.  He also became a Director of the Australian Doctors’ Fund, aimed to support an independent medical profession.  Within the mining industry, Charles was active in promoting scholarships for new students of mining, through the Minerals Council.
From the 1990s through until 2013, Charles and Alison also continued their grassroots involvement with the Liberal Party, including many Palm Beach Branch meetings, and spending election days handing out how-to-vote cards and election nights scrutineering. Charles was a strong believer in democracy, and in the need to ensure fair elections, free of electoral fraud.

In 1998, Charles and Alison moved from their long-term home in Roseville to their holiday home at Palm Beach, where Charles had enjoyed designing and building a novel catamaran. He and Alison entertained many old friends and their expanding family, including nine grandchildren, who gave them pleasure and excitement.  They also enjoyed travelling the world – often by cruise ship, reliving the way they had met – and making many new friends, including the English art expert Sir Roy Strong and his wife.

Charles’ later years were marked by several serious illnesses, through which Alison supported him greatly.  At 80, he developed severe aortic stenosis – which had also troubled his older brothers, George and Herbert.  By this time, Charles was also having memory problems – which had also troubled his sisters, Belle and Margaret.  However, with Alison at his side, he remained widely involved in social and family activities, especially at the Australian Club.

In Charles’ last years, complications of heart problems and of his right leg injury from his 20s, along with his declining memory, meant he had to spend much time in hospital.  Yet, he was very proud to see his grandchildren grow into adults and start careers, and to witness two of their marriages.

Australia will remain a lucky country if it continues to produce business leaders with the foresight, determination and humanity of Charles Copeman.