IT HAS the appearance of a genuine mystery, the whereabouts of that file on Bruce Wilson’s real estate dealings and other matters, the one to which Julia Gillard contributed her legal talents when still a partner at Slater & Gordon. As the law firm’s managing director Andrew Grech told Fairfax Media – yes, even Fairfax has finally caught the scent of this scandal – the papers are not to be found.

‘‘We have not been able to identify any such documents following extensive searches of our archival records,’’ Mr Grech was quoted as saying. “If there are such documents, we don’t have them. They could have been misplaced, or lost. I simply don’t know.”

Well those papers exist somewhere, because copies of quite a few are in the possession of Michael Smith, the 2UE radio host fired last year when he showed what management evidently believed was too great an interest in the Prime Minister’s shadowy past. Quadrant Online also holds a sheaf of documents relating to the establishment of the AWU Workplace Reform Association, the bogus entity established with Gillard’s legal guidance that Wilson stocked with contributions from building-industry employers, who thought they were backing a fund aimed at reducing workplace accidents. The truth was that their contributions provided the $21,000 deposit (and a lot more besides) on the purchase of 1/85 Kerr Street, Fitzroy.

It was “a slush fund”, Gillard told her partners when called in to explain what she and her boyfriend had been up to. And we know the file existed then because, about half-way through the “please explain” interview preceding her exit from the firm, partner Peter Gordon (PG) has this exchange with Gillard (JG):

PG: OK. Julia, the file that you gave us last Monday, that you gave Paul last Monday, could you just describe to us the circumstances in which you came across it, I think it’s exactly right in front of you, isn’t it?
JG: Yes, that’s right.

Another document may shed some light, or at least indicate where further questions about the file’s fate might be directed. It is the 48-page affidavit signed on September 19, 1996, by Ian Cambridge, then the Joint National Secretary of the AWU, and detailing his forensic investigation of Wilson’s shady bank accounts, of which the Workplace Safety Association was but one of several. 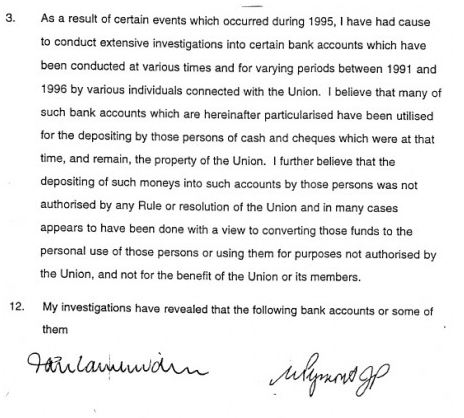 How much was paid into them, where at least some of the money was spent, and union officials’ actions when the scam to light were all grist for Cambridge’s mill. On the final page, in paragraph 58, he states:

“I believe that the file held by Maurice Blackburn & Co. should contain details of the irregular and invalid payments made by [Bob] Smith, [Bruce] Wilson and [ ] Collins on 17th and 18th August 1995, and any other irregularities that may have occurred in relation to the union’s finances concerning the activities of these persons at about that time. I am concerned that the refusal of Smith to deliver the solicitor’s file is an attempt by Smith to cover the true nature of his activities at this time….”

Why Maurice Blackburn & Co? Because the AWU dropped Slater & Gordon as its counsel when Wilson’s predations came to light and moved its legal business to Melbourne’s other leading labour law firm.

Could it still be there, perhaps tucked away in a filing cabinet, and if so, what is in it? Wilson’s first attempt to register his Workplace Reform Association was rejected by authorities in Western Australia, who noticed it did not meet legal requirements. This was later rescinded when Gillard formulated the association’s articles and filled out part of the registration form.

Could there be a paper record in that missing file of Gillard’s efforts on her lover’s behalf? Might there also be some mention of another matter that came up at her exit interview — the question of renovations to her Abbottsford home, for example? Toward the end of her taped interview with Gordon she says:

“Julia, it’s been put to a partner of Slater & Gordon in the last week that there exists a receipt with respect to renovation work conducted at your home which is in some way connected with funds from the Australian Workers Union Workplace Reform Association account.”

JG: when we were not on tape [I was asked] a series of questions about things that I have had done to the house that I don’t recall getting invoiced for. It occurred to me that one of those things is, and Geoff has actually seen this with his own eyes. Bill the Greek, whilst I was at work one day, built for me a low level brick fence. I didn’t ask him to do that. The result was truly hideous and I think Geoff saw it when he dropped me off one night and everybody else who’s passed my house has commented on it. In order to try and make it look less hideous, part of the work that Con was to do was to mortar it and put pickets on it that goes like that to try and stop it looking quite as Greek, dare one say.

I didn’t, I’ve never, I didn’t pay for the bricks, I didn’t pay for the bricks. I’ve never had an account in relation to the fence. Now, I don’t, I don’t know what that means about where Bill got the bricks from, and I don’t know whether that means anybody worked with him on the fence, that I haven’t paid. He, you know, he pleased as punch sort of said he had built it for me. That he had built it for me. Whether that means he himself did it, given Bill’s obvious difficulties with the truth I no longer know.

PG: What are Bill’s obvious difficulties with the truth?

It would certainly be interesting to peruse that file, and given that Gillard has  insisted she was but “a young and naive” partner of one of Australia’s largest and high-profile law firms, a reasonable person might think she would be very keen to quiz Nicola Roxon about her recollections in order to clear her own name.

Because Australia’s current Attorney-General was working at Blackburn & Co. at the time and a key member of the team overseeing the AWU’s recently transferred business.

Who knows, Roxon might even appreciate the opportunity to re-live old times and glory days, when she was romantically involved with the AWU’s Bill Shorten and a pair of strong, competent women were making their way up the ladder of Labor politics.

And anyway, even if Roxon’s memory isn’t so sharp, she might still find the topic preferable to ducking all those other questions about her decision to spend $750,000 of taxpayer money on lawyers in the matter of James Ashby and his $50,000 settlement

So, You Thought He Was a Choir Boy?