Signing off on Alan Jones

OF ALL Australia’s many shames, few can rival the disgrace of being forced to share the continent with the likes of Alan Jones, who quite clearly needs to be silenced, ruined financially and shunned by all decent people and former advertisers. Oh, and by at least one telegenic marsupial as well, which is evident from the ever-growing list of those who have signed a much-touted online petition calling for the radio host to be gagged once and for all.

A politically engaged macropod, you ask? Well, yes, and the proof is in the screen shot below, which announces “Skippy Bush Kangaroo” as one the latest aggrieved Australians to give Jones a good kicking via Change.org’s online petition. 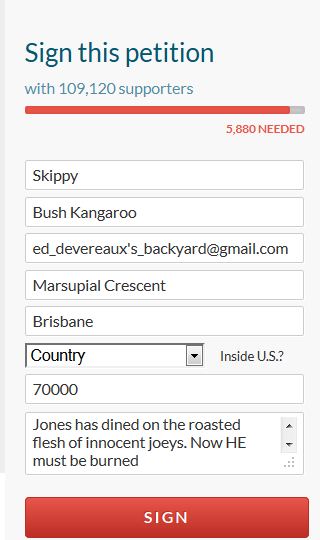 Ever since the  push was launched, quality journalists, especially those of the ABC and Fairfax variety, have been updating the latest tallies of signatures as part of their blanket coverage of the radio compere’s general foulness. Early on in the gag offensive, the Silly Moaning Herald’s Phillip Coorey was delighted to announce the petition’s existence by reporting it had “already gained more than 12,000 signatures.” The next day, when Coorey’s byline was joined by that of colleague Damien Murphy, their news was of sponsors “lining up to withdraw advertising as more than 36,000 people signed an online campaign”. By week’s end, Michelle Grattan had wheeled herself to the keyboard, where she tapped out an update. “A petition to put pressure on advertisers and sponsors,” she noted, had garnered “more than 100,000 signatures”.

Grattan’s epistle is particularly laudable, as a reading of her column suggests it was initially devoted in its entirety to Abbott’s well-established disdain for women, but had to be slightly re-written at the last moment. These things can happen when news breaks that a very recent Federal president of the ALP has just been charged with 20 counts of playing fast and loose with power, records and unionists’ dues. Ever the consummate pro, Grattan must have fiddled with the opening paragraphs to include mention of that little matter before returning to the original theme and amplifying yet again those much more important questions about Abbott’s temperament and character.

As anyone who has read Finko & Ricketty’s lament for Australia’s dearth of quality journalism will know, your reputable reporters always make sure sources are credible, their journalists’ eyes forever sharp for scams or fiddles intended to mislead the public. After all, if they were to do no more than regurgitate as established fact the talking points emailed to them by partisan organisations, they would have no claim whatsoever on the title of “quality journalist”. Why, they would be no better than stenographers and volunteer publicists!

We can therefore assume that Coorey, Grattan and all the rest checked out the online petition’s mechanics and satisfied themselves that it is impossible for those who detest Jones to sign the petition with a false name or, more to the point, a bunch of false names.

It is just as well they invested that legwork because we can now place an absolute trust, as professional journalist have done, in the petition organisers’ claim to represent the vast bulk of fair-minded Australians, not to mention activist kangaroos

Who would have thought that Cotton Mather, godfather of the Salem witchhunts, might take up the crusade against 2GB’s embodiment of opinionated evil? 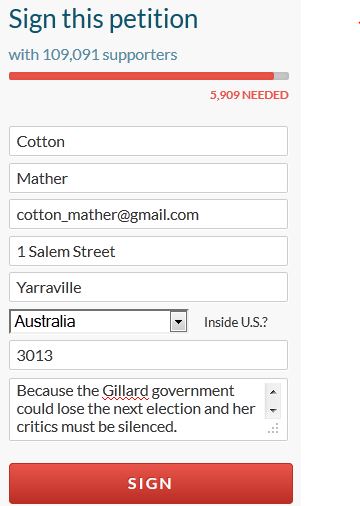 Well his signature was accepted and added to all those other Jones-a-phobics, along with Anton Drexler, founder of Germany’s National Socialist Party. Even Andrew Bolt has signed up, no doubt because he has come to appreciate at last that free speech is a liberty from which his vile opinions preclude him.

Other signatures organisers may find on the petition’s manifest include  a Mr D. Duck and his life partner, Mr M Mouse; former TV personalities Bobby Limb and Dawn Lake; explorers Burke and Wills, Phar Lap, the Magic Pudding, and Ronald Ryan, whose reputation for having been the last man hanged in Victoria is no barrier to expressing a loathing for Alan Jones.

Why, even Jones himself is backing the anti-Jones petition, according to the ever-updating roster of the latest signatories on the change.org site! 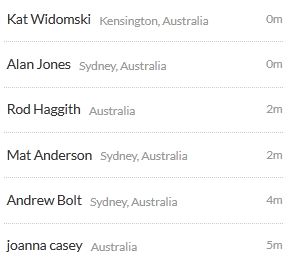 IMPORTANT EDITOR’S NOTE: Professor Bunyip’s trusting nature has betrayed him. An investigation by Quadrant Online’s technical staff has revealed that it is very easy to stack the Change.org petition with fictional signatures. Very easy indeed.

Change.org could have instructed its publishing system to accept only a single entry from any one particular IP address (every computer’s individual identifier), which is what Fairfax Media does whenever it runs an online poll on The Age or Silly sites. This inhibits organisations like, say, GetUp instructing members to rig the poll by hitting it hard and often, at least until they have gone to the trouble of deleting from their hard drives the “cookies” which identify those who have already voted.

In every case, no matter how bogus the latest signature, its acceptance was recognised with this acknowledgement:

What all this means is that no one, other than basket-weaving simpletons and members of the Canberra press gallery, should take the Jones petition seriously.

Advertisers who rushed to abandon Jones’ show might want to consider if they have been gulled, which could prove painful if they are in their turn boycotted by Jones’ admirers and/or those who refuse to endorse cowardice with their consumer dollars.

A RESPONSE FROM CHANGE.org

I’m delighted you had some fun inputting fake names onto the petition at Change.org, but I’m sorry to have to disappoint you – you’ve wasted your time.

Change.org uses some of the most sophisticated anti-spamming technology and techniques available anywhere in the world and we are confident in the integrity of our data.

We deal with spam in a number of different ways. Of course, we don’t reveal precisely how we deal with spam, so as not to tip off those who might try to get around our protections.

Our anti-spam approach is based on sophisticated pattern analysis that looks at:

Also, if a fake email address is entered (ie a confirmation email bounces), the signature will not be added to the total.

The reason it appeared that your fake names were accepted is that some of these anti-spam measures are applied in real time, while others take place retrospectively. In other words, the website is constantly “cleansing” itself of fake signatures.

Taking a screenshot of fake names being entered is not proof that there is a flaw in our system.