An Ozzie on Constitution Avenue, July 4

What luck! To be in Washington on Independence Day.

To be able to watch the big parade down Constitution Avenue, flanked by so many majestic and classical buildings as a backdrop. This is the capital-C celebration of the Declaration of Independence.

I may be burned at the stake at Moonee Ponds Junction for saying this, but the experience made me feel good about America. So many thousands of patriotic families celebrating their country’s founding and progress, a sea of red, white and blue.

All morning troops of families, oldsters and youngsters ambled towards the Mall, in palpable excitement. Stars and stripes were everywhere, on toddlers, pushers, hats, banners, and T-shirts. Most groups carried a forest of small flags. In patriotism, there was no distinction between the accoutrements of blacks, whites and in-betweens of Asian and Latino stock.

Washington is in the grip of a heat-wave, with centuries (Fahrenheit of course) more or less daily for the past fortnight and forecast for a further week. This is a muggy heat and to skip ahead a bit, water-carriers went with every marching group. Some marchers even incorporated a dangling water bottle into their Ruritanian uniforms.

For some reason I expected a sterner tone to the march, perhaps because of Anzac Days. In fact it’s a march largely of elaborately costumed high school bands and novelty groups. Very small contingents, maybe 30 each, represented the Army, Navy and Air Force, and the only military equipment involved was their rifles. Here and there through the parade, a rank of four flag-carriers would have a rifleman on each side. Some school displays involved rifle-twirling but the rifles were unashamedly bits of white-painted wood.

There were two other military reminders: several black-painted floats honouring the Missing in Action & Prisoners of War (who were treated as a special case in the parade), and a tableau of the Iwo Jima flag-raising photo, the tableau I think being about the flag rather than the victory.

I happened to get a spot at the precise start of the parade, under a shady tree. There was no pushing and shoving, and elderly people who had brought picnic chairs were tacitly permitted clear sight-lines, resulting in unoccupied territory which I initially found perplexing. In fact I invited some short kids at the back to make use of the spots, but the assertive sitters ordered them out again, to the approval of others around.

Given the long wait before the parade, I struck up a conversation with a young executive from out-of-state. He made the polite but rather dispiriting comments on all my stories, either "That’s cool" or "That’s too bad".

The show was led off by a pack of no-nonsense coppers on Harley-Davidsons. Behind was a police car that was boarded by some senior police, including a tall athletic blond about 40 years old. 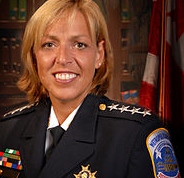 (Googling later, I found Cathy Lanier [left] had been a high school dropout and unwed mother at 15, but became a crime-fighter and at one stage ran the District of Columbia narcotics and gang-busting unit. Her MA was not in organisational design or similar, but "Preventing terror attacks on the homeland." I couldn’t help make a mental contrast with Victoria’s ex-commissioner Christine Nixon. Her counterpart here could definitely run down and tackle a malefactor in an alley).

Each arriving contingent was met with tireless whoops and cheers. The only sombre note was the expression on the face of the policewoman [below] assigned to watch our 10m section of the crowd.

Her gaze never lifted from us in two hours; it was frightening in its intensity.

To get in the parade, high schools and community groups undergo a competitive selection process, followed by nomination from a state governor. The overall goal is for each state to be represented. Each school sought to out-do in splendour of uniform, with lashings of gold braid, contrasting colours and cockaded hat-wear. None of the bands, fife or drum corps that I saw used music sheets, they kept good formation, and heaven only knows how much practice and discipline had been needed to reach such standards.

Some schools used other formulas. For example, one group was all on unicycles, ranging from nearly 2m high to little unicycles for kids of 6 or 8. They all managed to carry the flag in one hand.

Giant balloons (and I meant ‘giant’) were de rigueur, in the shapes of Uncle Sam, the flag (of course), bald eagles, Yogi Bear and other kids’ icons. There was a hot wind down the avenue and it took around 30 rope-handlers to keep each towering balloon somewhat under control.

There was only one float a feminist could object to – featuring the winners of some sort of Miss Teenager contest.

A number of floats and groups celebrated ex-immigrants, especially Vietnamese, and some ethnic groups such as Pueblo Indians were clearly there for their folk talent and enthusiasm rather than polish. Which interest groups got the nod for the parade was arbitrary – there was no attempt at giving any sectoral claimants equal time. In fact, the only overtly religious-type groups represented were Hari Krishnas and Falun Dafa.

The main commercial activity permitted was selling bottled water. Throughout the march, people with sacks would patrol the crowd and people would toss them their empties. I had the impression that at parade’s end, the avenue would be rubbish-free.

As soon as the parade ended, most people hot-footed it to the nearby shady parks and ornamental pools, police vigilantly keeping revellers out of the water itself. I was amazed to find the museums and galleries along the mall were open – they appear to shut for only two days per year, a practice that would send any Australian counterpart broke.

To sum up my impressions:

There is an impressive level of public-spiritedness among American high-schoolers, with those represented here having made enormous sacrifices of their leisure time to put on a good show

The politically-correct element yesterday was positive – concern for the aged and handicapped, a genuine blindness to ethnicities, and a determination to celebrate progress and hard-won freedoms.

I could draw some parallels with contemporary Australian culture, but prefer not to be a whingeing Ozzie.

Tony Thomas, a retired journalist since 2001, is in Washington on a well-earned break.

A blight at the opera