The new Napoleon exhibition at the National Gallery of Victoria, is an extremely impressive and exciting collection of 300 works, includes drawings, engravings, statues, furniture, textiles, clothing , porcelain, right down to stunning and opulent gold and silver Napoleonic “bling”.

Napoleon unambiguously restored law and order to the chaos following the French Revolution to become one of the world’s most powerful and visionary rulers – or, if you prefer, an obsessive warmonger, tyrant and usurper. Certainly, in this exhibition, there is no ambiguity over the monumental and profound effect he had on France and Europe.

The historian Victor Davis Hanson gives harsh appraisal: "After all, the military record is unquestioned—17 years of wars, perhaps six million Europeans dead, France bankrupt, her overseas colonies lost”. Whilst others, the British historian Vincent Cronin, claim that those wars which bear his name, were due to the fact that France was the victim of a series of coalitions which aimed to destroy the ideals of the Revolution.

Indeed, the meme of powerful conqueror, the cult of a Roman like emperor is richly demonstrated in this NGV exhibition: paraphernalia, design, uniforms and statues all give voice to this self-conscious conceit. It can be seen in Marie-Victoire Jaquettes Napoléon I in coronation robes 1813–14, in designer Antoine-Denis Chaudet’s French Imperial Eagle of the 6th Regiment of the Light Cavalry in gilt bronze, and in the exhibitions dominating bronze bust with Roman laurel wreath. 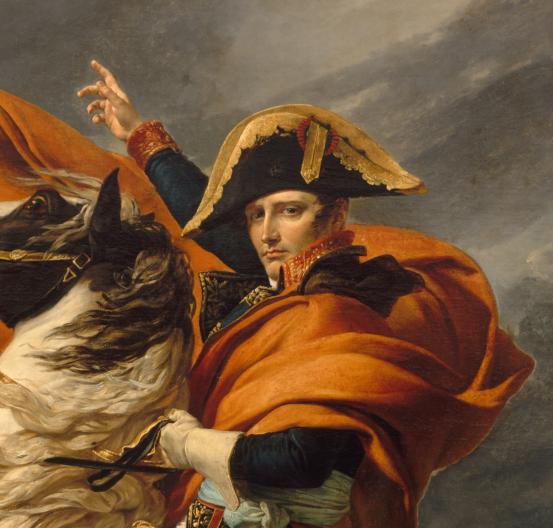 We should also not forget a photo of his construction of the Arc de Triomph in Paris at the top of the Champs Elysée with its imposing Roman iconography.

What this exhibition demonstrates so clearly is the allure of imagery along the propagandist mould. Napoleon understood this well, and was clearly a precursor to Stalin, Hitler and Mao Zedong. Central to the exhibition – and used in NGV’s promotional material – is the famous Jacques-Louis David’s Napoléon Bonaparte, First Consul, crossing the Alps at Great St Bernard Pass, 20 May 1800. The painting is large at over two and a half metres tall, and like all familiar iconography, very exciting to see in the original. However, by way of contrast, one should compare it to the more realist version painted by 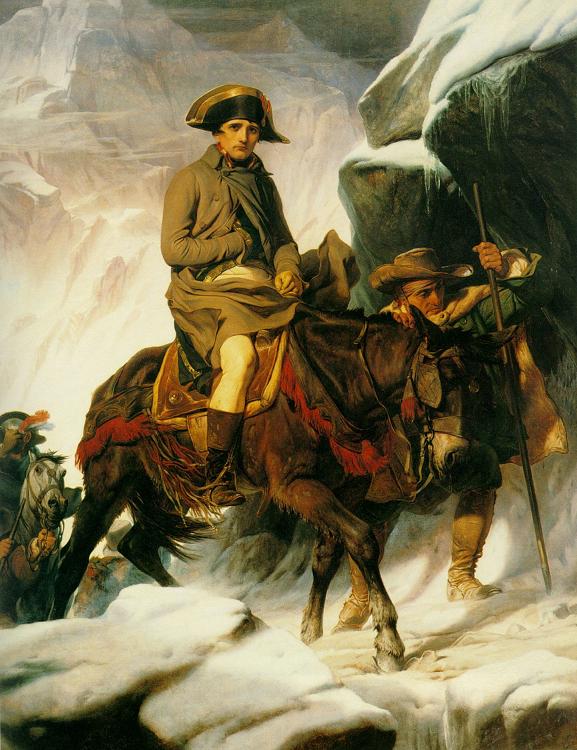 Paul Delaroche of Bonaparte crossing the Alps, cold, tired, disheveled, painted in 1848 well after the shine had gone off him.

Notwithstanding Bonaparte’s obsessive war-mongering, his reforms should also be remembered. He introduced the Napoleonic Code which systematically codified civil, family and criminal law. He had a Concordat with the Catholic Church, undertook infrastructure development and established the Banque de France. Remarkably, he emancipated Jews, opening up their ghettos and giving them rights to property, worship, and encouraged them in careers. This had a dramatic effect on their subsequent integration into the economy. Against much religious criticism and hostility, he believed Jews should be treated the same as “any other citizen in our country”.

The delight, of course, in any grand exhibition of this type for us antipodeans, is that it materially brings us closer to those events in faraway Europe, to the point of feeling and imagining that distant world’s realities. The physicality of Napoleon is present in an actual lock of his hair and, almost titillatingly, his famous two horned black hat, and other war uniforms and paraphernalia. Some large photos, notably one of the Council Room at Malmaison designed as a military tent and Empress Josephine’s bedchamber, also designed as a tent, both at Malmaison, manage to bring us closer to his domesticity and personality.

Whilst peripheral to the main story of ‘Revolution to Empire’ , the Australian connection in this exhibition is not without interest. Both the First Consul Bonaparte and his Empress Josephine were interested in Australia, and he sent Nicolas Baudin on an ostensibly geographical exploration to map the one part of the ‘missing’ Australian coastline, collecting kangaroo and black swans along the way to take back to Malmaison. Baudin named this south eastern part of Australia Terre Napoleon. At that very time however, he met Matthew Flinders, who had just completed his own map of the very same coast.

There are some portraits of Aboriginals, and a curious musical score of an Aboriginal song and the famous Australian “Coo-Eee”, which appears to be derivative. We must remember that Baudin’s “exploration” called in briefly to an already booming Sydney and, ravaged by scurvy, he and his crew had to be helped into Sydney harbour.

The hypothetical question of what Australia may have been, had it been settled by the French has often been speculated and I heard a group at the opening raising the question yet again. It is disputed, or at least unclear, that Baudin’s visit had anything to do with rival settlement plans, his trip coming on the heels of Bougainville, La Perouse and d’Entrecasteaux. However, a delightful, and perhaps apocryphal hand-coloured etching by James Gilray – in the NGV’s own permanent collection as it happens – was displayed right next to the map of Terre Napoleon. Titled, The plumb-pudding in danger or State epicures taking un petit souper, and drawn in 1805, shows France carving out a fat European cheek from a ‘pudding like’ terrestrial globe. The Brits however simply cut the globe in half, underlining the superiority of Britain’s navy and overall control of the world.

A final wistful connection between Australia and France is drawn in a moving watercolour of Napoleon’s tomb on the island of Saint Helena [c.1829] by English painter Augustus Earle. In the windswept landscape we see a copse of weeping willows, trees that were brought from St Helena to Australia and that now line many of our creeks and rivers.

The exhibition is a quite brilliant collection of outstanding pieces, and the jewelry, furniture design and sumptuousness of this Imperial order is very impressive. It is a testament to a distant and glorious moment in French history, It has the sad echo of what was and what is no longer – l’exception française – and, like a visit to the Forbidden City in Beijing, conveys a certain emptiness in the vanity of worldly pursuits, echoed in the presence of Napoleon’s gilded throne.

This is a very stimulating exhibition and well worth seeing.

‘Oui’ to gay marriage, but a big ‘non’ for restraint