Brown down, deeper and down

So why has Bob Brown stepped down?

Could it be that he has received secret instructions from the Planet Zort to await a rendezvous with the Mother Ship? 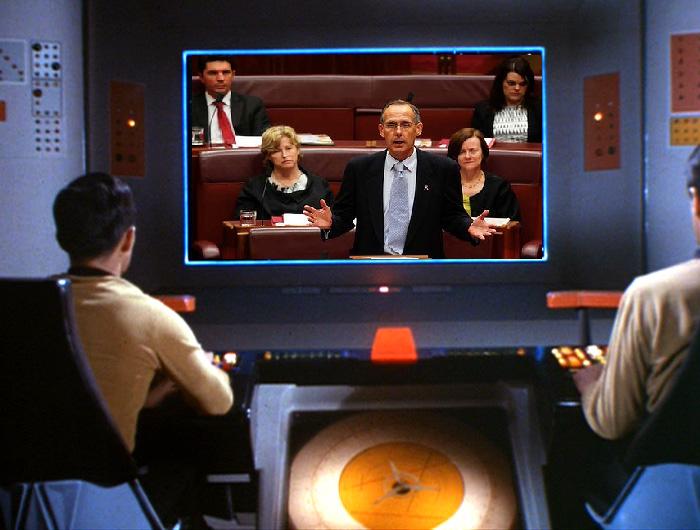 Or could it be that he has actually read the writing on the wall in the real world, and knows that his head will be on a plate after the next federal election?

Bob Brown must be one of the most unpopular men in Australia. His reign as acting Prime Minster on alternate days of the week has been for many Australians the last straw in the ghastly ongoing charade of the Gillard government. Even rusted-on Laborites have ground their teeth in despair when confronted with the Greens’ intransigence and reckless demands on an increasingly-strained economy.

And their gaze has, as always, turned to Brown – the living embodiment of all that’s wrong with the inner-city nomenklatura, and the vast gulf that exists between them and the rest of the country.

No wonder he’s stepped down. He can take a tidy retirement package, continue to pontificate from the sidelines, and all without ever having to face that fact that in a representative democracy, when people think you suck, they vote you out of office. I think we will be seeing a lot more of this in days to come. If being out of office means that you can be made Foreign Minister, then why bother going through the motions of pretending to like your electorate?

While on the one hand I’m revelling in the rapid disintegration of this government, I’m starting to wonder if perhaps we need to introduce an amendment to stop MPs retiring before their term is completed. How many more electorates will be betrayed by people who promised them everything at election time, and then not only failed to deliver any of it, but stood down because they were too chicken to face the music and dance?

A Democracy if We Can Keep It

How To Be a Political Columnist