You have sat too long for any good you have been doing lately…
Depart, I say; and let us have done with you. In the name of God, go!
Oliver Cromwell, Lord Protector of the Commonwealth, 1653

With the near destruction of Australia’s live-cattle export industry by the incompetent actions of the Minister of Agriculture Joe Ludwig to add to her list of non-achievements, for just how long can the Prime Minister, Julia Gillard, and her incredibly bumbling government, hang on to power?

Is their no limit to their ability to make the worse possible decision within any given situation with which they are confronted? Has any government of Australia, since 1901, made such a mess of just about every action that they have undertaken? Has there ever been a Labor government that has made so many loopy decisions to correct so many non-existent problems?

Indeed, has there ever been any government, ever, that has so totally lost the right to govern this nation? The closest was the debacle of the Whitlam years — but at least Gough could clearly articulate an argument — and he knew heaps about old Greek ruins. The present Gillard government is notable only for creating new, Australian ruins. 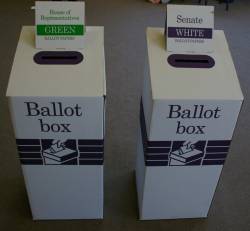 Before the Gillard/Rudd years the economy was working; the nation’s bank account was in the black; there were no illegal-immigrant problem; there was no $2 billion pink-batt fiasco; there was no wasteful commonwealth building programme like the schools BER buildings mess; there was no industrial chaos within the work-force and there was no master-puppeteer (Green) pulling the strings of John Howard. There was no $200 billion of loans for unnecessary Commonwealth expenditure and m/s Nanny State was mainly in her place, causing little aggravation to the average Australian citizen.

With the coming to power of the Rudd/Gillard/Swan nexus everything changed. Kevin Rudd was elected by the power of slogan and spin with very little actual policy or Labor philosophy in his briefcase. This was immediately obvious with Rudd’s need to call for “ideas” from 1000 people of “intellectual substance” — ideas which he quickly ignored. Unfortunately Rudd, and then Gillard, fell back on the usual suspects and the rot started to set in. Senator Evans dismantled the illegal immigration controls; Senator Conroy set out the plan for a NBN on the back of an envelope while on a flight with Kevin Rudd; Peter Garrett went bats with batts and Julia started blotting schoolyards with luxury halls and yard-shelters for, oh, say $700,000 a pop. And you no longer had any work choices.

Indeed since 2007 our government has carried on like a teenager with their first Visa Card. There has been no problem (that they have created) that can’t be fixed with money. Just book it up. Bung in on the credit card, she’ll be right. All this to the tune of $135 million a day of borrowings!

The obvious thing in all this chaos, the bit that was missing, was the need to consult with people who might have had something to offer in the way of a caution, an alternative opinion — some advice that might have countered the arguments from the usual left-wing operatives. No — the Rudd/Gillard formula was to consult only with people who agreed with the Rudd/Gillard propositions. It’s “Yes Minister” reborn — without the laughter.

Turning a deaf ear to anyone who might have contributed to the argument, and science, on climate change has been sidelined. No counter opinion, other than the Garnaut holy-writ, either economic or scientific, was considered. In the past 12 months Julia Gillard has only listened to what she wants to hear. As the various Ross Garnaut reports are being questioned both in Australia and overseas, the Gillard government remains cocooned in some sort of chrysalis, totally oblivious to any alternative opinion or advice.

Now, for the first time in living memory, the Labor Party is being questioned as to exactly what it stands for, and indeed, believes. The days of tired and weary coalminers and steel workers are gone. The days of under-payed doctors and nurses is a memory. Most workers today have non-overcrowded homes, a car, wide-TV screens and take holidays. The bare-footed school kid with his or her lunch wrapped in newspaper is a thing of the past. So, almost, is the Australian Labor Party. Only in the eight to ten weeks of an election campaign do you hear faux-anguish on behalf of “working families”.

Today the typical ALP Member of Parliament wears a snappy suit, drives an expensive car and lives in a non-workers cottage. Their sole interest is gaining power and retaining that power. The Labor philosophy now is to react to issues. Many of those issues are other peoples, such as the Greens and/or the independents. Or they are issues that deflect attention from the Gillard government’s shortcomings. When some patients at the Launceston General hospital have had their surgery cancelled up to eight times, and have waited months , if not years, to get to the top of the surgery lists — is Health Minister Roxon dealing with this, working-family issue? No! She has taken on big tobacco for a plain package fight. Clever move — dumb politics. Or should that be clever politics — dumb move?

Now Senator Ludwig has managed to overreact to a predictable outcry after the broadcast by the ABC of the treatment of Australian cattle in four Indonesian abattoirs. To ban all exports of live cattle because of four rogue slaughter-yards has managed to highly offend Indonesia and possibly destroy an Australian industry. This was a problem that Senator Ludwig knew existed. He was the responsible minister. An instant flight up to Djakarta would have been the logical thing to do. He could have ignored the shrill of the Greens and acted with the $360 billion northern cattle industry in mind, and sorted out the four dodgy meatworks. No, he introduced an export ban and solved nothing.

What has been really remarkable during the Rudd/Gillard years is the lack of any accountability by the members of the government. No one is ever held responsible. No one is ever to blame! You can make the multi-billion stuff-up and never loose your job. It’s like magic. The blame just simply drifts away like CO2. You can’t see it, smell it or feel it! Magical stuff.

With the move by Senator Brown to seize the presidency of the senate with the change that July 1st demanded, the grab for power by the Greens is now evident. Gillard is in a Rasputin situation, with a manipulative green-monk stalking her every move. It really is time for a fresh election. Enough is enough.

Julia … for the country’s sake, GO!

The Kurds’ Struggle Is Our Struggle